During a joint virtual press conference with Tokyo 2020 chief Seiko Hashimoto, Bach — who arrived for the Games last week — said the people of Japan could be confident that the Olympic committee is sparing no effort to ensure the event is “safe and secure.”
“You have done a fantastic job in preparing … This is even more remarkable under the difficult circumstances we all have to face,” Bach added.
Tuesday also marked the opening of the Olympic village, where the majority of athletes will stay during the course of the Games.
READ: USADA wants fair cannabis rules as White House calls for meeting 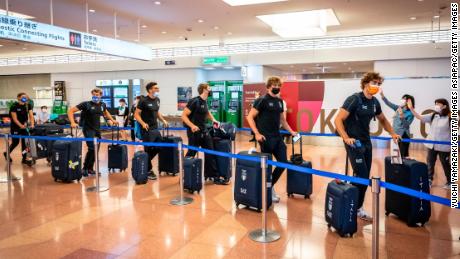 Read More
Over 11,000 athletes from 205 National Olympic Committees will compete in Tokyo with around 85 percent vaccinated against Covid-19, according to the IOC.
Delegations from Italy and Great Britain were among those to land in Tokyo on Tuesday.
READ: Tokyo hotel apologizes for ‘Japanese only’ elevator sign
“After all this additional stress during the pandemic, finally (athletes) can shine on the Olympic stage. And I hope that they will, under these circumstances nevertheless, enjoy it to the fullest,” said Bach.
The Olympics will take place amid a coronavirus state of emergency in Tokyo following a fresh surge in cases. It was announced last week that no fans would be able to attend venues in the capital city during the Games.

International Olympic Committee (IOC) president Thomas Bach has called Tokyo the “best ever prepared city” to host the Olympics with 10 days to go until the opening ceremony.