Protests erupted last week as former South African President Jacob Zuma, 79, turned himself in to authorities to serve a 15-month jail term for contempt of court. He had refused to appear at an anti-corruption commission to face several allegations, including bribery and fraud, which he has repeatedly denied.
Among those killed in the violence were 10 who died in a stampede in the township of Soweto, Police Ministry spokesperson Lirandzu Themba told CNN. More than 1,200 others have been arrested in the provinces of KwaZulu-Natal — where Zuma is from — and Gauteng. 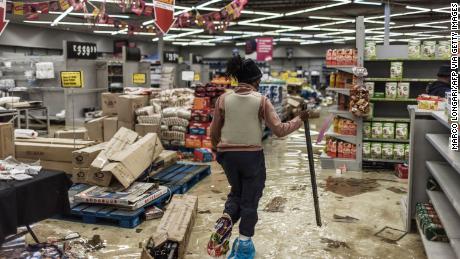 For almost a week now, protesters and looters have set malls ablaze and clashed with police, who have fired back with rubber bullets and are now so overwhelmed that the military has been brought in to back them up.
CNN on Tuesday visited Soweto, where shop owner Rahman, who did not provide his last name, said he is afraid he’s lost everything.
Read More
“Even right now where I’m going to stay, what I’m going to eat, what I’m going to do — we don’t know nothing. Really, we lose everything,” he told CNN.
“It’s very painful, and I don’t know what I can say about that. This is not our fault. I don’t know what happened with the government. We don’t know but this is not our fault. We didn’t do nothing. We just lose like that.” 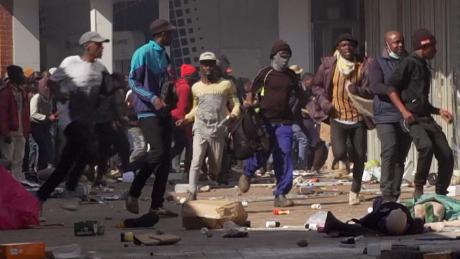 Soldiers patrolled the streets of Johannesburg in armored personnel carriers Tuesday, holding rifles with live ammunition as the military worked to gain some sense of order following the violence.
South African Police Minister Bheki Cele vowed to curb the continuing violence that erupted over the weekend.
“We cannot allow anyone to make a mockery of our democratic state and we have instructed the law enforcement agencies to double their efforts to stop the violence and to increase deployment on the ground,” he said, pleading for those demonstrating to do so peacefully.
“No amount of unhappiness or personal circumstances from our people gives the right to anyone to loot, vandalize and do as they please and break the law.”
The government in neighboring Botswana on Tuesday issued an advisory for its citizens to avoid unnecessary travel to parts of South Africa.
On Monday evening, President Cyril Ramaphosa addressed the nation to call for calm and announced the military would be deployed in the impacted provinces. He acknowledged the protests and looting may have started with political grievances, but said “opportunistic” criminal elements had taken over. 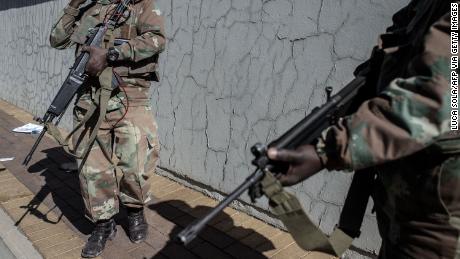 He also warned continued protests and looting could further undermine the nation’s Covid-19 response and vaccination rollout, with several vaccine sites forced to stop administering doses over the violence.
The country’s Covid-19 death toll has been surging since June and doctors describe a system beyond its breaking point — with insufficient hospital beds and barely enough oxygen.
Zuma handed himself over to police last week after days of speculation over whether he would comply with the court’s orders to imprison him. Zuma’s lawyers Monday argued for a sentence reduction.
Zuma served as president from 2009 to 2018 and was once widely celebrated as a key figure in the country’s liberation movement. He spent 10 years in prison with anti-apartheid hero and former President Nelson Mandela.
But his nine years in power were marred with allegations of high-level corruption.
Zuma is accused of corruption involving three businessmen close to him — brothers Atul, Ajay and Rajesh Gupta — and allowing them to influence government policy, including the hiring and firing of ministers to align with the family’s business interests. The Guptas deny wrongdoing but left South Africa after Zuma was ousted from the presidency.

The number of people killed in days of protests in South Africa rose to at least 72 on Tuesday, police said, as soldiers and police on the streets struggled to quell some of the worst looting and violence the country has seen in years.