Denmark goalkeeper Kasper Schmeichel had the laser shone in his face as England captain Harry Kane stepped up to take an extra-time penalty.
Schmeichel saved the penalty, but Kane pounced on the the rebound and his goal proved decisive in a 2-1 win which ensured England’s passage to Sunday’s final against Italy.
European football’s governing body said it had opened disciplinary proceedings and has charged England with the use of a “laser pointer by its supporters.” 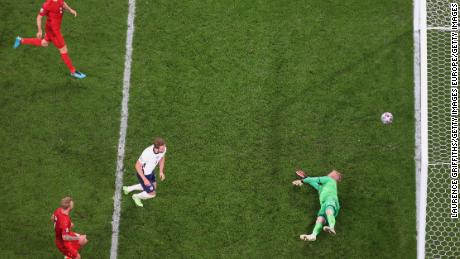 READ: England reaches first major final since 1966
Read More
UEFA said its disciplinary investigation will also look at “disturbance” caused by England supporters during the national anthem and the lighting of fireworks by its fans.
Broadcaster ITV, which televised the match in the UK, showed footage of a green laser being pointed at Schmeichel’s face.
`”Whoever they are they’re an idiot … it’s stupid and he doesn’t deserve that,” ITV presenter Mark Pougatch said. “That sort of thing, nobody wants to see.”
After the incident, the English Football Association’s on-site team worked with UEFA to try and find who had used the laser device.
“The Danish FA representative confirmed to the UEFA Match Manager that they did not wish to take the matter any further,” according to the English FA.
The Danish Football Union did not immediately respond to CNN Sport’s request for comment.
The disciplinary case will be dealt with by the UEFA Control, Ethics and Disciplinary Body. 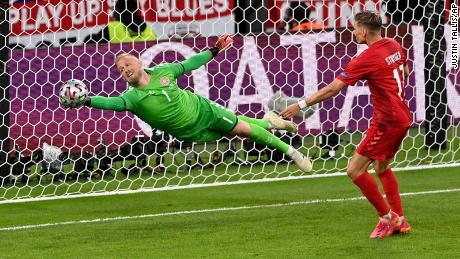 Meanwhile UK Prime Minister Boris Johnson has sent his congratulations to the England players and the team’s manager Gareth Southgate.
“Well, I thought it was the most extraordinary game, and obviously I don’t think I’ve ever seen an England team play with such creativit, flair, versatility and just keep going like that,” Johnson told reporters on Thursday.
“It was a total nail biter. I don’t know about you, but when we conceded that goal early on and then equalized, and then ran on right the way into extra-time.
“It could have gone wrong at any stage, but it didn’t and it was just euphoric. Absolutely extraordinary. So I congratulate Gareth Southgate and the whole team. I thought they were stunning and obviously, you know, wishing them all the very best for the Sunday.”
Later on Thursday, UEFA Referees Committee announced that Dutchman Bjorn Kuipers would referee Sunday’s final.
This will be Kuipers’ seventh UEFA competition final, according to European football’s governing body.

UEFA is investigating the pointing of a laser at the key moment of England’s Euro 2020 semifinal win over Denmark on Wednesday.