Jesuit priest Stan Swamy died age 84 on Monday at the Holy Family Hospital in a Mumbai suburb after suffering cardiac arrest, his doctor told the Bombay High Court later that day. The court was hearing an urgent plea for bail on medical grounds, which Swamy was earlier denied in March.
Swamy was living with Parkinson’s Disease and had recently contracted Covid-19 in prison. At a hearing for his bail application in May, the court noted Swamy had a “severe hearing problem” and was “physically very weak.”
For decades, he fought for the human rights of India’s marginalized and indigenous groups, speaking and writing in depth about caste-based injustices.
India’s caste system was officially abolished in 1950, but the 2,000-year-old social hierarchy imposed on people by birth still exists in many aspects of life. The caste system categorizes Hindus at birth, defining their place in society, what jobs they can do and who they can marry.
Read More
In October last year, Swamy was arrested and charged under the country’s anti-terrorism laws, which critics have described as draconian.
Swamy, along with 15 other activists and academics, was accused by authorities of being involved with a “banned terrorist organization” and for being co-conspirators in a 2018 violent incident, according to a statement by the country’s anti-terrorism task force soon after his arrest.
In the incident, known as the Bhima Koregaon case, bloody clashes broke out between lower-caste and other regional groups in the state of Maharashtra.
Hundreds of thousands of Dalits — who are ranked the lowest in India’s caste-based system — had gathered in the village of Bhima Koregaon to mark the 200th anniversary of a battle in which they, as part of the then-British colonial army, defeated an upper-caste ruler, when the violence broke out.
Authorities accused Swamy of having ties with the organization responsible for the violence, and allege that he had links to Maoist rebels, who are considered one of the country’s biggest security threats. In a video recorded days before his arrest, Swamy denied all involvement and said he had never visited the location where the violence took place.
His arrest sparked outrage worldwide, prompting several opposition politicians, national and international rights groups to demand his release. 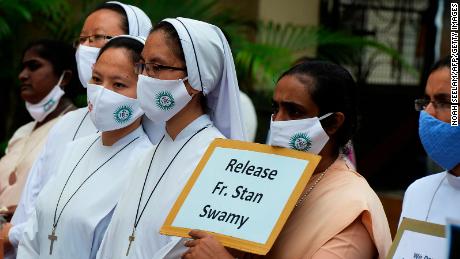 ‘Prefer to die in jail’

Despite Swamy’s worsening health, which was exacerbated when he contracted coronavirus in prison last month, authorities repeatedly rejected his lawyers’ pre-trial bail pleas to allow him to recover at home.
The National Investigation Agency in-charge of the case had contested Swamy’s bail application on medical grounds, citing the severity of the accusations against him, and claimed he was receiving proper care within the prison.
Swamy was allegedly not allowed to drink from a straw as his mobility worsened in custody — a claim the anti-terrorism force has denied, calling it “incorrect and mischievous” in a statement last year.
The activist told the court he would “prefer to die in jail, rather than get admitted to any hospital,” according to court documents reviewed by CNN.
On court orders, Swamy was moved to the Holy Family Hospital at the end of May.
India’s Ministry of External Affairs said in a statement Tuesday that Swarmy was arrested and detained “following due process of the law.”
In light of Swarmy’s ailing health, he was allowed medical treatment at a private hospital, where since May 28 he had received “all possible medical attention,” the ministry said.
A slew of opposition politicians, rights groups and academics, have expressed sadness for his death — as well as anger for the laws under which he was arrested and denied bail. Critics have long accused India’s government of increasingly using anti-terrorism laws as a means to quell any form of dissent.
In a statement Monday, the Archbishop of Bombay, Oswald Cardinal Gracias, called Swamy’s arrest “very painful.”
“One is innocent until proved guilty,” the statement said. “Fr. Stan’s case did not even come up for hearing.”
Gracias added Swamy had given marginalized groups in India a “sense of dignity and upliftment,” adding that he worked “single-mindedly for the poor.”
Rahul Gandhi, leader of India’s opposition Congress party, tweeted Monday that Swamy “deserved justice and humanness.”
Harsh Mander, a prominent Indian rights activist called Swamy’s death a “tragedy for the nation.”
“A cruel state jailed him to silence his voice, the judiciary did nothing to secure his freedom,” he said on Twitter.
International figures have spoken out as well — the European Union’s special representative for human rights said the EU had been “raising his case repeatedly with authorities,” calling Swamy a “defender of indigenous people’s rights.”
Meenakshi Ganguly, South Asia director of Human Rights Watch, said Swamy’s arrest highlights “a degree of cruelty and callousness that is shameful.”
“The counter terror law is draconian. We see it is being used rampantly to jail peaceful critics without bail,” Ganguly said. “It was for the courts to decide if Swamy was guilty, but in repeatedly stifling bail, the authorities chose not to protect,” the “fragile, ailing” activist, she added.

The death in India of an octogenarian human rights activist who was denied bail even as his health deteriorated in prison has sparked anger across the country, with critics decrying the government’s alleged misuse of anti-terrorism laws.