Demonstrators complained about a lack of freedom and the worsening economic situation during the rare protests, according to people who spoke to CNN and videos from multiple cities, including capital Havana.
Many chanted for “freedom” and called for President Miguel Diaz-Canel to step down.
Multiple protesters were arrested by police, who used tear gas to break up some demonstrations. In Havana, a CNN team witnessed demonstrators being forcibly arrested and thrown into the back of vans by police officers. There were also violent clashes, where protesters turned over a police car and threw rocks at officers.
In a nationally televised address, President Diaz-Canel said US trade sanctions had created economic misery on the communist-run island.
Read More
Diaz-Canel did not offer the protesters any concessions in his speech, but instead urged his supporters to physically confront them. “The order to combat has been given,” he said at the end of his appearance, “Revolutionaries need to be on the streets.”
In the city of San Antonio de los Banos, just outside Havana province, hundreds of people defied a heavy police presence to air their complaints. 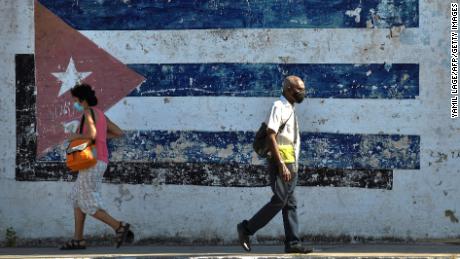 Cubans are risking everything to enter the US
One resident who did not wish to be identified told CNN that residents had been enduring power outages for a week and that had “detonated” the growing outrage.
Social media platforms are being restricted in Cuba, according to internet monitor NetBlocks.
NetBlocks tweeted on Monday that “Social media and messaging platforms restricted in #Cuba from Monday on state-run internet provider ETECSA; real-time network data corroborate reports of internet disruptions amid widening anti-government protests; incident ongoing #CubaSOS.”
The NetBlocks website said its metrics showed that WhatsApp, Facebook, Instagram and some Telegram servers were being disrupted.
Videos uploaded to social media showed how the spontaneous protest movement has gained momentum, with streams appearing of other protests in a handful of cities and towns across the island.
In some of the videos, people shouted they “weren’t afraid” or that they wanted liberty or access to coronavirus vaccines.
President Diaz-Canel made an unplanned stop in San Antonio de los Banos on Sunday after police had cleared protesters, while Cuban government officials blamed the protests on “salaried agents” on Twitter.
On Monday, US President Joe Biden expressed support for the Cuban people, calling on the Diaz-Canel government to “hear their people and serve their needs.”
“We stand with the Cuban people and their clarion call for freedom and relief from the tragic grip of the pandemic and from the decades of repression and economic suffering to which they have been subjected by Cuba’s authoritarian regime,” Biden said in a statement.
President Diaz-Canel criticized the protests, calling demonstrators vandals who “broke into the stores and stole [many] items.” He reiterated that US sanctions were the cause of Cuba’s ailing economy.
US-Cuban relations are at their lowest point in years. The Trump administration enacted some of the toughest economic measures against Cuba in decades, and so far, the Biden administration seems reluctant to lift them.
The already struggling Cuban economy has been hit hard as tourism and good imports have dropped steeply during the pandemic.
On Sunday, Cuban health officials reported a record single-day increase for new Covid-19 cases and deaths.

White House National Security Advisor Jake Sullivan tweeted support for the Cuban people Sunday night saying, “the U.S. supports freedom of expression and assembly across Cuba, and would strongly condemn any violence or targeting of peaceful protesters who are exercising their universal rights.”
Other US officials also urged for restraint, saying Cubans had the right to protest. “We are deeply concerned by “calls to combat” in #Cuba. We stand by the Cuban people’s right for peaceful assembly. We call for calm and condemn any violence,” Julie Chung, acting assistant secretary for the Department of State’s Bureau of Western Hemisphere Affairs, tweeted Sunday. 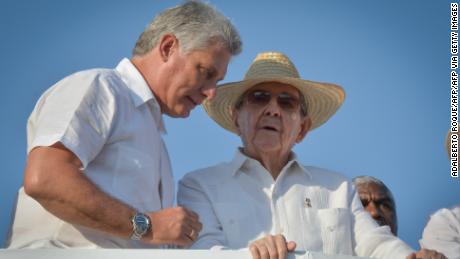 Meet the new leader of Cuba’s Communist Party
“For decades, Cuba’s dictatorship has used violence and repression to silence its people, rather than permit the free exercise of democracy and their basic social rights,” Senate Foreign Relations Committee Chairman Bob Menendez said in a statement.
“This must end. The world’s eyes are on Cuba tonight and the dictatorship must understand we will not tolerate the use of brute force to silence the aspirations of the Cuban people,” he added.
Cuba’s Minister of Foreign Affairs Bruno Rodriguez criticized Sullivan’s statement on Monday, saying he had “no political or mortal authority to speak about Cuba.”
“His government has allocated hundreds of millions of dollars to promote subversion in our country & implements a genocidal blockade, which is the main cause of economic scarcities,” Rodriguez added in a tweet.

Thousands of Cubans took to the streets on Sunday to protest a lack of food and medicine as the country undergoes a grave economic crisis aggravated by the Covid-19 pandemic and US sanctions.