The likely missile field, comprising 120 silos that could potentially house weapons capable of reaching the United States mainland, was documented by researchers at the James Martin Center for Nonproliferation Studies using satellite imagery supplied by commercial satellite company Planet Labs Inc.
The researchers compared satellite photos taken during the past four months with images captured within the past week, finding the missile site covering a grid of hundreds of square kilometers in China’s Gansu province, said researcher Jeffrey Lewis, a Chinese nuclear weapons expert who examined the images with colleague Decker Eveleth, the first person to spot the silos.
The pair’s findings were first reported in the Washington Post.
Lewis told CNN on Friday that most of the silo construction, which has yet to be completed, has likely occurred in the past six months.
Read More
“It’s really a startling pace of construction,” he said, adding that the scope of the buildup was also surprising.
“It’s a lot of silos,” Lewis said. “It’s much larger than anything we expected to see.”
Reports of the likely new missile field came just a day before Chinese leader Xi Jinping said in a nationalistic speech on the Communist Party’s 100th anniversary that China’s rise is a “historical inevitability” and it will no longer be “bullied, oppressed or subjugated” by foreign countries.
“Anyone who dares to try, will find their heads bashed bloody against a great wall of steel forged by over 1.4 billion Chinese people,” Xi added, in comments that later appeared to be softened in the government’s own English language translation. 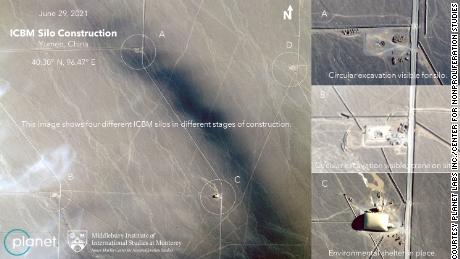 Though researchers have identified 120 likely silos, there is no indication they are in use, or will be used into the future. However, analysts said the silos, placed in a grid pattern, at 3-kilometer (1.9-mile) intervals, could be used to house Chinese-made DF-41 intercontinental ballistic missiles.
The DF-41, also known as the CSS-X-20, is estimated to have a range of 12,000 to 15,000 kilometers (7,400 to 9,300 miles) and could be equipped with up to 10 independently targeted nuclear warheads, according to the Missile Threat Project at the Center for Strategic and International Studies.
“It is projected to be able to strike the continental United States within 30 minutes,” the project’s website says.
China first showed off the DF-41 on mobile launchers in 2019, but its actual deployment has not been confirmed.
“The relative merits of mobile versus silo-based ICBMs after the end of the Cold War have been frequently debated; simplistically mobile systems are easier to hide and disperse, but more vulnerable if found, while silos are increasingly difficult to conceal, but harder to disable or destroy,” said Henry Boyd, a research fellow at the International Institute for Strategic Studies in London.
“If the PLA (China’s People Liberation Army) has decided to invest in a large number of new silos for its ICBM force, this might suggest a shift in Beijing’s thinking on the matter,” Boyd said.
Timothy Heath, senior international defense researcher at the RAND Corporation, a US-based nonprofit think tank, said the development shows Beijing is serious about increasing its nuclear deterrence — the idea that it could withstand a nuclear first strike from an adversary and still have nuclear weapons left that could inflict unacceptable losses on the opponent.
“Prior to this development, the US military could possibly consider using nuclear weapons in a war near China to destroy large numbers of PLA troops and equipment,” said Heath. “The construction of 120 or more silos makes such a preemptive strike much harder as the US would have to target all of the silos as well as mobile launchers now.”
“In short, China is trying to raise the risk of nuclear weapons use in a contingency near China to an intolerably high level,” he said.
China does not typically comment on sensitive military matters, however, an editorial published in the state-owned Global Times on Friday acknowledged Western reports relating to the silo construction, while noting that it would not be in China’s strategic interests to remark on their validity.
The editorial, titled “China’s nuclear deterrence buildup cannot be tied down by the US,” also advocated for China to increase its nuclear deterrence in light of what it termed “US military pressure on China,” pointing out that the US has “at least 450 silos.”
“Once a military confrontation between China and the US over the Taiwan question breaks out, if China has enough nuclear capacity to deter the US, that will serve as the foundation of China’s national will,” read the editorial.
In January, Chinese Foreign Ministry Spokesperson Hua Chunying reiterated China’s commitment not to use nuclear weapons unless first attacked “at any time or under any circumstances,” while pledging “not to use, or threaten to use nuclear weapons against non-nuclear weapon states.”
Speaking in response to a question on China’s position regarding the United Nation’s Treaty on the Prohibition of Nuclear Weapons, which Beijing does not recognize, Hua maintained that China’s nuclear forces are always kept at what she described as the minimum level required to safeguard national security. “This is the Chinese government’s consistent basic policy,” said Hua.
“At the same time, it is China’s view that nuclear disarmament cannot lose sight of the reality of the international security landscape. Progress should be sought step by step under the principle of maintaining global strategic stability and undiminished security for all,” added Hua. 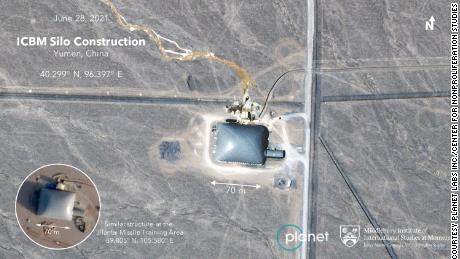 US officials said the satellite images reaffirm evaluations made last year in the Defense Department’s China Military Power Report and repeated often since.
“Numerous Defense Department leaders have testified and publicly spoken about China’s growing nuclear capabilities, which we expect to double or more over the next decade,” Pentagon spokesman John Supple said.
US State Department spokesperson Ned Price described the apparent buildup as concerning, noting that it raised questions over China’s intentions. “For us it reinforces the importance of pursuing practical measures to reduce nuclear risks, despite what appears to be PRC obfuscation,” said Price, referring to China by its formal acronym, the People’s Republic of China.
“This rapid buildup has become more difficult to hide, and it highlights how the PRC appears again to be deviating from decades of nuclear strategy based around minimum deterrence,” he said during a State Department briefing Thursday. 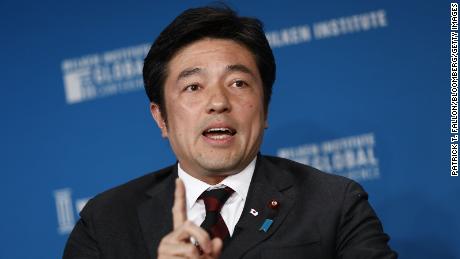 Japan’s deputy defense minister says Taiwan must be protected ‘as a democratic country’
Analysts note that China is only believed to have a total of about 350 nuclear weapons, a fraction of the 5,550 warheads in the US nuclear arsenal. China’s nuclear weapons are spaced out among mobile land launchers, a small fleet of ballistic missile submarines and its nuclear-capable bombers.
So it’s unlikely all of the 120 purported new silos would get an ICBM tipped with a nuclear warhead.
Rather, China could play a “shell game” with the missiles, the analysts said, moving active missiles among the silos randomly.
Lewis, the Chinese nuclear weapons expert, said because the silos are 3 kilometers apart, each would have to be targeted with an adversary’s weapon to assure destruction of the missile within it. But missile doctrine says each silo would have to be targeted twice to assure its destruction, he said.
Heath, from the RAND Corporation, said the new missile field, which increases China’s ability to withstand a nuclear strike and retaliate, could have implications for US allies and partners in Asia, who have been able to find cover under the US nuclear umbrella.
“The possibility of escalation becomes much more dangerous now,” he said.
“This raises additional questions about the willingness and ability of the US to maintain its security commitments to allies and partners in Asia. The US will have to build anti-missile defenses or develop other ways of mitigating this danger if it wants to maintain the credibility of its alliance commitments in Asia,” Heath said.

China is building a sprawling network of what appear to be intercontinental ballistic missile silos in its western desert that analysts say could change the equation for US military planners in Asia.