The crane was attached to a high rise under construction in Kelowna, British Columbia, when it toppled Monday morning, hitting an adjacent professional building and the roof of an “old age home,” according to Royal Canadian Mounted Police Inspector Adam MacIntosh.
No further information on injuries or the number of fatalities was released. MacIntosh said the site of the collapse and the surrounding area was unsafe and unstable.
The incident prompted the evacuation of surrounding streets as well as a local emergency declaration. Crews are investigating the cause of the collapse.
Harry Bains, the minister of labor in British Columbia, said he’s “deeply saddened” by the collapse.
Read More
“My thoughts are with the workers affected, and I send my sincere condolences to the families, friends and co-workers of the victims,” Bains said in a statement Monday. 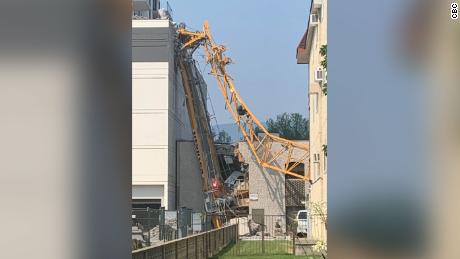 “All workers have the right to a safe and healthy workplace — even one injury or death is too many. This is a heartbreaking reminder that we must strive to ensure the safety of all workers to prevent incidents like this from happening,” he added.
Bains said the accident is being investigated by WorkSafeBC, the BC Coroners Service and the RCMP.
MacIntosh said 911 calls regarding the collapse started coming into authorities just after 11 a.m.
Several workers were on or near the site when the collapse occurred, he said.
Kelowna sits along Okanagan Lake, about 240 miles west of Vancouver and about 90 miles north of Canada’s border with the US.
The crane collapse in Kelowna happened just days after a portion of another crane collapsed on top of a building in Toronto Saturday, causing damage to its rooftop but no injuries. 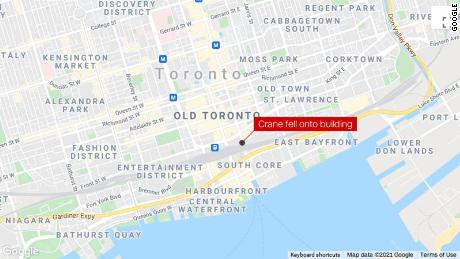 A crane fell on top of a building in downtown Toronto, causing damage
The counterweight, part of the crane meant to prevent it from tipping, was located on top of the 8 The Esplanade residential building after it fell approximately 20 feet, Toronto Fire District Chief Stephan Powell told CNN.
The top six floors of the condominium are mechanical rooms used for building maintenance, so no residential units were damaged, according to Powell.
The crane was carrying about 20,000 pounds of counterweight, which shifted, resulting in the crane tipping over, Toronto Fire platoon chief Kevin Shaw told CNN newsgathering partner CTV News.
“This crane collapse [caused] a bit of structural damage on the roof area, but no danger to any of the floors below, tenants or anything and didn’t get into any the apartment unit,” Shaw told CTV.
CNN has reached out to Del Property Management, which owns 8 The Esplanade, for comment.