Officials said at least 20 fires were started Tuesday by the balloons. Palestinian media reported the retaliatory Israeli strikes caused material damages, with no casualties reported.
More balloons were launched Wednesday, starting at least four more fires, Israeli fire and rescue authorities said.
While militants have been sending balloons into Israel for years, the Israeli military’s response of airstrikes in Gaza is a new escalation. Israeli officials said it was part of a message to Hamas that any provocation will be met with force. 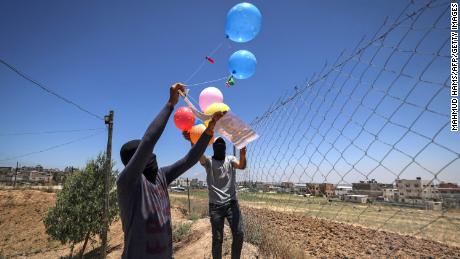 Read More
Former finance minister Israel Katz, who was in the cabinet during the most recent conflict with Gaza last month, said that after that operation, “we decided to change the rules.”
“For every attack in Israel, targeted assassinations and widespread attacks on Hamas targets will be carried out,” he tweeted.
Here’s what we know about the balloons and how they play into the current tensions.

What are incendiary balloons?

They’re relatively simple contraptions — helium balloons that often look like children’s birthday party decorations, attached to explosives or devices that are pre-emptively lit on fire.
Militants launch the balloons from Gaza and winds from the Mediterranean Sea help propel them into Israeli territory.

What are they designed to do?

The balloons are designed to frighten, cause damage, and start fires. Much of the land immediately surrounding Gaza are fields, nature reserves or farmland. Other than explosives attached to the devices potentially landing in residential areas and causing injuries or damage, the fires from the balloons burn crops and nature reserves.
According to the Israeli Parks and Nature Reserve Authority, such fires have burned more than 3,657 acres of the area surrounding Gaza from 2018 until May 25, 2021. Israeli authorities say the fires have destroyed thousands of acres of crops.
Since 2018, more than 10,400 acres have been burned in Israel from flying incendiary devices, not including Tuesday’s fires, an Israel Defense Forces spokesperson said.
So far authorities have not reported any casualties from such incendiary devices. 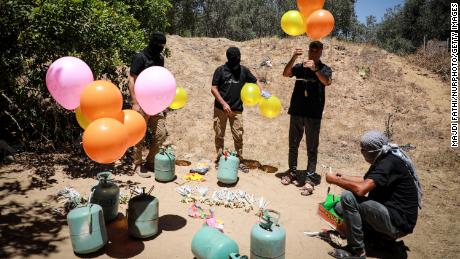 Why balloons instead of rockets this time?

The balloons are a cheap way for militant groups in Gaza to send a message to Israel, without provoking the full Israeli military retaliation that often occurs when rockets are fired from the coastal enclave.
The balloons are easily constructed and require little set up to launch, compared to rockets which are expensive and time-consuming to produce. So far, the balloons rarely if ever cause injuries.
Tuesday’s balloons were likely floated in response to the Israeli government’s decision to allow a provocative right-wing flag march to proceed in Jerusalem.
The flag march is an annual parade where mostly nationalist Jewish groups walk through the Old City of Jerusalem carrying Israeli flags to celebrate Israel gaining control of the Western Wall during the 1967 Six-Day War. The march often sparks tensions with Palestinian residents of the Old City.
On Tuesday, 33 Palestinian protesters were injured, including by stun grenade, rubber bullets and live fire — with six evacuated to hospital — following clashes with Israeli security forces around east Jerusalem, the Palestinian Red Crescent Society said.
In a statement on Tuesday, Hamas claimed victory, saying their tactics and Palestinian demonstrators in Jerusalem had forced Israeli officials to change the path of the flag parade and take other precautionary measures.

Where does Israel’s new leader stand on balloons?

In the past, Prime Minister Naftali Bennett had pushed former Prime Minister Benjamin Netanyahu to take a tougher stance against Hamas and the launching of incendiary balloons, saying the Israeli military should respond to them in the same way as it responds to rockets directed at Israeli communities.
After last month’s 11-day conflict, Israeli officials indicated such acts like incendiary balloons would be met with greater force, something that appears to now be happening.
In 2018 while serving as education minister, Bennett said the military should “shoot to kill” anyone who sends such incendiary devices over the border fence.

The Israeli military launched airstrikes against Hamas targets in Gaza overnight after militants floated dozens of so-called “incendiary balloons” over the border fence into Israel.