The company started a limited test on Tuesday that lets customers order two custom beverages through Facebook or Instagram. Customers who see the images on the social media platforms can swipe to access a special Starbucks web-page, where they can place the order. Insider previously reported on the test.
On the menu are two drinks: an Iced Matcha Latte with Chai, and the Pink Drink Remixed. The matcha-chai combination was popularized on TikTok earlier this year.
“I recently discovered the best drink in the world,” TikToker Robin Swann, who has over 195,000 followers, said in a video. “Iced Matcha Latte with two pumps of chai, tastes like drinking the moon herself.” Later, singer Lizzo posted a video of herself sipping the drink, whispering “Try it.” Many people followed her advice.
The Pink Drink Remixed isn’t a social media special. Instead, it’s a take on Starbucks’ Pink Drink, a Strawberry Acai beverage with a coconut milk base. The Pink Drink was popularized by customers who subbed coconut milk in for water in the Straberry Acai in 2016. It was added to the menu in 2017. The remixed version is topped with a vanilla sweet cream cold foam. 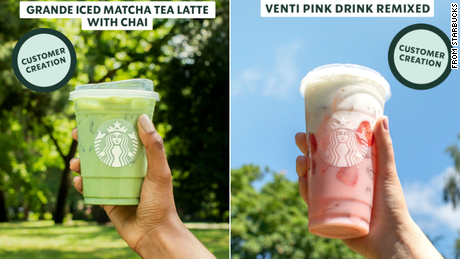 Read More
Customized drinks contributed to an uptick in spending-per-order in the first three months of the year, CEO Kevin Johnson said during an April earnings call. For Starbucks (SBUX), the test is a way to try to streamline the ordering process for customers and employees when a specific customized drink takes off. They can just click to order, rather than specify all the customizations needed to make the drinks.
“We know that there is this rise in customized beverages,” Starbucks spokesperson Sanja Gould told CNN Business. “Anything that we can do to help the [employee] and customer experience, we definitely want to do.”
Gould declined to share details on the scope of the test or the length of time the drinks will be available.
Starbucks is not the only chain to embrace celebrity or influencer concoctions.
Last year, Dunkin’ launched “The Charli,” which consists of cold brew with whole milk and three pumps of caramel swirl and was billed as TikTok star Charli D’Amelio’s go-to Dunkin’ drink. McDonald’s (MCD) has also found success with meals advertised as the preferred orders of musicians like Travis Scott, J Balvin and BTS.

Starbucks knows that certain off-menu drinks dreamed up by its customers have become popular. So it’s trying out a way to let people order them more easily.