The EPA, which has jurisdiction over the US Virgin Islands, issued the shutdown order in May after a series of incidents in which oil was released into the environment and sent sulfur dioxide and hydrogen sulfide into the air, both of which cause respiratory illness. Residents have described foul smells in their neighborhoods and oil raining down from the sky, contaminating water supplies. EPA officials say they have received hundreds of calls and emails complaining about the plant since February.
Limetree Bay has been working to obtain capital to assist in its restart efforts, the company said in a press release Monday. But it has been “unable to secure the necessary funding” and is cutting the refinery’s workforce by approximately 271 employees, effective September 19. “The Company met with employees today to announce the decision to suspend the restart and explain the transition process for those who will be affected by it,” the company said. 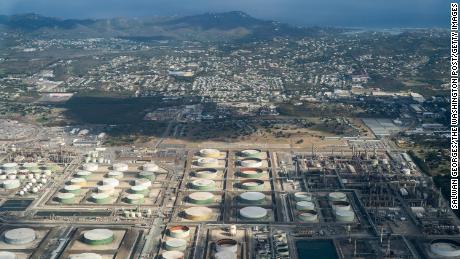 A Caribbean island bet its future on petrochemicals. Then oil rained down on homes.
The refinery’s CEO Jeff Rinker said shutting down indefinitely “was an extremely difficult decision” but “this is our only option, given the extreme financial constraints facing the company.”
Under previous owners, the plant filed for bankruptcy and closed. It reopened earlier this year, backed by private equity firms, under a permit issued by the Trump administration.
Read More
The refinery was a big boost for the economy in St. Croix during the pandemic, providing revenue and jobs for people on the island. But some of the island’s residents are questioning whether it’s doing more harm than good, particularly for a community on the front lines of the climate change crisis in the form of sea level rise and increasingly powerful storms.
In preparation for the extended shutdown, the refinery said it will start “safely purging gases from all of the units and removing any residual oil and products in the lines.”
Dyline Thomas, a 58-year-old resident on the island, said she discovered oil in her yard in mid-May. And just two days earlier, a flare incident occurred at the Limetree Bay refinery upwind of her home. As flames and smoke billowed out of the flare stack, oil droplets were launched into the sky and carried by the wind, raining down on nearby homes.

The Limetree Bay oil refinery in St. Croix said it would close indefinitely, citing “severe financial constraints” a month after the Environmental Protection Agency ordered an emergency shutdown of the plant, calling it an “imminent and substantial endangerment” to public health on the island.