“This period of special leave will enable the Minister to attend to allegations and investigations concerning contracts between the Department of Health and a service provider, Digital Vibes,” Ramaphosa said in a statement.
“The Special Investigating Unit is investigating this matter and the President awaits a report on the outcome of this probe,” the statement continued, adding that Tourism Minister Mmamoloko Kubayi-Ngubane will take over the health portfolio in the interim.
The scandal around the Digital Vibes contract has been dominating headlines in the country for weeks and sparked calls for Mkhize to resign. 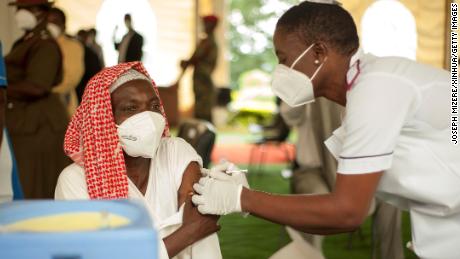 African countries have struggled to secure enough Covid-19 vaccines. So why are thousands of doses going to waste?
Ahead of Ramaphosa’s announcement, Mkhize made a statement to the press saying “I fully acknowledge and take personal responsibility for the public outrage that has been caused by this Digital Vibes contract.”
Read More
“The negative discourse has not only affected and had an impact on me, but it also had impact on my family. But most of all it has tainted the teamwork of our government that is led by the president in the continued efforts to fight the Covid-19 situation. It’s also caused a bit of disruption, and for all of this I want to unreservedly apologize.” Mkhize said.
Mkhize said an internal report announced on May 26 had found “irregularities in the contract and overcharging or fruitless expenditure in that contract” but insisted that he personally “had no role to play in the award of the contract and there was no personal benefit.”
Asked if he and the president had discussed his possible resignation, Mkhize said “we have not discussed the issue of resignation we’ve discussed the issue special leave pending the report of the SIU.”

US and China deploy aircraft carriers in South China Sea as...

China may just have doomed its trade deal with Europe

Shiffrin doesn’t want to have to choose between ‘morality versus being...

One dead, 3 injured in a Toronto shooting

Is it finally the end for Netanyahu, the great survivor of...