Devonte Brown, 18, of Southwark, was charged Friday with conspiracy to murder Johnson and was expected to appear at the Westminster Magistrates’ Court on Saturday, the statement said. 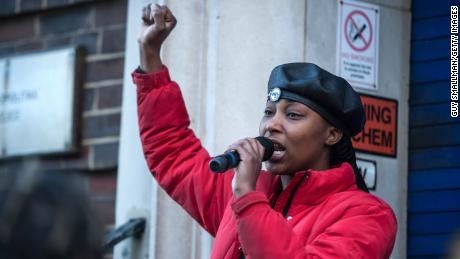 Man charged with conspiracy to murder over shooting of British BLM activist Sasha Johnson
Johnson — a 27-year-old mother and a vocal campaigner for equal rights — was shot in the head during the early hours of May 23 in south London, though police said they do not believe she was specifically targeted.
Johnson, who rose to prominence during Black Lives Matter protests last year and leads the Taking the Initiative Party (TTIP), “remains in a critical condition in hospital,” police said.
According to an earlier police statement, Johnson was shot during a house party around 3 a.m., when four men “entered the garden of the property and discharged a firearm.”
Read More
Cameron Deriggs, also 18, was previously charged late last month with conspiracy to murder. At the time police said he was one of five men arrested in connection to the case. The four others were released on bail.
Deriggs and Brown both remain in custody, police said.

CNN’s Samantha Beech and Niam Kennedy contributed to this report.

A second man has been charged in the shooting last month of Black Lives Matter activist Sasha Johnson, the London Metropolitan Police said in a statement Saturday.