Tuesday’s flights — which included fighter jets, bombers, and anti-submarine and early warning aircraft — surpassed the previous peak of 25 planes reported April 12.
Beijing claims full sovereignty over Taiwan, a democracy of almost 24 million people located off the southeastern coast of mainland China, even though the two sides have been governed separately for more than seven decades.
While there was no immediate comment from Beijing on Tuesday’s flights, the news comes after the Group of Seven (G7) leaders issued a joint statement on Sunday scolding China for a series of issues and underscored the importance of peace and stability across the Taiwan Strait — comments China condemned as “slander.”
But analysts said Tuesday’s flights likely served several purposes for China, both demonstrating the strength of the country’s People’s Liberation Army to a domestic audience, while giving the PLA intelligence and skills it would need in any potential conflict involving Taiwan.
Read More
It also follows the June 6 landing of a US Air Force C-17 transport jet in Taipei, an event likely perceived to to be in “humiliating defiance” of Beijing’s claim of sovereignty over Taiwan, according to Timothy Heath, a senior defense researcher at the RAND Corp think tank.
The landing of any foreign military aircraft on another nation’s soil is strictly regulated by international norms and requires specific authorization. 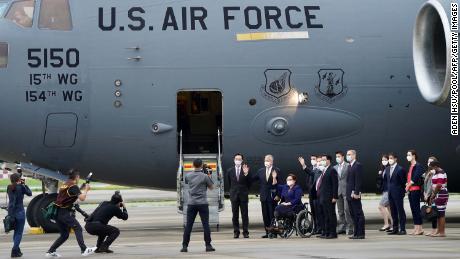 US senators took a military aircraft to Taiwan to announce vaccine donation. To Beijing, that is a major provocation
The C-17, which was carrying a US Senate delegation to Taiwan as part a planned announcement regarding the donation of 750,000 doses of Covid-19 vaccine, had none of those from Beijing.
The 28 flights into Taiwan’s ADIZ on Tuesday “showed Chinese domestic audiences that China would respond militarily to a US-Taiwan incident that Chinese authorities and media have denounced as extremely provocative,” Heath said.
“The incursions also signaled to Taiwan and the US that China regarded the military cooperation as a threat,” Heath said.
Drew Thompson, a former US Defense Department official now at the Lee Kuan Yew School of Public Policy in Singapore, said it was highly unlikely China put together the complex 28-plane incursion in just 48 hours after the G7 statement that rankled Beijing.
“Can you get a presidential-level decision in China that quickly for something as complex as that? I doubt it,” Thompson said.
“I think we can probably conclude that this was a series of planned exercises that probably the timelines were tweaked so that more aircraft could be added on short notice,” he said.
Taiwan has complained in recent months of repeated missions by China’s air force near the island, concentrated in the southwestern part of its air defense zone near the Taiwan-controlled Pratas Islands.
Thompson noted that Tuesday’s flights included intelligence gathering early-warning aircraft. Those planes can measure Taiwan’s response and that information could be used in the event of possible combat missions in the future.
He said the PLA’s flights Tuesday adhered to international law as they did not violate Taiwanese airspace, which extends 12 nautical miles from its coast, but rather only went into its ADIZ, an area any nation can set as it pleases. 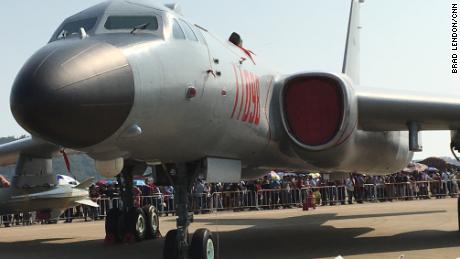 The US Federal Aviation Administration defines an ADIZ as “a designated area of airspace over land or water within which a country requires the immediate and positive identification, location and air traffic control of aircraft in the interest of the country’s national security.”
The latest Chinese mission involved 14 J-16 and six J-11 fighters, as well as four H-6 bombers, which can carry nuclear weapons, and the anti-submarine, electronic warfare and early warning aircraft, Taiwan’s Defense Ministry said.
The ministry added that Taiwanese combat aircraft were dispatched to intercept and warn away the Chinese aircraft, while missile systems were also deployed to monitor them.
Not only did the Chinese aircraft fly in an area close to the Pratas Islands, but the bombers and some of the fighters flew around the southern part of Taiwan close to the bottom tip of the island, according to a map the ministry provided.
Meia Nouwens, senior fellow for Chinese defense policy at the International Institute for Strategic Studies, said Tuesday’s flights were different from previous incursions into Taiwan’s ADIZ by the Chinese military.
“The PLA seemed to have done something new with the configuration of aircraft and different flight routes. So I would put this down to testing new skills once again, with (perhaps) some useful timing for political signaling,” she said.
China’s Defense Ministry did not respond to a request for comment.
China has in the past described such missions as necessary to protect the country’s sovereignty and deal with “collusion” between Taipei and Washington, which have no formal diplomatic ties.
China describes Taiwan as its most sensitive territorial issue and a red line the United States should not cross. It has never renounced the possible use of force to ensure eventual unification.
And China likes to keep its adversaries guessing, said Thompson, the former US Defense Department official.
“Because of all this ambiguity about signaling, timing, packages, location, it makes for a very, very effective gray-zone tool,” Thompson said.
“It says one thing to Japan, another thing to the US, another thing to Taiwan.
“It sends a whole bunch of different messages to different people. But the common theme is, ‘don’t oppose China,'” or face serious consequences, he said.