Hundreds of graves dating from the fifth century to the seventh century AD in an area stretching from Transylvania to England were opened as part of regular mortuary customs in order to remove artifacts, move bodies around and even add a dog to the burial, according to new research published in the journal Antiquity.
In 10 to 15 graves, the feet were removed from the dead or their skulls twisted around, which showed the living were worried about the dead walking again, lead author Alison Klevnas, an archaeologist and researcher at Stockholm University, told CNN.
In one case, a dog was added to the grave, which Klevnas said is a “very unusual example” that demonstrated people wanted to please the dead individual.
“What we have is another dimension to the burial practices of this period,” she said.
Read More 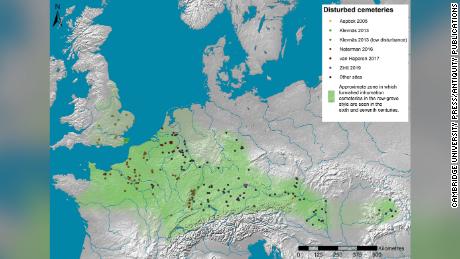 Most of what we know about the early medieval period has come from studying these cemeteries, Klevnas added.
“Usually they (grave openers) treat the graves and the bodies within them with complete carelessness,” she said, but the practice has revealed that the dead and their grave goods remained important even after they were buried.
Time spans of when a grave was reopened could range anywhere between a few months to several decades after the person was buried, Klevnas said. Occasionally, graves were reopened more than once.
While robbing graves is thought of as a negative act, Klevnas said that reopening burial sites was “socially positive.”
Grave robbers likely weren’t responsible because objects removed from the graves weren’t selected based on their value, the researchers concluded.
Brooches and swords might be taken, while very valuable items such as necklace pendants of gold or silver might be left behind, experts said.
The research is the result of a joint effort between Klevnas and four other archaeologists, who combined their data to give a better idea of the huge scale of grave reopening over a wide geographical area, detailing more than a thousand reopened graves in dozens of cemeteries. 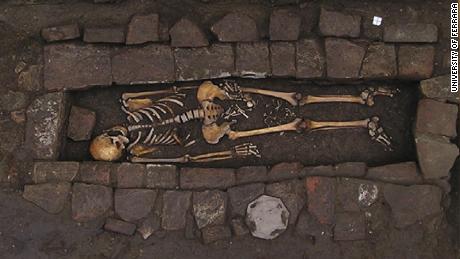 Medieval grave reveals rare ‘coffin birth’ and neurosurgery
“The reopening custom spread over western Europe from the later 6th century and reached a peak in the 7th century,” Astrid Noterman, an archaeologist and postdoctoral researcher at Stockholm University who studied 40 affected sites in northern France, said in a news release.
“In most areas, it peters out in the later 7th century, so that many cemeteries have a last phase of burials with no reopening.”
Klevnas told CNN that she now wants to examine why people buried objects with the dead, and the meanings of different types of grave goods.

Early Medieval graves in Europe were reopened as part of widespread burial traditions — not only by grave robbers, as experts previously thought.