Having started on pole position, the 23-year-old Dutch driver finished over 35 seconds ahead of reigning world champion Lewis Hamilton on Sunday.
It is the fourth win of the season for Verstappen, extending his lead at the top of the standings to 18 points ahead of Hamilton.
It is also the fourth race in a row without a win for the previously all-conquering Mercedes and could signal a changing of the guard with Austria’s Red Bull Ring hosting next weekend’s race as well.
“You never know how it is going to end up but straight away I felt a good balance in the car,” Verstappen said afterward.
Read More
“It was good to manage the tires from the start. They pitted one lap earlier than us, we reacted to that and we just kept on going, trying to hit our lap times — that worked really well today.
“That’s really positive but we have to show it again next week. We’ll definitely have a look as to what we can do better. I’m looking forward to next week. It’s looking really good. We just have to keep pushing really hard and I’m confident we can do a really good job again.”
READ: King of the Baggers: A slice of pure American folklore goes racing 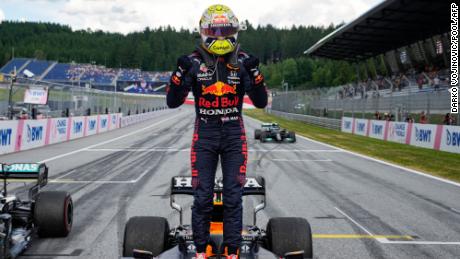 This F1 season has been jampacked full of thrilling races, comprised of high-speed overtakes and dramatic conclusions.
But coming off a dramatic win last weekend at the French Grand Prix, it was much more straightforward for Verstappen.
He qualified on pole position, posting the fastest lap in two of the three qualifying sessions.
And from lap one, he looked in control. He managed to maintain his lead through the first corner, and after two laps, was already 1.4 seconds clear of second-placed Hamilton. 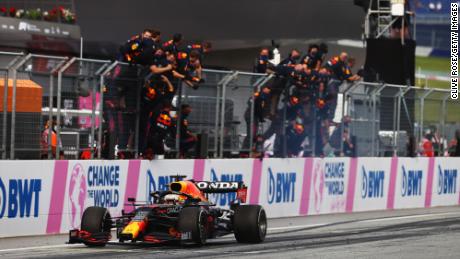 Verstappen calmly and decisively extended his lead over the 71 laps at the Red Bull Ring, showing skill and poise beyond his youthful years to claim his second win in seven days.
Hamilton, who could only settle for second place — finishing over 11 seconds ahead of Mercedes teammate Valtteri Bottas — was at least able to claim a point as he clocked the fastest lap of the race.
But despite Mercedes claiming second and third place on the podium ahead of Verstappen’s teammate Sergio Perez, the day was all about the flying Dutchman.
The thorough victory was the 14th of his burgeoning F1 career, and puts him in pole position for a maiden F1 world championship title.
Visit CNN.com/sport for more news, features, and videos 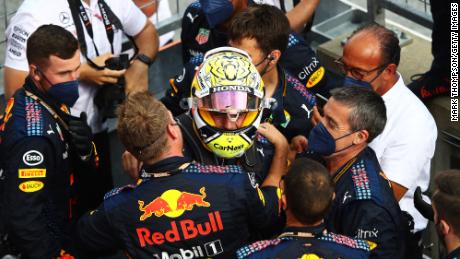 Afterward, seven-time F1 champion Hamilton — who is looking for his eighth title which will take him one clear of the record set by Ferrari great Michael Schumacher — admitted Mercedes are struggling to keep up with the quicker Red Bull.
“They’re faster, they’re just faster,” he told the media. “There’s not a lot I can do in that respect. I’ve just got to keep trying to do the best I can do each weekend.
“We need to find some performance, we need an upgrade of some sort, we need to push. I don’t know whether it’s just the rear wing or whether it’s the upgrade in the engine, but we’ve got to find some performance from somewhere.”

Red Bull’s Max Verstappen put in a dominant performance at the Styrian Grand Prix to extend his lead at the top of the Formula One drivers’ championship.