Macron’s La Republique En Marche won 10.9% of votes and the far-right National Rally, led by Le Pen, won 19.1% — lower than expected, according to exit polls. The right-wing party Les Republicains fared better and won 29.3% of the vote.
An unprecedentedly high rate — 68% — of the population didn’t vote. This is the highest abstention rate under the Fifth Republic.
A second round of regional elections will be held on June 27.
The regional elections are being closely watched for voter preferences ahead of next year’s Presidential election. However, given the low voter turnout, political experts say it’s hard to draw conclusions at this stage. 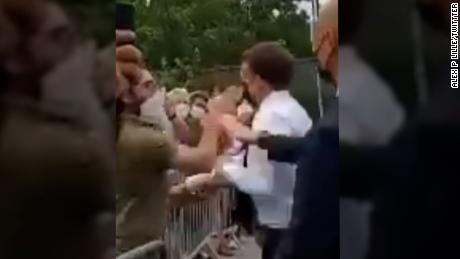 French President Emmanuel Macron slapped by member of public
Read More
On Monday, French Interior Minister Gerald Darmanin described the results as a form of failure, although he added it was too soon to draw conclusions for the 2022 presidential vote, Reuters reported.
“Democracy means sometimes losing elections. The presidential majority faced an important hurdle … let us not draw quick conclusions regarding the presidential elections,” he told France 2 television, Reuters reported.
Darmanin also said that Sunday’s record low turnout was “a defeat for all of us” as “abstention is a message. The French people are telling politicians they do not trust them.”
“No-one can be happy when there is a 70% abstention rate, rising to over 80% among young people,” he added.