Last week Tesla raised the price of the Model 3 by $2,000 to $39,990 for the base model, according to a comparison of its website on the Wayback Machine internet archive. Tesla also raised the price of the Model Y SUV by $5,000 to $51,990.
When a Tesla fan questioned the price increases on Twitter, Musk responded that the price increases were beyond its control.
“Prices increasing due to major supply chain price pressure industrywide,” he tweeted. “Raw materials especially.”
Prices of cars, both new and used, are at record levels across the industry — but that’s generally attributed to a combination of strong demand and a shortage of vehicles for sale because of plant shutdowns caused by a computer chip shortage.
Read More
Musk told investors in April that the shortage of computer chips was a “huge problem.” Tesla did not build any of its more expensive models, the Model S and Model X, during the first quarter as it directed the chips it had to the Model 3 and Model Y. It has yet to resume deliveries of either car, though it is promising once again that deliveries should resume soon for the Model S.
Computer chips are not the only raw material seeing shortages and price increases. Prices for lithium, a key material used in EV batteries, have more than doubled in trading markets. Cobalt, another key material for batteries, is also sharply higher though it has retreated from a high earlier this year.
What Tesla is paying for those raw materials under its supplier contracts is unknown. The same is true for metals used elsewhere in the car, such as steel, aluminum and copper, which have also seen in prices traded in public markets rising. Even tires are reported to be in short supply throughout the industry.
Tesla plans to increase production by more than 50% this year, and thus is increasing its demand for batteries by the same amount. And traditional automakers are also ramping up production of EVs and thus EV batteries. 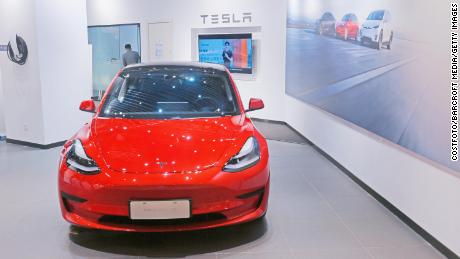 Tesla may be much worse off in China than anyone thought
Tesla is trying to control costs where it can. The company recently removed features in the Model 3 and Model Y, such as lumbar support for the front passenger seat. Musk said that Tesla data shows that the feature is not being used very often, and thus it was not worth the additional cost or weight.
Tesla has not yet raised the prices of its two most expensive cars, the Model S and Model X SUV.

Add Teslas to the list of items that are costing more money during the pandemic.