According to the organization, Steffan Latypov, who is facing allegations of organizing protests and resisting arrest, stabbed himself in the neck during the hearing because of alleged threats from authorities against his family if he didn’t plead guilty. The 41-year-old faces an additional charge for fraud which he also denies.
“Father, after meeting with you, GUBOPiK [Belarusian Interior Ministry’s Main Directorate for Combating Organized Crime and Corruption] came to me and warned that if I didn’t admit my guilt, then I would be thrown in a cell with hardened criminals and criminal cases would be launched against my relatives and neighbors,” Latypov said according to Viasna 96 before cutting himself. 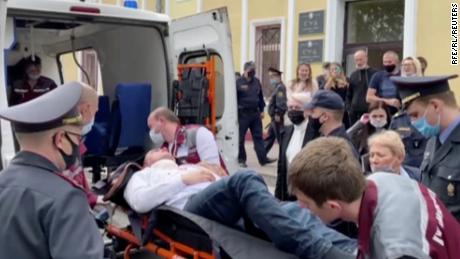 The Belarusian Interior Ministry could not be reached by CNN for a comment.
After being treated in hospital, Latypov was later moved to a detention center in Minsk, the activist’s parents told CNN on Wednesday.
Read More
Belarusian opposition leader Svetlana Tikhanovskaya tweeted on Tuesday about Latypov’s case and called for an end to the country’s “state of terror.”
“He was threatened with the persecution of his family if he didn’t admit himself guilty. This is the result of state terror, repressions, torture in Belarus. We must stop it immediately!”
Tikhanovskaya herself fled Belarus in August last year following the country’s disputed presidential elections. Alexander Lukashenko, the country’s long-time leader who has been described as Europe’s “last dictator,” claimed to have won over 80% of the vote. 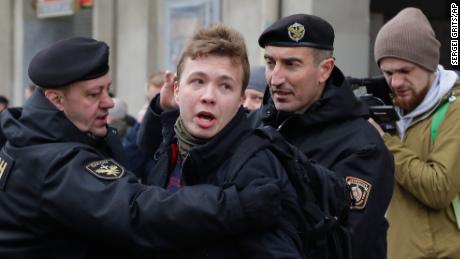 ‘All Belarusians are hostages to Lukashenko’s regime,’ say citizens now cut off from Europe
The election sparked a new wave of mass protests in Belarus, with thousands of people arrested. The US and EU declared the vote fraudulent and imposed sanctions on Belarusian officials over the fraud and the brutal crackdown that followed.
Latypov was detained on September 15, 2020 after he asked for identification from police who were overseeing the painting-over of a political mural in a courtyard in Minsk, according to Viasna 96.
Viasna 96 also said Latypov underwent surgery on Tuesday after he cut himself and did not suffer from damage to vital organs.
Latypov is just one of many activists, journalist and protesters facing charges in Belarus.
The arrest of dissident journalist Roman Protasevich and student Sofia Sapega sparked an international outrage last week. The pair were detained after their Ryanair flight traveling from Athens to the Lithuanian capital Vilnius was intercepted and forced to land in Minsk as it overflew Belarus. 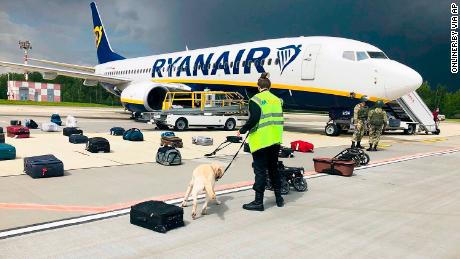 The shocking detention of a journalist in flight
Protasevich has been charged with “organizing mass riots and group actions that grossly violate public order,” from outside the country via his Telegram channel.
On Tuesday, Lukashenko announced during a government conference that he had told his Russian counterpart Vladimir Putin that Belarus will investigate Sapega, state-run news agency Belta reported. Sapega is a Russian citizen.
Belta reported the incident was discussed between Lukashenko and Putin during their recent meeting in Sochi.
“The investigation concerning both persons will proceed in Belarus. It is unbendable. I told the president of Russia about it. I assured him there will be no issues with the consuls’ access [to the arrestees]. I don’t think they take offense, we do more than providing information, if they want to meet, they can go ahead. It is an international practice,” Lukashenko said, according to Belta.

A Belarusian activist stabbed his own throat during a court hearing in Minsk on Tuesday, according to local human rights watchdog Viasna 96.

Analysis: The UK doesn’t just have a problem with women’s safety

She fled home to escape violence. Now she’s been lost at...