The donor, a community member who didn’t want his identity revealed, was inspired to make change after realizing the lack of diversity in Centennial High School’s athlete scholarship.
He reached out to the school’s athletic department with a concern about their program, which required student athletes to have a cumulative grade point average above 90.
“When we tweeted out a photo of these scholar athletes after one of our banquets, it was like 16 kids from the football team, and all but one was White,” Centennial High School athletics director Jeff Burch told CNN. “Our football team does not look like that, our team is predominately African American, and he said ‘That needs to change.'” 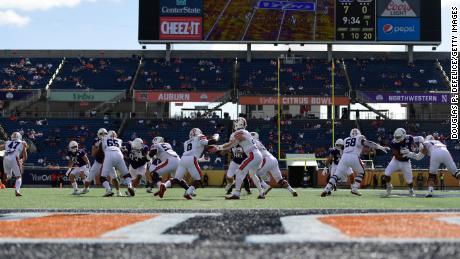 The academic gap between Black and White college football players grew in 2020, report says
The donor decided to find a way to offer Black students an incentive to focus on their grades as much as they did sports.
Read More
While Burch said he expected something like an iPad, TV, or paying off football fees, what the nameless philanthropist offered was far more generous.
For every semester of straight As a Black athlete gets, they will receive a semester of college paid in return.
“It blew my mind,” Burch said. “Many kids thought this was unattainable, they thought they couldn’t do it, but they did. And when they realized what they were capable of, that they can reach the goals they put in mind, it changed their lives.”

‘The scholarship changed my life’

Five students have so far received the scholarship since the launch of the Centennial High School African American Football Scholar Athlete Scholarship in 2019. The school, part of the Fulton County Schools, is located in Roswell, a northern suburb of Atlanta. The school has 1,950 students.
One of the students is Evan Walker, an 18-year-old lineman for the football team. Walker was never one to get bad grades, but they weren’t always As.
“The scholarship changed my life and changed the way I view life totally,” Walker told CNN. “It pushed me into a different mindset. Either I can be average or be above average, and this made me realize I can get all As, just to prove to myself I can get what I want.” 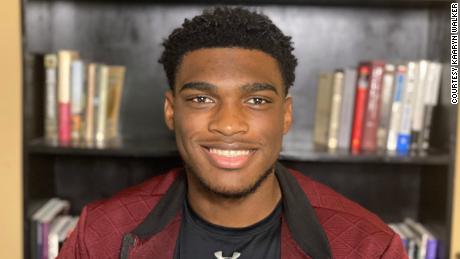 The opportunity motivated the new graduate to see how far he can push himself academically.
And his hard work paid off. Walker, who is choosing between pre-law at Purdue University and civil engineering at Georgia Southern, will receive three semesters of his college tuition paid off.
While the scholarship will help alleviate the financial burden of going to college and having to choose between a dream school or somewhere more affordable, Burch said the impact goes beyond that.
“The financial gift is obviously unbelievable, but the dedication, work ethic, and study habits it takes to get that 90 is going to serve them so well moving forward and preparing them from life after high school,” he said.
“It really has the potential to spark generational change for those students as they have their own families and kids.”
Once preoccupied with the worries of how or where they would be able to attend college, Walker and his four winning peers are now all one step closer to their goals.
“I don’t want to be the person who sees someone doing well and say, ‘I wish that were me.’ I’m going to make sure that is me,” Walker said.
“To any kid who feels like they can’t compete with other White kids that get scholarships they don’t receive, don’t let that stop you from being the best in or outside the classroom, even if it takes all your life.”

Black athletes at a high school in Georgia received the gift of a lifetime when an anonymous donor offered to pay their college tuition if they made straight As.