A version of this story appeared in the June 25 edition of CNN’s Royal News, a weekly dispatch bringing you the inside track on the royal family, what they are up to in public and what’s happening behind palace walls. Sign up here.
But there are some pretty good reasons for the hefty bill — Buckingham Palace is more than a home; it’s the British monarchy’s HQ.
The official London residence of UK sovereigns since 1837, it has 775 rooms, including 19 state rooms, 52 royal and guest bedrooms, 188 staff bedrooms, 92 offices and 78 bathrooms. Today the palace is the monarch’s main office and function space. And the fact she still uses it makes it one of the biggest tourist attractions in London. 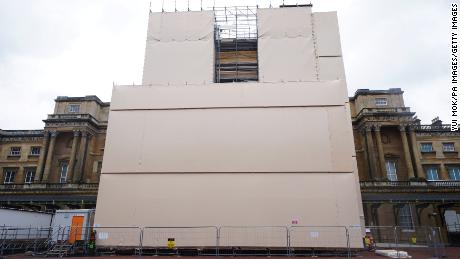 In normal times, more than 50,000 people also visit the property every year as invited guests to various state banquets, lunches, receptions and garden parties. It’s also the instantly recognizable centerpiece of key national celebrations and commemorations, like the Queen’s Platinum Jubilee next summer.
Visitors haven’t been allowed into any royal residences for more than a year, leaving a GBP9.4 million ($13 million) hole in the palace finances, the newly published royal statements also revealed. To put it in perspective, that’s half of what pre-pandemic tourism to palaces used to earn for the Queen’s coffers, which was GBP20.2 million ($28 million) between 2019 and 2020.
Read More
But the upside has been that the refurb has been able to continue unhindered and they are now ahead of schedule. Let’s take you on a quick tour…
We’ll start at the Grand Entrance, where visitors are usually greeted when they drive in from the front. Inside, you can see how the space is currently being used to receive building supplies. 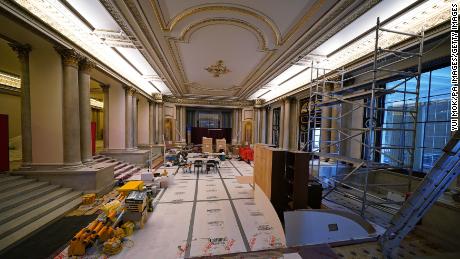 From the Grand Entrance, you go up the Grand Staircase to the State Apartments. Let’s just say they’re not ready for us quite yet. This is a 10-year program of major works for the aging historic home. 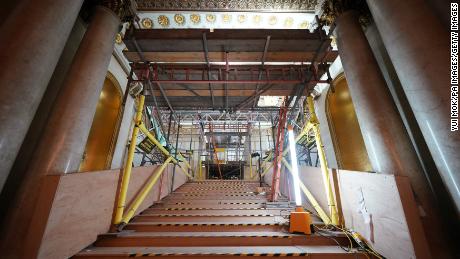 At the top of the stairs, you enter the Picture Gallery, where key pieces from the Queen’s priceless art collection usually hang. Scaffolding takes pride of place these days as they replace the roof. A closeup of the Picture Gallery roof shows how vulnerable it had become. 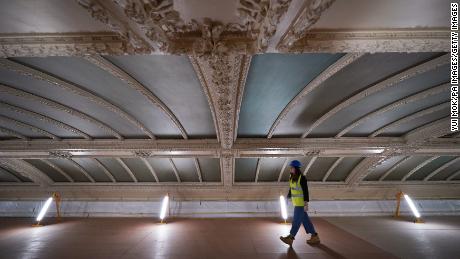 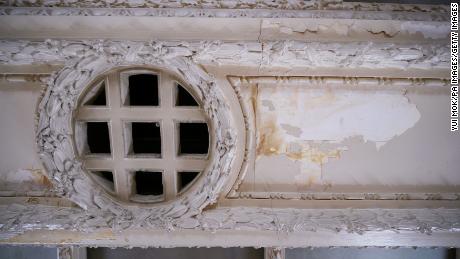 Off the Picture Gallery is the Centre Room, where the floor has been lifted. Much of the renovations throughout the palace will ultimately be invisible to sightseers because they involve replacing electrics and plumbing that were installed in the 1950s. The overhaul was approved by the government back in 2017 to ensure it was fit for purpose for years to come and to mitigate the risk of possible fire or water damage.
Many remember the fire that broke out at Windsor in 1992. A faulty spotlight in Queen Victoria’s Private Chapel quickly ignited a blaze that would destroy 115 rooms and cause millions in damage. Astonishingly, only two artworks were lost in the incident. 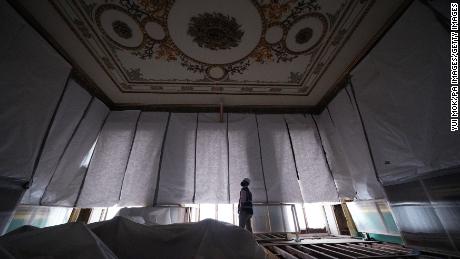 Back in London, the first major restoration at Buckingham Palace since the end of World War II has revealed something of a makeshift time capsule. Newspapers and cigarette boxes from that era have been found as the floorboards have been taken up.
The East Wing — which faces The Mall — is having new elevators put in to make the building more accessible and energy-efficient. Rooms have been completely stripped of flooring and furniture and thousands of artworks and artifacts have had to be removed to allow this to happen. 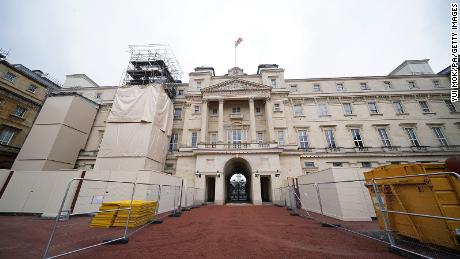 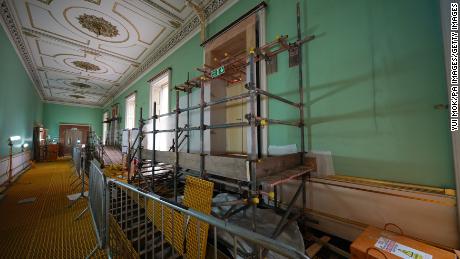 Despite the ongoing construction, the Queen is still using parts of the palace that haven’t been taken over by builders. This week, she met the Prime Minister there for the pair’s first face-to-face weekly audience since March 2020. While the Queen isn’t expected to return to the palace full time just yet, things are returning to some sense of normality, and we can expect her to use her administrative hub in London more frequently in the months to come.
The Queen’s treasurer, Sir Michael Stevens, justified the increased spending on the palace refurbishments during the pandemic, saying: “Obviously as we look ahead to 2022 we have the Platinum Jubilee celebrations to look forward to and all our works plans for Buckingham Palace are designed to ensure the Palace can play a significant part in those celebrations, such as garden parties and of course the balcony appearance at Trooping the Colour.” 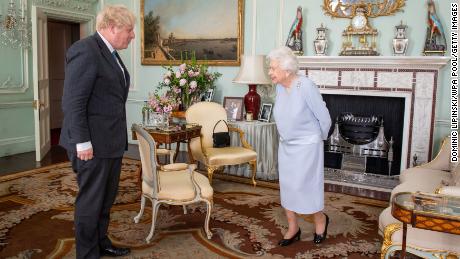 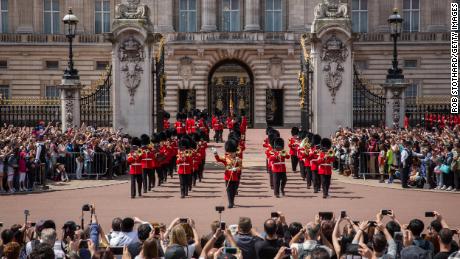 A senior palace source has admitted the royal household “must do more” to improve the diversity of staff as its annual financial report was released. The Sovereign Grant report disclosed for the first time that the proportion of ethnic minority employees within the royal household is 8.5% — with a target of 10% by the end of 2022.
According to a 2011 census, 14% of the population of England and Wales were from an ethnic minority background, while in Scotland it was 4%.
The yearly financial statement also revealed the royal household has continued to work on improving its diversity strategy, which existed before the Duke and Duchess of Sussex‘s allegations of racism within the royal family earlier this year.
The figures “are not what we would like but we are committed to improving this,” the senior palace source said, adding that the decision to release the diversity statistics was to “ensure that we are both open and transparent about our efforts to improve and we fully expect to be held accountable for the progress that we make.” Read the full story here.

WHAT ELSE IS HAPPENING

William and Harry will reunite next week.
Kensington Palace has confirmed Princes William and Harry will appear at the unveiling of a statue they commissioned of their mother, Diana, in the Sunken Garden of the royal residence next Thursday. The brothers will be joined by members of the statue committee as well as the sculptor, Ian Rank-Broadley, and the garden designer, Pip Morrison.
Philip celebrated in new exhibition.
A new public display to celebrate the Duke of Edinburgh’s legacy has opened at Windsor Castle. Curated by the Royal Collection Trust, “Prince Philip: A Celebration” collects objects that mark significant moments and achievements from the life of Britain’s longest serving consort. Among the pieces curated for the exhibition is the Chair of Estate from the Throne Room at Buckingham Palace, a portrait Philip commissioned of himself as chair of the Restoration Committee that oversaw works following the 1992 Windsor fire, and a First Nations feather headdress he was given in 1973 while on a visit to Canada. 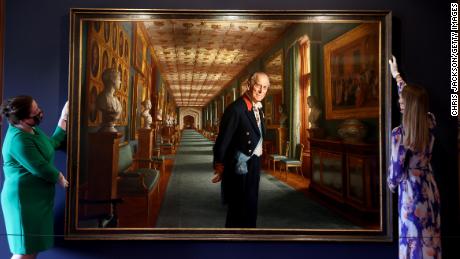 Meghan’s secret messages for Archie in her book.
The Duchess of Sussex made sure to hide a few nods to her mother-in-law, the late Princess Diana, in her children’s book, “The Bench.” Meghan said illustrator Christian Robinson included details, like Diana’s favorite flowers, for her son Archie to pick up on. The duchess also said she hoped readers would feel represented in the pages of her book in an interview broadcast on National Public Radio last weekend.
It’s swan-counting time!
The yearly census of the swan population on the River Thames has been announced across three days in 2021. The historic Swan Upping ceremony — which takes place during the third week of July each year — dates back to the 12th century, when the Crown claimed ownership of all mute swans, which were eaten at banquets and feasts. These days, the monarchy’s swan marker counts the number of young cygnets to ensure the population is protected. Announcing the schedule, the Queen’s current Swan Marker, David Barber, said the public had been alert during the lockdown and reported injured swans for rescue. He also said there had been a noticeable increase in river pollution, which was “entirely avoidable,” adding it has had “a devastating impact upon both the wildlife and the environment.” 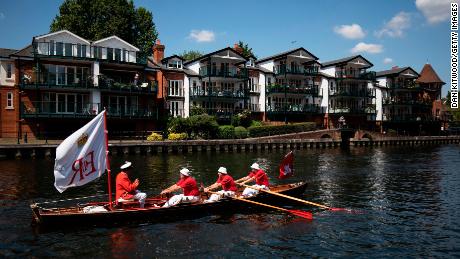 PHOTO OF THE WEEK

The Duke of Cambridge turned 39 this week, garnering the usual shoutouts from family members on their social media accounts. To celebrate William’s final birthday of his 30s, Prince Charles and his wife, Camilla, shared a couple of snaps alongside their message. One was of the pair with William at an event, while the other was a black-and-white throwback of baby William on his father’s knee. 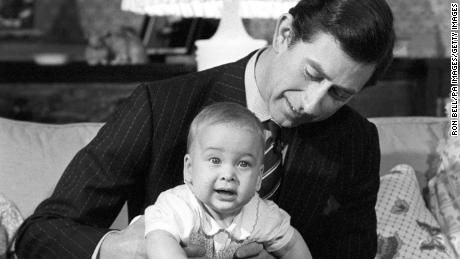 “The awards ceremony will be a truly global event, connecting people from all over the world to celebrate these inspiring leaders and their innovations to solve the world’s greatest environmental challenges.”

The Duke of Cambridge revealed the award ceremony would be held at London’s Alexandra Palace. The Earthshot Prize will celebrate those trying “to solve the world’s greatest environmental challenges” and see five finalists claim GBP1 million (around $1.4 million) each.

The Queen has a whopping GBP369 million ($514 million) budget to refurbish her London pad — a figure that may seem excessive when she spends most of her time at Windsor Castle these days. This week, the Queen’s royal accounts for the past financial year were published, revealing GBP31.6 million ($44 million) had been spent on the renovation in the past 12 months, up from GBP16.4 million ($23 million) the year before.