Among a lineup of gray-haired middle-aged men vying for the top job, Baerbock — a 40-year-old former professional trampolinist — stands out.
Baerbock is the Green party’s first ever candidate for chancellor, in September’s momentous elections that will see Merkel step down after almost 16 years at the helm.
The question is, can Baerbock translate that “breath of fresh air” into real winds of change for Germany? 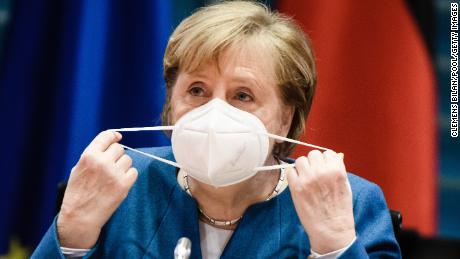 Angela Merkel must beat the pandemic to save her legacy. Time is running out
Since announcing Baerbock as their candidate, the Greens have enjoyed a bounce in opinion polls, propelling them into first place ahead of Merkel’s center-right Christian Democratic Union (CDU) and Christian Social Union (CSU) bloc.
Read More
The Greens’ surge coincides with a slump in the CDU/CSU’s popularity; the conservatives are mired in corruption scandals, leadership squabbles, and questions over their handling of a ferocious third wave of the coronavirus pandemic.
Along with the party’s co-leader, Robert Habeck, Baerbock has steered the Greens — once known as the “anti-party party” — to the center of German politics.
“There is something of the Tony Blair about her,” said Nicholas Wright, lecturer in EU politics at University College London.
“The fact that she comes from the pragmatist, realist part of the party, basically saying: ‘It’s all very well having these ideals and principles, but they don’t matter if we can’t get into government and do anything.'”

Baerbock grew up on a farm in a small village in Lower Saxony, in what was then West Germany, with her engineer father, social education worker mother, two sisters and two cousins.
She was born in 1980 — the same year Germany’s Greens party was founded.
As a child, her hippyish parents took her on anti-nuclear demonstrations.
“It was a lot more radical back then,” Wright said of the party that emerged in the wake of the 1960s student movement.
“Militant muesli eaters,” was how some critics described them, he added.
Much as they are today, the Greens were strongly pro-environment and anti-nuclear. But back then they were also anti-NATO and suspicious of multilateralism. That stance has shifted over the decades. 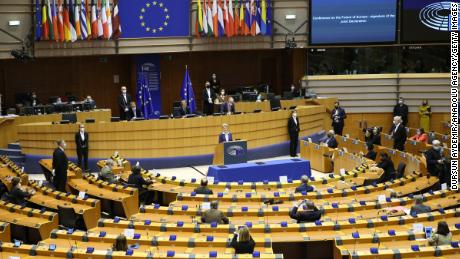 The looming crisis in Brussels that no one is talking about
Baerbock came of age just as the party was moving from the political fringes to the mainstream; when she was in her late teens, the Greens became junior partners with the center-left Social Democratic Party (SPD) in a ruling coalition.
It was a significant moment in the party’s journey — even if journalists at the time still asked Green politicians snide questions about muesli.
Fast forward to 2021 and the party’s candidate for chancellor is a “strong multilateralist,” said Wright. Baerbock supports the European Union, and Germany’s role in NATO.
That said, she has also been critical of targets for NATO members to spend 2% of their GDP on defense.

Jumping up the ranks

Before she entered politics, Baerbock was a champion trampolinist, winning bronze three times in national competitions.
“It’s a bit of an outsider sport,” said Waltraud Schelkle, professor of political economy at the European Institute, London School of Economics.
“It shows she had a certain self-discipline, ambition, and toughness at an early age.”
Indeed Baerbock’s political rise has been swift. She studied political science and public law at the University of Hamburg, completed a master’s degree in international law at the London School of Economics, and for a few years was a journalist at German newspaper Hannoversche Allgemeine Zeitung.
In the mid-2000s Baerbock worked as an assistant to Green MEP Elisabeth Schroedter. After unsuccessfully running for the Bundestag in 2009, Baerbock finally got a seat in 2013; she served as the Greens’ climate policy spokesperson, and later its co-leader. 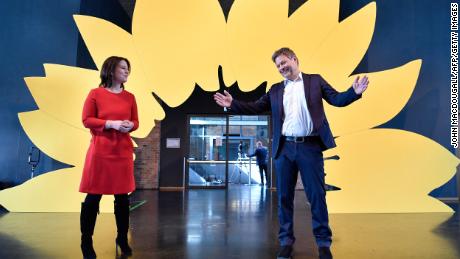 Baerbock now lives in the city of Potsdam, just outside Berlin, with her political consultant husband and two young daughters.
She is the “rising star” of German politics, appealing to well-educated, culturally progressive voters, according to Wolfgang Merkel, professor of political science at Berlin’s Humboldt University.
That said, Baerbock isn’t the most charismatic speaker, and has a tendency to focus on the details.
“Some compare her style to Angela Merkel, because she is not super charismatic, she is not a very funny person,” said Helene Bubrowski, political journalist at the Frankfurter Allgemeine Zeitung, who has interviewed Baerbock in the past.
Bubrowski recalled stories about the Greens leader calling colleagues late at night “because she has a question about paragraph three, on a particular page, of an international treaty.”
On “any kind of green energy, she could talk for hours,” added Bubrowski. “It’s a very down-to-earth, very pragmatic approach to politics.”
That’s not to say Baerbock doesn’t smile or laugh along with others. But when it comes to German politics, “humor is not one of the major virtues you have to have as a politician,” said Professor Merkel.

Climate is, unsurprisingly, at the heart of the Greens campaign, and Baerbock is pushing further on the government’s already ambitious emissions targets.
The party is calling for a 70% cut in greenhouse gas emissions from 1990 levels by 2030, compared to the current government goal of a 55% cut.
That would involve ramping up the phase-out of coal and nuclear, in favor of renewables.
It would also mean an end to fossil fuel-powered cars on Germany’s roads — a striking pledge for a nation with a proud auto engineering history.
When it comes to international affairs, Baerbock has vowed to get tough on Russia, criticizing its military presence on the Ukraine border, and opposing the Nord Stream 2 gas pipeline from Russia to Germany.
She has taken a hardline on China too, over human rights concerns.
To some degree, Merkel’s environmental push has paved the way for the Greens’ success. The Chancellor “made green policies more mainstream,” said Schelkle, “even if she did jump on the bandwagon.”
Merkel “has forced the Greens to become more middle,” Schelke added.

Baerbock’s success at the polls will largely hinge on whether the CDU/CSU group’s candidate, Armin Laschet, can hold onto Merkel’s supporters when the country’s second-longest serving chancellor steps down.
Laschet is the 60-year-old premier of North Rhine-Westphalia state, a devout Catholic whose father was at one point a coal mining engineer. He was selected as the party’s candidate after a torturous leadership tussle, and opinion polls so far suggest he is an unpopular choice for chancellor. 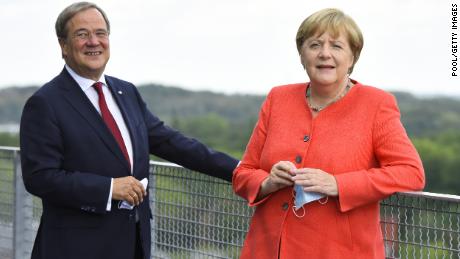 Experts say a win for Baerbock would be a significant milestone for Green politicians across Europe.
Were she to emerge victorious in September, Wright said it would bolster “the ‘green surge’ that seems to have been taking place across the continent in the last few years.”
He points out that Ireland’s Green Party is a member of that country’s ruling coalition, while collectively the Greens had their best ever showing in the European Parliament elections in 2019, making them the fourth largest grouping there.
“A Green Chancellor in the most powerful [EU] state sends a powerful message of what is possible,” Wright added. “With the center-left in the electoral doldrums almost everywhere, the Greens are emerging as a realistic progressive alternative. A win in Germany would be a huge fillip.”
If Europe’s biggest economy was successfully headed by the Greens, “most of the other countries and their citizens would lose their fear that green politics and policies harm welfare and economy,” said Professor Merkel.
It would “inspire particularly West European politicians that green politics and policies do not only work — but pay out electorally as well,” he said.
But September is a long way off, and victory is far from certain — a lot depends on whether the CDU/CSU’s supporters unite behind Laschet.
By German political standards, Baerbock — a young woman with two small children and relatively little political experience — is the more “adventurous” option for voters, said Bubrowski.
And German voters are “not very adventurous,” she added. “I don’t think she’s already won the election — there’s still some way to go.”

Cast an eye over the candidates hoping to succeed Angela Merkel as German Chancellor, and one of the phrases most often used by political pundits describing the Green party’s nominee Annalena Baerbock is: “A breath of fresh air.”