Goita — who also led last year’s coup — said that President Bah N’Daw, Prime Minister Moctar Ouane and several of their advisors had been removed from office because they had failed to consult him on a cabinet reshuffle, according to a statement read by Goita’s adviser, Baba Cisse, on national broadcaster ORTM Tuesday.
A senior diplomatic source told CNN that two key actors in the putsch, Colonels Sadio Camara and Modibo Kone, had not been included in the new government that was announced on Monday, adding that that may have been a key reason for the decision to trigger a coup.
The current whereabouts of the president and prime minister are unclear, and CNN has not been able to reach N’Daw, Ouane, or their representatives for comment. 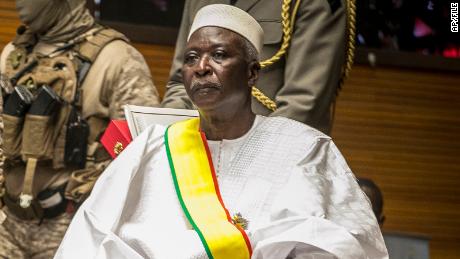 N’Daw and Ouane were in charge of a transitional government created in the wake of an August 2020 coup. The coup, led by Goita, overthrew then-President Ibrahim Boubacar Keita and then-Prime Minister Boubou Cisse. The transitional government, headed by N’Daw, had promised to hold legislative and presidential elections in February 2022 to restore a democratic government.
Read More
In the statement read by his adviser on Tuesday, Goita is reported to have said he would “follow the transition process” and maintain the elections planned for 2022.
On Monday, a joint statement by the country’s Local Transition Monitoring Committee — which monitors Mali’s return to civilian oversight after a military coup in August 2020 — said that N’Daw, Ouane and some of their staffers had been arrested and were in the custody of military officers.
The committee, which includes the African Union, the United Nations mission in Mali and the Economic Community of West African States (ECOWAS) said in the statement that “along with members of the international community, including France, the United States, the United Kingdom, Germany and the EU, express their profound concern regarding the situation in Mali marked by the arrest of the transition President, the Prime Minister and some members of their staff.”
“They demand the immediate and unconditional release of those authorities and insist upon the fact that the members of the military who hold them will be personally held accountable for their safety,” the statement said.

The arrests, described in the (ECOWAS) statement as an “attempted power grab,” continue a cycle of political turmoil that has plagued the country for more than a decade.
On Tuesday France, a former colonial power and military ally to Mali, said that they are ready to sanction those involved in the coup.
“In the coming hours, if the situation hasn’t cleared up, we are ready to take targeted sanctions against the people involved,” French President Emmanuel Macron said, adding: “What has been carried out, yet again, by putschist military forces, is an unacceptable coup within a coup, which calls for immediate condemnation.” French Foreign Minister Jean-Yves Le Drian also requested a UN Security Council meeting.
A delegation from the main regional decision-making body — the Economic Community of West African States (ECOWAS) — visited Mali on Tuesday, according to a joint statement from ECOWAS, the United Nations, African Union, European Union, and several European countries.
Former Nigerian President Goodluck Jonathan, who was dispatched to Mali by ECOWAS after the 2020 coup, will once again act as a mediator for the regional body, the diplomatic source also said.

Mali’s transitional vice president Assimi Goita said Tuesday that he removed the transitional president and prime minister from office, confirming reports from several international groups that the leaders had been ousted on Monday.

Gnawed bones of 9 Neanderthals found in Italian cave in ‘extraordinary’...

Everything we know about the ‘hijacked’ plane

Family of American imprisoned in Russia believes he was targeted over...

Late and leaky. How the UK failed to impose an effective...

Peru confronts a fork in the road as it chooses a...