On Sunday, the anniversary of that first win in 1996, Netanyahu addressed the country as he faced the possibility of the end of his political career after his former lieutenant, Naftali Bennett, announced he would work with opposition leader Yair Lapid to form a new government.
Blasting Bennett, leader of the small right-wing party Yamina, for committing what he called the “fraud of the century,” Netanyahu portrayed him as a power hungry politician who “only cares about himself.” It was a statement that some Israeli political watchers found to be more than ironic considering Netanyahu’s past political maneuvers.
The announcement came after Bennett had already once announced he was working with Lapid, only to backtrack two days into Israel’s latest conflict with Hamas-led militants in Gaza. But a few days after the ceasefire was announced, Bennett was back at the negotiating table with Lapid. 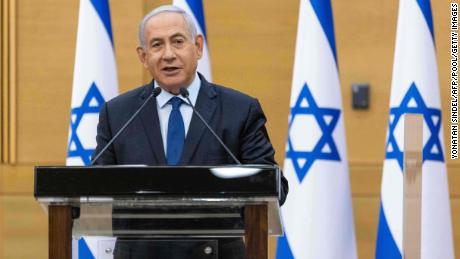 A quarter of a century ago, Israelis were stunned when Benjamin Netanyahu narrowly beat Shimon Peres to become Israel’s youngest-ever Prime Minister.

Myanmar junta offers ceasefire to some, as UN envoy warns of...

Ethiopia rejects US calls to pull troops from Tigray after CNN...

Belarusian activist stabs his throat during a court hearing in Minsk