Asia’s third biggest economy recorded a rise in gross domestic product of 1.6% in the January-March quarter, compared with the same period a year earlier, according to official statistics published on Monday. This is faster than the 0.5% growth reported in the previous quarter.
The stronger performance wasn’t enough to prevent the economy contracting by 7.3% for India’s fiscal year as a whole, which ended in March.
India slipped into recession for the first time in nearly a quarter of a century last year, following a sweeping, months-long national lockdown that placed severe restrictions on business activity and travel. While those measures helped control the spread of Covid-19, many of the country’s poorest and most vulnerable were stranded without income for weeks, leaving deep scars on the economy. 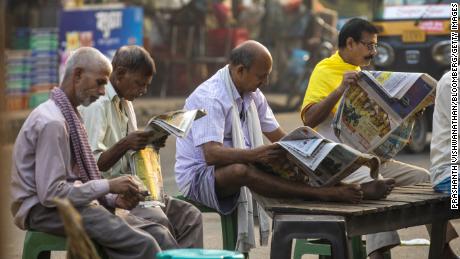 Indian media have gone easy on Modi. That’s changing because of the pandemic
India had hoped its recent recovery would begin to heal those economic wounds. As recently as March, the Organization for Economic Cooperation and Development projected that India would regain its status as the world’s fastest growing major economy, and forecast 12.6% growth in India’s current fiscal year.
Read More
But that was before a brutal second wave of the pandemic hit the country. For weeks, India was reporting thousands of Covid-related deaths every day, a staggering toll that only recently has started to abate. To prevent millions of people from slipping into poverty once again, Prime Minister Narendra Modi resisted pressure to impose another national lockdown — even as the infection rate continued to spiral.

Even so, regional governments issued restrictions in many key manufacturing hubs, and the impact of that is likely to hit the economy.
Unemployment has already soared above 10% in May — a level not seen since the lockdown last year, according to the Centre for Monitoring Indian Economy.
“This is not normal for India,” the private think tank said in a statement. “The double-digit unemployment rate seen in recent times indicates that even these [regional] restrictions are taking a toll on the economy.”
Despite these grim numbers, most economists still believe the country will register growth of about 10% this year, provided the pandemic can be contained quickly. But they are worried about the slow pace of vaccinations, which may continue to dampen activity.
“With the vaccination drive losing pace, we have not only penciled in a bigger contraction in [the April-June quarter] recently, but also look for a more muted recovery thereafter,” Priyanka Kishore, an economist at Oxford Economics, wrote in a research note on Monday.
The OECD on Monday slashed India’s growth projection for this fiscal year to 9.9%.
“India is projected to be the fastest-growing G20 economy in 2021 — but also the one which is the furthest away from its pre-crisis GDP trend,” the OECD said, adding that a “marked slowdown may have taken place in the April-June quarter, although the overall annual impact is likely to be muted.”

India’s economy was turning a corner earlier this year as the country started to accelerate out of the recession it suffered in 2020. But a disastrous surge in Covid-19 cases threatens that progress.

Covid-19 drove hundreds of Africans out of Guangzhou. A generation of...

Researchers discover a dinosaur preserved sitting on a nest of eggs...

Britain is sending a huge naval force through some of the...