Cyclone Tauktae, the strongest storm on record to hit India’s west coast, has killed at least 40 people since it made landfall in western Gujarat state on Monday night.
The cyclone formed in the Arabian Sea, and tore past the financial hub of Mumbai, in Maharashtra state, before reaching Gujarat. Its strong winds and heavy rain caused flooding and destruction in low-lying coastal regions, even before it made landfall. 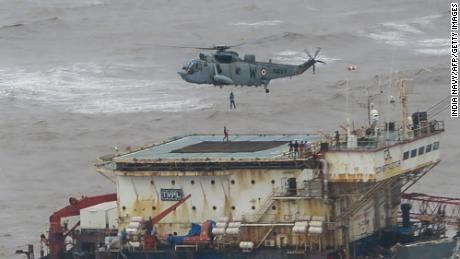 Branches of the military, including the air force and navy, are now scouring the sea to rescue personnel on all operational oil rigs and vessels that were in the path of the cyclone.
One barge, operated by the Indian Oil and Natural Gas Corporation (ONGC), held a crew of 261 people when it sank in an offshore oilfield on Monday due to the force of the cyclone. As of Thursday, the navy has rescued 188 crew members and recovered 26 bodies, said a navy spokesperson, adding it was still searching for the remaining 47 personnel.
Read More
“We have five ships in the area and two are coming back with the rescued personnel and remaining three are staying for search and rescue,” said spokesperson Vivek Madhwal. 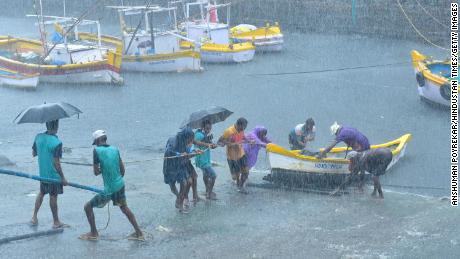 India lashed by strongest cyclone to ever hit west coast as it reels from Covid disaster
Late Tuesday, the navy said search and rescue operations would include helicopters and other naval assets, despite the “extremely challenging circumstances.”
Another barge, the Gal Constructor, ran aground off the west coast of Mumbai on Monday. The navy deployed a helicopter and several emergency vessels to evacuate the 137 crew members on board, all of whom are accounted for.
Two other barges are being towed to safety by ONGC tugboats, Madhwal said. ONGC is India’s biggest oil and gas company, with many of the barges used to service its offshore operations.

So far, deaths have been recorded in the western states of Maharashtra, Kerala, Karnataka, Gujarat and Goa.
Harshal Patel, the Gujarat relief commissioner, said Wednesday they were “accidental casualties” in the wake of the cyclone. Other state authorities have cited lightning strikes, building collapses, and the falling of trees and electricity poles as cyclone-related causes of deaths.
India’s Prime Minister Narendra Modi is expected to visit Gujarat later on Wednesday to conduct an aerial survey of districts impacted by the cyclone, according to the Gujarat chief minister’s office. 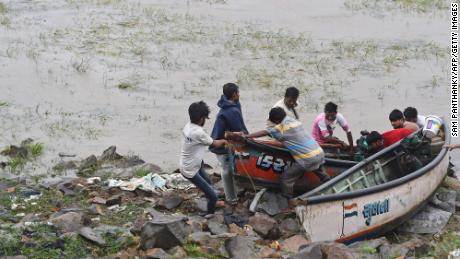 The cyclone had maximum sustained winds of 205 kilometers per hour (125 mph), equivalent to a high-end Category 3 hurricane, when it made landfall.
As of late Tuesday, it had weakened into a deep depression. It is expected to weaken further on Wednesday as it moves north into Rajasthan state, according to the Indian Meteorological Department.
In Gujarat, the hardest-hit state, 236,018 people were evacuated to 3,575 relief camps. The number of missing people is “yet to be assessed,” according to data from the State Emergency Operation Center on Tuesday night.
One major concern had been the impact of the cyclone on Covid-19 relief and treatment efforts, as the country grapples with its second wave of the virus. Covid patients were among those who had to be evacuated, and power supply was disrupted to 100 coronavirus hospitals Tuesday with at least four facilities losing electricity, prompting frantic efforts to restore service. 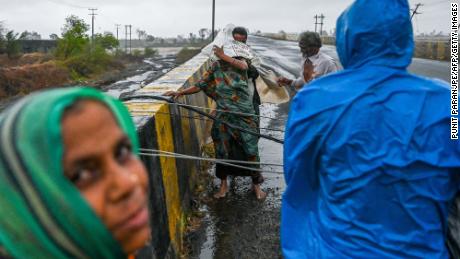 All Covid-19 hospitals remained operational during the cyclone, Patel said on Wednesday.
Though India’s daily new cases have trended downward in the past week, the International Federation of Red Cross and Red Crescent Societies warned Monday the cyclone posed “a terrible double blow” during the pandemic.
And daily deaths continue to rise. On Wednesday, the country reported 4,529 additional Covid-related fatalities — its highest daily toll since the start of the pandemic.

The Indian military is continuing search and rescue operations for a third day after a deadly cyclone left scores missing and stranded at sea.

What we know about the Covid-19 Delta variant first found in...

White House meeting with Japan and South Korea to focus on...

I’ve watched Baghdad descend into chaos. But it’s the city where...

Changes in India’s rainfall could seriously impact more than a billion...