“It is an extraordinary discovery,” Dario Franceschini, Italy’s cultural minister, said in a statement. “The whole world will be talking about it.”
One of the Neanderthals dates back 90,000 to 100,000 years, according to a statement by the Italian Cultural Ministry, while the other eight date back 50,000 to 60,000 years. All were male, and one is suspected to have been younger than the others. 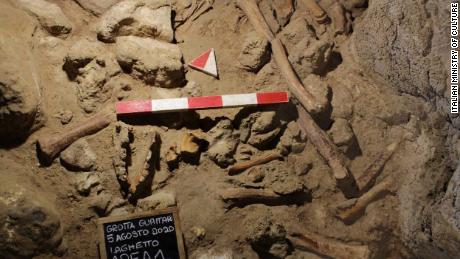 Archaeologists started research in the cave, which was discovered by accident in the 1930s, to reach an area that had been blocked by an ancient earthquake or more recent landslide. The cave is where two other skulls have been found, including what is considered to be a well-preserved Neanderthal skull discovered in 1939.

The cave is a significant Neanderthal site 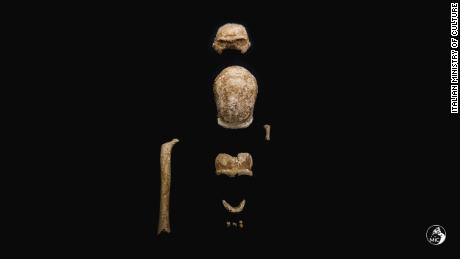 Read More
“Together with the two other skulls found in the past, they bring the total number of individuals in the Guattari Cave to 11, confirming it as one of the most significant sites in the world for the history of Neanderthal man,” the cultural ministry said in its statement.
Discoveries of ventilation holes in the ceiling of the cave had led some anthropologists to believe that Neanderthals also engaged in ritual cannibalism, according to the ministry, which added that some of the discovered bones had been burned. 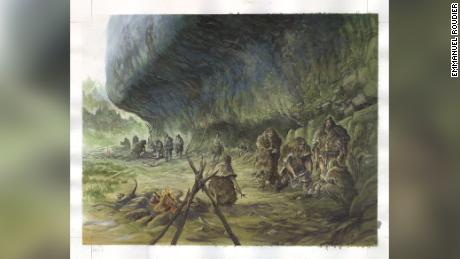 Neanderthal child’s skeleton buried 41,000 years ago may solve long-standing mystery
Deeper areas of the cave also turned up bones with cuts in them.
Unattached skulls, two teeth and vertebrae were among the discoveries. Hundreds more bones attributed to elephants, rhinoceroses, giant deer, horses and bovine aurochs, a now extinct cow-like animal, were also discovered in the cave.
“Many of the bones showed clear signs of gnawing, likely by the hyenas,” the statement said though the ministry clarified that it is not clear whether the animals killed them or ate them after they died. Archaeologists believe the hyenas may have used the cave as a place to bring back their kill to store and eat it.

Some modern humans have Neanderthal DNA

Neanderthals died out some 40,000 years ago but interest in their history has been sparked recently by the advent of home DNA tests which can detect traces of Neanderthal DNA in some people. The San Felice Circeo area now represents one of the most important finds in the study of the ancient humans and the cave offers something of a time capsule that includes clues to the history of both man and beast.
Work will now begin to study the remains to learn more about the ancient human society, archaeologist Francesco Di Mario, who leads the project, said in a video attributed to the culture ministry. They will also study the cave sediment with an eye on looking at ancient climate change, which is thought to have contributed to the demise of the Neanderthal species.
“It will help us understand the climatic changes that occurred between 120,000 and 60,000 years ago through the study of animal species and pollen,” said archaeologist Mario Rolfe of Tor Vergata University in Rome at the presentation of the discovery. Excavations will continue in hopes of finding tools and other clues about ancient Neanderthal life.

The discovery of the ancient remains of nine Neanderthals, a pack of hyenas and several elephants in the Guattari Cave near the Italian resort town of San Felice Circeo has astounded archaeologists, who have long suspected that a considerable population lived in the area.

At least 11 killed, 98 injured in Egypt as train derails

76 all-cash offers on one home. The buying madness shows no...

Why are more young people getting sick with Covid-19 in Brazil?

This water meter can shut off leaks before they cause damage