Vito used to work long hours peeling sacks of garlic, making about $2 a day, while her husband worked as a day laborer in construction. But now their work has dried up, a casualty of an economic downturn in the Philippines after multiple coronavirus lockdowns. And trying to feed so many mouths has become a daily struggle for survival.
“We don’t have anything for my children’s food, for our daily expenses,” Vito said. “Sometimes, at night, we don’t have anything to eat, we can only wait for the next day.”
Vito lives in Baseco Compound, one of the poorest areas of Manila, where almost 60,000 people are crammed onto a patch of reclaimed land in the capital’s port area. The sprawling settlement relies almost exclusively on the economic activity around the dock — most of which has ground to a halt. And the lockdowns have included bans on fishing in the sea, a lifeline for many. 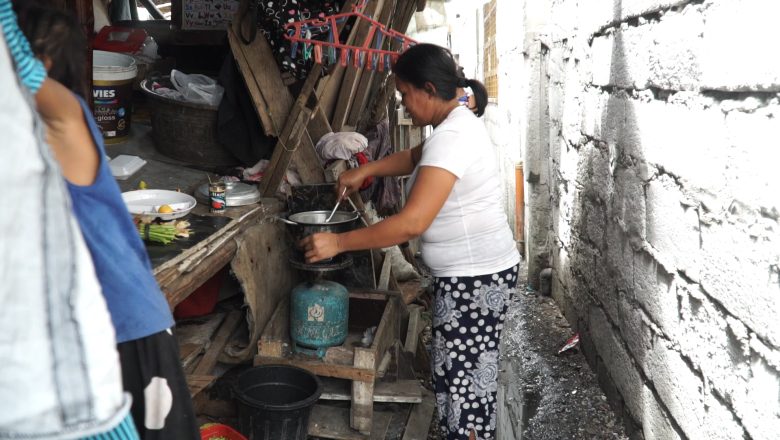 Mona Liza Vito struggles to feed her family.
Read More
“If they don’t catch fish, there is nothing to eat. Some just live on burnt rice and salt with water,” said Nadja de Vera, project coordinator of local organization Tulong Anakpawis. “It remains shocking with the amount of poverty here.”
The Philippines was one of Asia’s poorest countries even before the pandemic. Toward the end of 2020, nearly a quarter of Filipinos were living in poverty, surviving on about $3 a day, according to the World Bank.
More than 3 million children in the Philippines have stunted growth, and 618,000 children are classed as “wasted” — defined by the World Health Organization as low weight for height, which usually occurs due to lack of adequate food or prolonged illnesses. That’s among the highest rates in the world — and the figures were recorded before the most recent lockdown that started in March.
Desperate to avoid more lockdowns and kickstart the faltering economy, the government is now pinning its hopes on vaccines.
But while health experts say vaccination is a crucial tool in bringing an end to the pandemic, many Filipinos are skeptical, and vaccination take-up remains dangerously low. 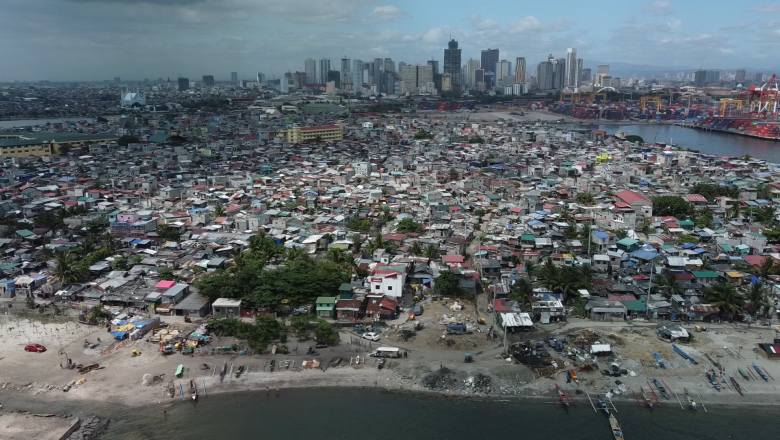 Baseco Compound is one of the poorest areas of Manila.

‘Eating one meal a day’

The economic turmoil began last March when Philippines President Rodrigo Duterte imposed a strict lockdown in the capital Manila and surrounding areas that lasted for months.
Since then, restrictions have eased and tightened according to case numbers. The last nationwide lockdown, imposed in March, started to ease in mid-May, after the number of daily cases fell from a high of more than 10,000.
Yet, with more than 5,000 Covid-19 cases per day, the threat of the virus lingers, as does the economic hardship.
Vera, from Tulong Anakpawis, organizes a community kitchen that feeds the hungry in Baseco. It’s one of hundreds of food banks that have popped up across the country to help counter a growing hunger crisis. The community kitchens take donations from farmers and fishermen, and anyone who can afford it, then distribute the food to whoever needs it most. Their motto is: “Give what you can, take what you need.”
When word spreads that the kitchen is coming, hundreds line up at dawn for the chance to receive a small bag of food. The desperation is sometimes visible as people jostle to get a ticket, and there are never enough to go round. “What these people need is urgent,” Vera said. “Many people here can only afford to eat once a day.” 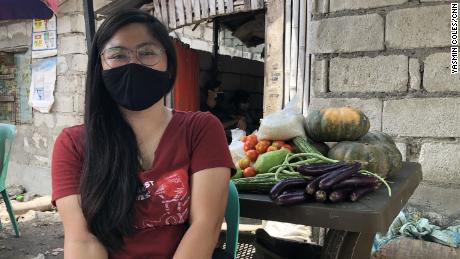 Vera says the kitchens are bringing communities together, giving hungry families the staples they need to survive when government support is minimal.
“We have no choice but organize something like this,” Vera said. “I hope the government will learn that this is a call to action to them, that the people are willing to help each other, and we hope that the right amount of resources will finally reach those who really need it.”
During the pandemic, the government has distributed food parcels sand provided several cash handouts of 4,000 pesos ($80) to the poor. Vito said she used that money to pay off her store debts, buy medicine, and cover some of the family’s living expenses.
But she said it’s not nearly enough, so the community kitchens have become her family’s only regular form of sustenance.
“I am grateful,” Vito said. “Our rice and vegetables are free. My children are no longer hungry.”

The Philippines government knows vaccinating the population is the only way out of the current crisis, but it’s struggling to convince people to take the vaccine.
Less than 1% of the country’s 108 million people have been fully inoculated, according to data compiled by CNN.
The country announced last week it had received 8.2 million doses, but so far only 4 million people have received at least one injection. Some Filipinos say they won’t take it at all.
According to a Social Weather Stations (SWS) survey of 1,200 people in May, 68% of respondents were uncertain or unwilling to get the vaccine. Their biggest concern was possible side effects, or that they might die from the vaccine. For comparison, a global survey by Gallup of thousands of people in 116 countries and areas during 2020 found 32% of people wouldn’t take the vaccine.
Mistrust of vaccines is major issue in the Philippines, and a dengue vaccine controversy hangs over the country’s efforts to immunize against Covid-19. 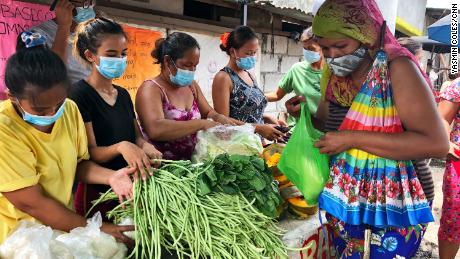 In 2017, the Philippines suspended a large-scale vaccination drive after the French drugmaker Sanofi Pasteur found that its dengue vaccine, Dengvaxia, could have unintended consequences in patients who had never been infected with the mosquito-borne virus.
Analysis found people who received the vaccine could suffer a more serious case of dengue if they were later infected. By the time the rollout was stopped, more than 730,000 Filipinos had received Dengavaxia.
Filipinos’ reluctance to take the Covid-19 vaccine could derail any hopes of the country reaching herd immunity — or even the government’s own target of vaccinating 50 million to 70 million people by the end of the year. 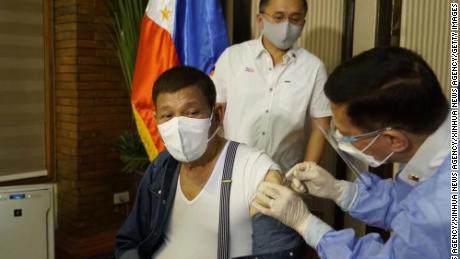 As China awaits WHO approval for its vaccines, one country is sending theirs back
The government started rolling out its Covid-19 vaccine program in March, and progress has also been slow — medics are still in the first phase of vaccinating health care workers, the elderly and those with pre-existing medical conditions.
To increase public confidence in vaccines, Philippine President Rodrigo Duterte took a dose from Chinese drugmaker Sinopharm in early May, an event broadcast on national television. But the public display backfired, and Duterte halted the Sinopharm deployment a few days later after critics pointed out the vaccine had not been approved by the country’s drug regulator.
The Philippines has also ordered vaccines from Sinovac, AstraZeneca, Pfizer, and Russia’s Sputnik.
Millions of doses are scheduled to arrive in June, the government says. 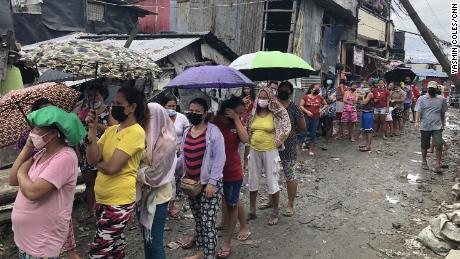 Treating Covid with ginger and honey

Officials and health workers are using public messaging to improve confidence in the vaccines.
But Dr. Mike Marasigan, a medical officer from the Quezon City Health Department, said the hardest groups to reach are the poorest communities.
“We’ve been having a hard time targeting those in the depressed areas,” Marasigan said. “They were also our problem when asked to report their symptoms, and they’re also the ones we’ve been having a hard time convincing that they need to get vaccinated.”
Retired seamstress Letty Zambrona, 65, from Paranaque City, Manila, says she won’t take a vaccine, despite being in a vulnerable age group, and suffering from diabetes and high blood pressure.
“It is really because of the side effects that I don’t want to get vaccinated,” Zambrona said. “Because I keep hearing this news on TV, like some had blood clots in their brains.”
She said her husband feels the same, and they’d both rather take their chances with herbal remedies.
“We don’t get worried if we suddenly have that kind of symptoms,” Zambrona said. “In fact, they say it’s better to treat it with ginger, lemon, honey, that’s all we take.”
Marasigan said some Filipinos think they can’t catch the virus. 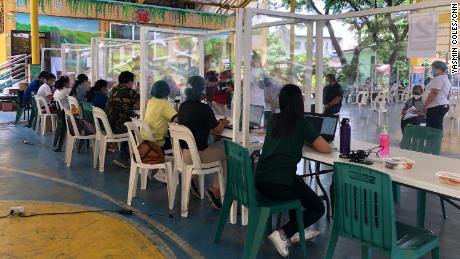 “When they are exposed to the elements, to pollution and everything, they think they’re immune,” he said.
Filipinos are not only enduring a pandemic, but the country’s worst economic slowdown since 1947. The economy shrank 9.5% in 2020, and contracted 4.2% in the first quarter this year.
For some, food is becoming unaffordable. A Social Weather Station (SWS) hunger survey in September 2020 showed 30.7% of Filipino families experienced hunger and 8.7% suffered severe hunger — the highest levels recorded in 20 years.
“The whole of the government is seeking ways and means to continue and sustain implementation of their various health and nutrition services while adapting to the new normal situation targeting to alleviate the most vulnerable from hunger and malnutrition,” said Jovita B. Raval, chief of the Nutrition Information and Education Division at the government’s National Nutrition Council. 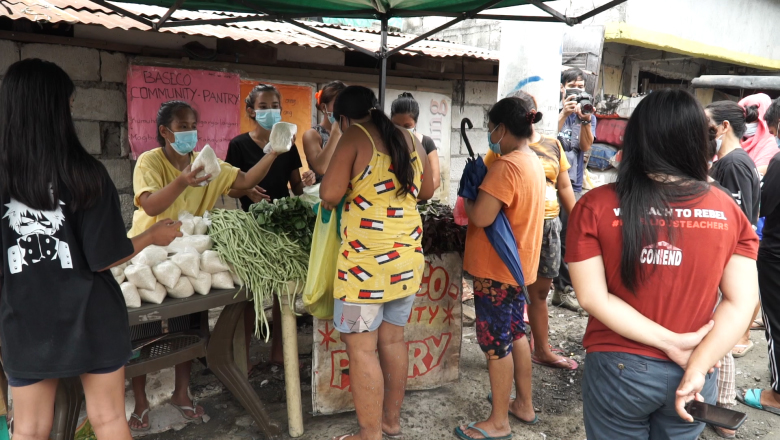 Hungry Filipinos are turning to community kitchens for meals.
Back in Baseco, Vito’s expenses have gone up with everyone staying at home. Most days, the family can only afford to share one bottle of water to drink between them. And online learning due to school closures means families have to pay up to $19 per month for internet access — a huge sum of money for those without income.
It often means a hard choice between lessons or food. “If we can’t put in the money, they can’t go to class,” Vito said.
“I would rather spend that money so that the children can have breakfast.”
Returning home after receiving her donation from the community kitchen — some green beans, rice and a few other vegetables — Vito knows she has to stretch a small amount of food a very long way.
For many of these families, the fear of coronavirus will never compare to the more acute daily threat of hunger.

With nine children and one grandchild, life was hard for Mona Liza Vito and her family even before the pandemic.

One of Costco’s secret weapons is coming back

Family of American imprisoned in Russia believes he was targeted over...

Changes in India’s rainfall could seriously impact more than a billion...

ISIS claims responsibility for attack on mine-clearing workers in Afghanistan

Inside a German vaccination center amid sluggish rollout

Japan’s birth rate fell to another record low in 2020