Political violence mars every election season here and the run up to the June 6 midterm elections has been no different. But this year has been particularly gruesome, even for a country more used to it than most.
At least 88 politicians or candidates for office have been killed since last September, according to Mexican consulting firm Etellekt Consultores.
They’re part of a group of at least 565 politicians or candidates that have been targeted by some sort of crime, according to the firm.
Mexico’s government says this year’s midterm elections will be the largest ever. By the time the polls close on June 6, they might also be its deadliest.
Read More

Abel Murrieta was handing out campaign flyers in broad daylight two weeks ago, along a busy street in Cajeme, the municipality where he was running for local office. The former prosecutor in the northern state of Sonora was with supporters when police say two men in a vehicle gunned him down, shooting him 10 times.
As a candidate, he consistently said fighting crime was his number one issue.
“Enough with the drugs that steal our kids and destroy our families. I’m a man of the law. I’ll lay down the law. My hand isn’t shaking. I am not afraid,” Murrieta said in his final campaign ad — recorded only one day before his murder.
Social media footage showed Murrieta lying motionless after the shooting in a bloodied white button-down shirt as a supporter waved his party’s flag nearby, one hand on her heaving chest. A second video shot later showed him being put on a stretcher and into an ambulance.
Authorities say he was deliberately targeted though they don’t know by whom. An investigation is underway.
Murietta was a high-profile figure, known for his outspoken views on crime. As a private lawyer, he was also representing the LeBaron family, a family with dual US-Mexico citizenship that lost nine of its members when they were murdered by suspected cartel members in late 2019.
On Tuesday, another aspiring candidate was gunned down during a campaign event. Alma Rosa Barragan was running for mayor in the city of Moroleon in the state of Guanajuato, one of the country’s most violent regions.
“If you’d like to accompany me, come so you can listen to my proposals, come so we can coexist for a moment. Together, we can do it better,” a cheerful Barragan said during a Facebook Live she broadcast just moments before her death.
The Guanajuato Attorney General’s office condemned the assassination, and an investigation is now underway. 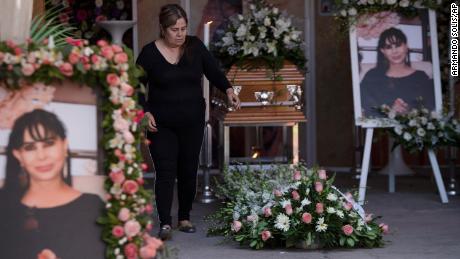 What’s behind the violence?

Motives behind the murders of so many candidates throughout the country are unclear, but suspected drivers are organized crime and the fight for territorial control.
Mexican security expert Ana Maria Salazar believes in many cases smaller criminal groups or larger drug cartels are targeting candidates they don’t like to boost their preferred candidate’s ascent to office. And for these groups and cartels, territorial control is key.
“There’s a lot of intimidation. It has to do with these organizations wanting to have a person [in office] that will clearly abide by their needs and that will allow them to control the territory,” Salazar said to CNN. “It has to do with territorial control.”
It’s also not unheard of for the politicians or candidates involved to be tied in with organized crime themselves.
These groups are either financing or promoting candidates — or threatening, intimidating and killing those they want out of the game, she added.
“These criminal organizations finally understood that having control over either the political parties or the political structures in your region actually allows you to use it to traffic and exercise territorial control much easier in the last three years since Andres Manuel Lopez Obrador was elected,” said Salazar.
Lopez Obrador has taken a different tack in combating organized crime since he took office, eschewing previous strategies of going to war with the cartels. He favors addressing the long-term root causes of poverty as a way to provide alternatives to cartel membership, commonly referred to as “hugs, not bullets.”
Salazar argues the strategy is partly to blame for the killings, as she says it allows criminal groups de facto free reign and a “right to exist.”
The Lopez Obrador administration has consistently said its strategy needs more time for results to be truly felt.

The government response — or lack thereof

Critics have said for decades that the federal government does not do enough to protect candidates and President Andres Manuel Lopez Obrador’s administration is no different.
“It’s a difficult time for these campaigns,” President Obrador said recently during his daily press conference. “We’re going to keep protecting them.
The words “keep protecting them” would imply that the government is already effectively protecting candidates, something that is obviously not the case.
Critics say the government’s ineffective response is in part due to not admitting the extent of the problem.
The government’s own tally of how many politicians or candidates have been killed, currently at just 14, is far lower than other estimates, including consulting firm Etellekt’s.
When asked about why his government’s figures were so much lower, the president would not disclose how his administration calculated their figures.
It doesn’t help that Mexico is a country where impunity reigns. Well over 90 percent of all crimes never get solved.
With less than two weeks until voters head to the polls, concerns about more killings of candidates will only grow.

Some parts of the campaign trail in Mexico look like anywhere else — rallies, bumper stickers, candidates making lofty promises. Other parts — the threats, the assaults, the murders — are more unique.

Vatican says it will not bless same-sex unions, calling them a...

Methodology and the opportunities for improvement

Dead puppies and kittens in crates reveal the dark side of...

More than 350 arrested at May Day protests in Berlin

WHO Africa encourages the use of AstraZeneca vaccine despite variants