This week, it emerged Beijing had secretly gifted Sierra Leone $55 million to fund a controversial “fishing harbor” on an undeveloped stretch of coastline, which supports the local fishing industry, borders protected rainforest, and is home to endangered turtles and pangolins.
The deal only came to light after residents were told by officials in the Whale Bay area, where the harbor is planned, that there was a hold on any land exchanges because of a Chinese deal, says Jane Aspden Gbandewa, who runs an an eco-tourism business in the area.
The rumor mill got busy. The Chinese were allegedly funding the sort of fish meal factory that has proliferated along the West African coast recently — businesses that are devastating to the local environment, gobbling up vast quantities of fish and spewing out toxic, odorous waste.
Beijing and Freetown were forced to deny the rumors but acknowledged a deal had been made — even if no details were forthcoming.
Read More
On Tuesday, Sierra Leone President Julius Maada Bio said the project was part of Beijing’s “international Belt and Road Initiative” and would support the local fisheries sector. All “environmental due diligence will be done,” he added.
Nevertheless, such moves don’t align well with President Xi Jinping’s calls to build an “ecological civilization” at home in China, and his determination to be a global leader on the climate crisis.
In a statement to CNN, a spokesperson for China’s Foreign Ministry said “a modern fishing pier” had been a “long-cherished wish” of the people of Sierra Leone since the 1970s.
The Foreign Ministry declined to clarify which Chinese bank or body was involved, when the funds had been exchanged — or if they were still in China — and the terms of the grant: such as whether a Chinese company will carry out the construction work. It simply said: “The ownership of the land and the port belongs to Sierra Leone.”
Expansion of Sierra Leone’s fishing industry, vital for its food security and export industry, could be a boon for the country, if done responsibly. Yet caginess around money only breeds suspicion — even if it is a common factor in many deals brokered by China. A study of Chinese loan contracts earlier this year revealed secrecy clauses are a staple of Belt and Road deals.
As Cobus van Staden, senior China-Africa researcher at South African Institute of International Affairs, wrote this week: “The result is that any Chinese deal, no matter how above-board, comes in for suspicion, already pre-tainted by the massive trust gap between national governments and local communities.”
“It’s no surprise that the ‘debt trap’ narrative has proven so durable in Africa,” Van Staden added. “Even as its specifics have been debunked many times, the story fits so neatly into the continent’s lived experience that it’ll likely never die.”

Uniqlo’s recent brush with United States border authorities is the latest example of the growing risks multinational companies face while operating in China.
US authorities blocked a shipment from the Japanese clothing retailer in January, citing concerns the shirts may have been produced through forced labor in the Chinese region of Xinjiang. Uniqlo denied the claim in a statement to CNN Business and said it was “disappointed” by the decision. (China has repeatedly denied human rights abuses in the region.)
Uniqlo was one of more than 80 companies the Australian Strategic Policy Institute has said was “directly or indirectly benefiting from the use of Uyghur workers outside Xinjiang through abusive labor transfer programs.”
But in its statement, Uniqlo said it sent documents to US customs officials “to demonstrate that our products meet US import requirements,” adding that all of its products “use only cotton that originates from sustainable sources.”
The clothing brand, which is owned by Japan’s Fast Retailing, faces a tricky balance in its messaging. In China, a key market for Uniqlo, brands like H&M have faced boycotts for expressing concerns over forced labor in Xinjiang. But if Uniqlo doesn’t take a forceful stance, it risks alienating consumers in other markets.
The reality for Japanese companies poses a unique challenge: Though the government is a key American ally, China is a neighbor and the biggest market for Japanese corporates.
Another Japanese clothing brand, Muji, has taken a different approach, saying it continues to use cotton from Xinjiang, and even advertising products made with “Xinjiang cotton.”
— By Selina Wang 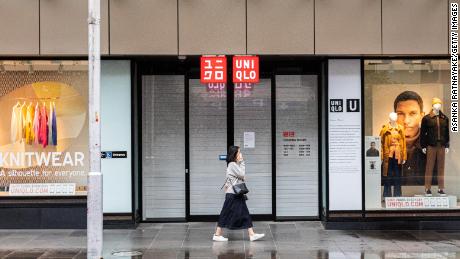 “We are appalled to see blatant anti-Semitism expressed in an official Chinese media outlet, we have hoped that the times of the ‘Jew’s controlling the world’ conspiracy theories were over, unfortunately anti-Semitism has shown its ugly face again.”
— Israel’s embassy in China called out a segment from state broadcaster CGTN which referred to Jews dominating “finance, media and internet sectors” in the United States and speculated that a Jewish lobby could influence Washington’s policy on Israel. The video has since been removed from all platforms.

Crypto miners in the crosshairs

Authorities in northern China are cracking down on cryptocurrency mining — and they want snitches.
The Inner Mongolia Development and Reform Commission announced Tuesday it has set up a telephone hotline and dedicated email address for the public to report any crypto-mining operations in the region, including those disguising themselves as data centers to enjoy preferential tax policies.
Crypto-mining creates digital coins by solving complex mathematical problems, a process that requires large amounts of computer processing power and consumes plenty of energy. As China’s second-largest coal producing region, Inner Mongolia’s cheap electricity made it a popular choice for miners. The region once accounted for about 8% of all Bitcoin mining globally, according to the Cambridge Center for Alternative Finance.
But the energy-consuming industry has come under increasing scrutiny from the Chinese government, which has vowed carbon emissions will peak by 2030 and hopes to achieve carbon neutrality by 2060. Earlier this year, Inner Mongolia pledged to shut down all cryptocurrency mining projects by the end of April.
In addition to crypto-mining, China has also restricted digital currencies more generally. This week, Chinese regulators banned financial institutions and payment companies from participating in transactions or providing services related to cryptocurrencies. The news sent Bitcoin’s value tumbling as much as 30% before recovering slightly.

Photo of the day 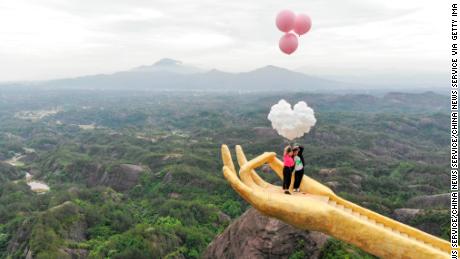 The things we do for love: A couple poses on a Buddha’s hand statue built on a cliff at the Shiniuzhai National Geological Park in China’s Hunan province. May 20 is celebrated as “I love you day” due to the date sounding like that phrase in Mandarin. Not everyone was happy on Thursday however — two local governments had to scrap plans to suspend divorces for the day after a public backlash.

Secretary of defense orders review of US airstrike that killed civilians...