This storm will be the first-named tropical cyclone of the year in the region. A natural disaster like this couldn’t have come at a worse time as India is currently the global epicenter of the coronavirus pandemic.
Weather forecast models have consistently predicted for days now the development of a tropical cyclone off India’s southwest coast. While there have been fluctuations in the details — where it would form, how quickly it would strengthen, where and when it would make landfall — models have unfortunately been consistent in predicting that this will turn into an intense cyclone by early next week.
Due to favorable conditions, the cyclone is expected to intensify rapidly after 24 hours and is forecast to reach a peak of 203 kph (127 mph), according to Friday morning’s forecast from the Joint Typhoon Warning Center.
Keep up with the latest on the cyclone here
The expected rapid intensification is due to nearly ideal environmental conditions. Sea surface temperatures in this region are some of the warmest in the world right now — about 30-32 degrees Celsius (86-90 degrees Fahrenheit). Tropical cyclones use warm water as fuel and anything over 26.5 degrees Celsius (80 degrees Fahrenheit) is enough to support their development. Additionally, low wind shear will help the cyclone make maximum use of these extremely warm waters. High wind shear tears tropical systems apart and limits their development.
While the most important details of the landfall location, timing, and intensity remain a mystery for now, there is certainty to some degree of impact for much of the west coast of India through the weekend and into Monday.
Read More
As the storm intensifies and begins its northward trek, it will be close enough to the coast to bring significant rainfall to areas like Kochi and Mangalore, even up to Mumbai — India’s financial capital and most populous city. Rainfall amounts will vary based on how close the storm gets as it moves generally parallel to the coast, but widespread amounts of 100 to 250 mm (4 to 10 inches) will be likely. 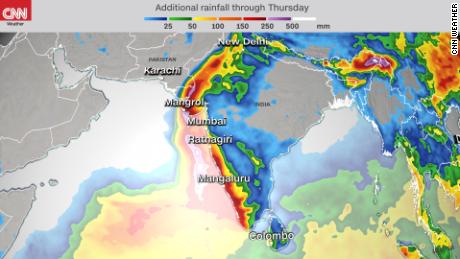 As the storm tracks north along the west coast of India, the flow of the storm on the south side will push rain onshore. This rainfall could certainly bring flooding to areas that are used to it as India’s monsoon season gets underway in a matter of weeks.
It appears likely that this storm will ultimately become the equivalent of a major hurricane (Category 3-5 on the Saffir-Simpson Hurricane Wind Scale). The general consensus among forecast models at this point is that the greatest risk for landfall is from Gujarat in northwest India to Karachi, Pakistan, between Monday night and Wednesday.
If the storm makes landfall at a strength equivalent to a major hurricane it will not only bring winds well over 100 mph and flooding rains, but incredibly rough seas and significant storm surge, which poses a deadly threat. Over the weekend, as the storm becomes better organized, forecast models and meteorologists should get a better idea of the exact impacts — timing, location and intensity.
May is not an unusual time to get tropical cyclones in the Northern Indian Ocean.
This region of the world has two distinct tropical cyclone seasons — April to June and October to November. This marks the months immediately before and after the southwest Indian monsoon season. During the monsoon season, upper-level winds are not favorable for tropical cyclone development.

A developing tropical cyclone over the Arabian Sea is forecast to strengthen significantly into named Cyclone Tauktae over the weekend and pose a potentially catastrophic threat to portions of India and Pakistan next week.