The mammoth mass of waste stretches to more than half a mile in length and weighs 330 tons, Seven Trent Water said in a statement.
They estimated that the fatberg may not be cleared until June.
“While the true extent of the blockage won’t be known until it is removed, it is likely to be one of the biggest blockages Severn Trent has ever dealt with,” the company said.
“It’s a massive project and it’s not resolved yet,” added Scott Burgin, operations manager at Severn Trent. “This giant mass is the result of everyone occasionally washing and flushing the wrong things down the drains, and not realising the impact that it’s having.”
Read More 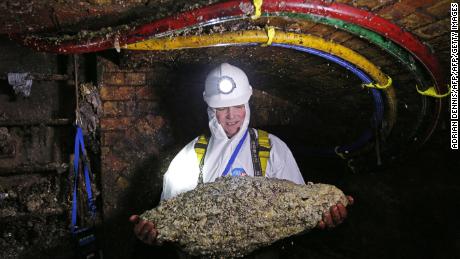 Massive London ‘fatberg’ to be turned into museum exhibit
Burgin blamed unflushable products like wipes, diapers and sanitary products being flushed in England’s second most-populous city.
And he issued some alliterative advice to residents of Birmingham: “Our advice is to always leave leftover cooking fat to cool, before disposing of it in the bin and to stick to only flushing the three P’s (pee, poo and toilet paper) and bin anything else.”
Fatbergs (the word is a portmanteau of fat and iceberg) form over time as items that can’t be broken down are flushed or washed down drains instead of disposed correctly.
A sewage sensor, which monitors for rising water levels, alerted the company to the Birmingham berg.
Thames Water, which operates the water system in London, says it spends GBP1 million a month, ($1.4 million), to clear blockages of this kind.
In 2018, a massive fatberg in the capital was turned into a museum exhibit.

A massive fatberg, weighing more than 300 tons, is clogging a sewer in an English city — and authorities say it is unlikely to move for weeks.

At least 22 Indian security personnel killed in clash with Maoist...

Osaka withdrawal news was like ‘a punch to the gut,’ says...

Laos records first Covid-19 related death over a year into the...

Myanmar military occupies hospitals and universities ahead of mass strike