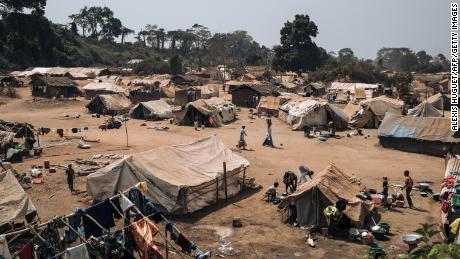 Democratic Republic of Congo has highest levels of hunger in world, UN says
“Whenever large groups of people are displaced in a short period of time, the dangers to children increase,” warned the UNICEF representative in the DRC, Edouard Beigbeder. “We must be alert to immediate risks for children on the move, including protection issues, nutrition and health risks, including waterborne disease and especially the spread of cholera.”
The UN agency added that nearly 700 of the 1,000 children that had been separated from their parents amid the chaos of Saturday’s eruption have now been identified, and that they were helping to reunite those children with their families.
The military governor also encouraged the provincial health and civil authorities to take charge of unaccompanied children on Friday.
Goma, the capital of North Kivu province, is situated at the edge of Lake Kivu on the DRC’s border with Rwanda. According to official projections from the UN, World Bank and others, the city is home to approximately 670,000 people — however a number of nongovernmental organizations in the region place the population closer to 1 million.
Compounding the current chaos are catastrophic levels of violence and hunger in the DRC that the Norwegian Refugee Council (NRC) says amount to “the world’s most neglected displacement crisis.”
Multiple conflicts in the central African country forced 2 million people to flee their homes in 2020, while there is also an acute lack of international aid and diplomatic attention, according a new report from the NRC.
“DR Congo is one of the worst humanitarian crises of the 21st century,” said NRC Secretary General Jan Egeland in a statement.
“A lethal combination of spiraling violence, record hunger levels and total neglect has ignited a mega-crisis that warrants a mega-response. But instead, millions of families on the brink of the abyss seem to be forgotten by the outside world and are left shut off from any support lifeline,” Egeland added.
The DRC has more than 27 million people, including over 3 million children, who do not have enough food to feed themselves — a third of the country’s population — and more than 5 million people who are internally displaced, according to NRC.

Around 400,000 people have fled the city of Goma and its surroundings in the Democratic Republic of the Congo (DRC), as the threat of another volcanic eruption at Mount Nyiragongo looms, a provincial government spokesperson said Friday.