The escalating unrest threatens to undermine the region’s fragile peace between pro-British loyalists who want to remain part of the United Kingdom, and pro-Irish nationalists who would like Northern Ireland to be part of the Republic of Ireland.

When did the most recent flareup begin?

On March 29, police officers were targeted in a petrol bomb attack in a predominately unionist area of Tullymore, in Derry/Londonderry, after an attempt to break up a crowd of approximately 40 people. For five nights, similar scenes unfolded in the city.
By Friday, April 2, the disorder spread to south Belfast, where a small protest descended into an attack on police in a loyalist pocket of the Sandy Row area, where 15 police officers were left with burns, head and leg injuries.
Read More
Belfast District Commander Chief Superintendent Simon Walls said that officers were “subjected to a sustained attack by rioters who have thrown a number of objects at police, including heavy masonry, metal rods, fireworks and manhole covers.”

Why is this happening?

The initial days of disorder came in the same week as authorities said they would not prosecute the leaders of nationalist party Sinn Fein for allegedly breaking coronavirus restrictions last summer when they attended a funeral for Bobby Storey, a former senior figure in the IRA, a paramilitary group who led a decades-long campaign for an independent and reunified Ireland.
Storey’s funeral drew crowds of around 2,000 people.
Loyalist communities have accused authorities of partisan hypocrisy around that decision, saying that they had taken the decision to cancel their traditional Twelfth of July parades last summer due to Covid-19 and had missed out on events and attending funerals of loved ones because they had adhered to those restrictions.
But many analysts also point to the recent and successful police crackdown on drug gangs and criminal activity supported and run by loyalist paramilitary forces. 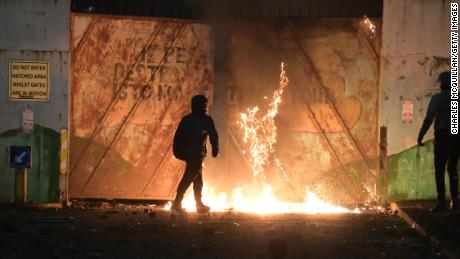 Most of the rioters are young people, with some participants as young as 12, according to the Police Service of Northern Ireland (PSNI).
The first days of the violence, which escalated over Easter weekend, took place in predominantly loyalist areas in the cities of Belfast and Derry/Londonderry and the towns of Newtownabbey, Ballymena and Carrickfergus.
But that dynamic changed on Wednesday in west Belfast, where rioters from loyalist and nationalist communities clashed along the so-called peace line — a gated wall separating predominately unionist and nationalist neighborhoods from one another.
At one point, police struggled to close a gate designed to separate the areas during the violence, where petrol bombs, bottles, masonry and fireworks were thrown.
At times there were upwards of 600 people present, police said.
Earlier on Wednesday, a bus was also hijacked and set alight on Lanark Way near the junction with Shankill Road, where a press photographer was also attacked.
In some videos of the disorder shared on social media, adults can be seen cheering and egging on children to undertake the violent acts, raising deep-seated concerns that the violence could be orchestrated by paramilitary groups.
Police are still attempting to confirm “whether or not paramilitary groups were involved” in the rioting, PSNI Temporary Assistant Chief Constable Jonathan Roberts said Thursday.
On Thursday evening, clashes continued on Springfield Road in Belfast, with protesters throwing stones at police vehicles on the nationalist side of the peace line. Officers in riot gear, with dogs and a water cannon, moved in to disperse those involved.
The South Belfast UPRG became the first loyalist group to call for an end to the disorder on Thursday. The Loyalist Communities Council (LCC), a group that includes representatives of unionist paramilitaries and which is also associated with the UPRG, said in a Friday statement that “none of their associated groups have been involved either directly or indirectly in the violence witnessed in recent days.” It added that “the right to peaceful protest is a fundamental human right” but that all actions taken by members of the loyalist community “should be entirely peaceful.”

What does Brexit have to do with this?

The riots are unfolding amid rising anger over a specific part of the Brexit agreement.
Tensions have been heightened in Northern Ireland ever since the United Kingdom voted to leave the European Union in 2016. But there is rising anger over a specific part of the Brexit withdrawal agreement called the Northern Ireland Protocol, which has been a key point of contention.
Throughout the Brexit negotiations, all parties widely agreed that any agreement would honor the Northern Ireland peace deal, known as the Good Friday Agreement (GFA), with UK Prime Minister Boris Johnson saying in 2019 that “we will under no circumstances have checks at or near the border in Northern Ireland. We will respect the peace process and the Good Friday Agreement.” 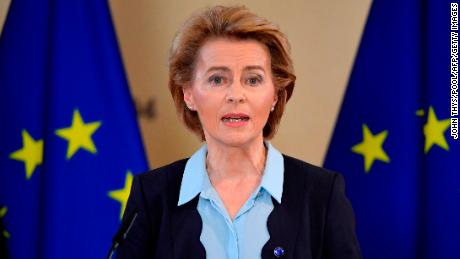 EU launches legal action against UK for breaching Brexit deal and international law
The GFA marked an end to the Troubles — a term used to describe the period of violent conflict in Northern Ireland that lasted from the late 1960s until its signing in 1998.
The peace accord also began the process of dismantling border controls between the North and the Republic of Ireland, and in 2006, the last watchtower was taken down.
But after the UK left the EU (and its single market), a new plan — the Northern Ireland (NI) Protocol — was implemented.
The NI Protocol aims to eliminate the need for border controls between Northern Ireland (part of the UK) and the Republic of Ireland (an EU member).
Instead, it creates a de facto border down the Irish Sea as goods entering Northern Ireland from Great Britain are subject to EU checks. The move which has angered pro-British Unionists, including Northern Ireland First Minister Arlene Foster and her party, the Democratic Unionist Party, who argue that the deal puts the future of the union at risk.
Northern Ireland Justice minister Naomi Long said on Wednesday that the UK government’s “dishonesty and the lack of clarity around these issues has contributed to a sense of anger in parts of our community,” saying that the government downplayed the impact that Brexit would have on Northern Ireland.
Long told the BBC’s Radio 4 Today program that the government knew that the consequences of Brexit would be “felt most acutely in Northern Ireland, where identity issues are tied up with border issues.”
Last month, the Loyalist Communities Council said it was withdrawing its support for the Good Friday Agreement, also known as the Belfast Agreement.

What are political leaders saying?

After multiple consecutive days of disorder, British Prime Minister Johnson said on Wednesday that he was “deeply concerned by the scenes of violence” In Northern Ireland.
Irish Taoiseach Micheal Martin, who spoke with Johnson later that day, said that “the way forward is through dialogue and working the institutions of the Good Friday Agreement,” which brought decades of deadly sectarian violence across Ireland to an end.
On Thursday, the White House joined Northern Irish, British and Irish leaders to express concern over the violence, with State Department spokesperson Ned Price warning that the Good Friday Agreement must not “become a casualty of Brexit.”
Long, the Northern Irish justice minister, has called on people to “stop, before lives are lost.”
At an emergency meeting of Northern Ireland’s government on Thursday, First Minister Arlene Foster said the violence has tarnished the country’s reputation in its centenary year.
“We should all know well that when politics fail or are perceived to be failing in Northern Ireland, then those who fill the vacuum offer destruction and despair. We cannot allow a new generation of our young people to fall victim to that path or be preyed upon by someone who prefers the shadows, to the light,” Foster told the Northern Irish Assembly.

Both communities are appealing for calm. However, it is not clear if that call will be heard.
On Friday, loyalist groups called off unauthorized band parades which had been planned over the weekend, as a mark of respect to Prince Philip, who passed away on Friday.
Saturday marks the 23rd anniversary of the signing of the Good Friday Agreement.

For over a week, riots have marred the streets across five cities and towns in Northern Ireland. Cars and a bus have been hijacked and burned, young people have thrown petrol bombs at police, and at least 74 officers have been injured.