Sign in
Sign in
Password recovery
Recover your password
Just For Reads Reading books
Share
Facebook
Twitter
Pinterest
WhatsApp
The product is one of Nestle’s newest plant-based inventions, and it will be launched in the region this week, the company told CNN Business. Starting Thursday, the drink will hit supermarkets in Malaysia, and the Swiss multinational plans to sell it in other countries soon. (The company already offers plant-based Milo in Australia and New Zealand, but in the traditional powder form.)
“We are all about giving choices,” Juan Aranols, Nestle’s Malaysia and Singapore chief, said in an interview. “We felt that with this growing interest for plant-based products, why not give the Milo taste everybody loves in a solution that is plant-based?”
Traditionally, Milo is made of cocoa, malt extract and skimmed milk, while the plant-based version swaps out milk powder for soy and oats. The move is the latest example of businesses taking the plant-based trend to Asia.
In recent years, Western brands including Nestle (NSRGY), Impossible and Beyond Meat (BYND) have tapped into a growing appetite for such food and drinks in the West. Now, they’re headed east, raising fresh funding to target growth in the region, rolling out products specifically created for Asian consumers and setting up new factories on the ground.
Read More 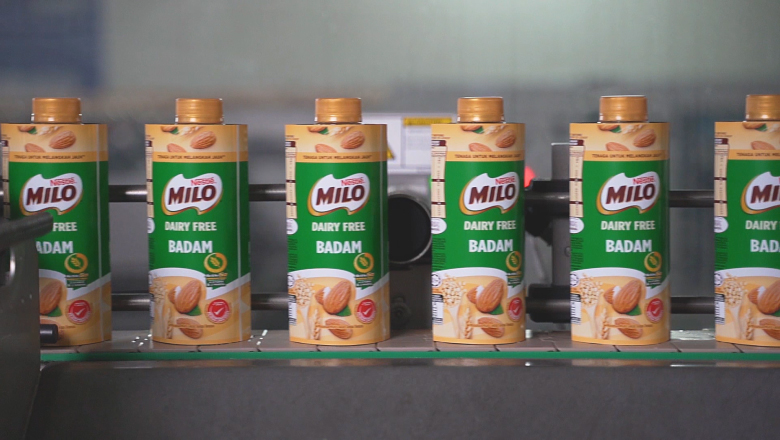 Nestle’s new plant-based, ready-to-drink Milo in production on a manufacturing line. The beverage will launch this week in Malaysia. Credit: Nestle
Plant-based food is already popular in parts of Asia but its gaining new fans for a variety of reasons, from customers wanting to adopt a healthier diet, to concerns about the impact of meat on the environment.
Some consumers simply want in on a hot new trend, while many younger meat-eaters want to become “flexitarians” — people who choose to forgo meat one or two days a week. For food and beverage companies, this translates into a $25 billion plus opportunity in the region.
“The tide is turning,” declared David Yeung, the founder of Green Monday, one of the few widely recognized homegrown players in Asia. The Hong Kong-based startup uses shiitake mushrooms, peas, soy and rice to make its “OmniPork” product.
“Finally, the whole concept of alternative protein, alternative dairy is becoming more mainstream,” he told CNN Business.

When Yeung started his business in 2012, many Asians believed a vegetarian diet meant eating “salad, or just tofu, tofu, tofu,” he said.
“As recent as three years ago, when we used to pitch this to supermarkets, they were like, ‘This is not going to sell. What is this?’ There was no track record,” he said. “Now people say, ‘Oh, plant-based is so prevalent in Hong Kong.'”
Walk into a Starbucks (SBUX) in mainland China and chances are you’ll see Green Monday’s OmniPork or its US partner, Beyond Meat, on the menu. The Hong Kong upstart has raised over $100 million to date, from investors including celebrities such as James Cameron and Bono. 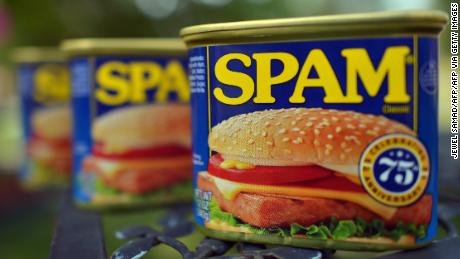 Derided in the West, spam is so beloved in Asia that one company has invented a meat-free version of it
Beyond Meat has also made a splash by teaming up with other players in China, including Alibaba (BABA) and Yum China (YUMC), the local owner of KFC, Taco Bell and Pizza Hut, while unveiling a meatless minced “pork” designed just for Chinese consumers. On Wednesday, it marked another milestone with the opening of a new manufacturing facility near Shanghai.
Beyond Meat isn’t the only company tailoring its approach to the local market. Last year, Nestle set up its first factory for plant-based products in Asia, as part of a 730 million yuan ($111.5 million) investment. The facility, which is located in the Chinese port city of Tianjin, has since launched a line of meatless burgers, sausages and nuggets, as well as its own twist on Chinese specialties, such as kung pao chicken, pork belly and braised meatballs.
In Hong Kong and Singapore, Impossible says it has doubled the number of restaurants that sell its products, even during the coronavirus pandemic. The California-based firm raised half a billion dollars last year, mostly from heavyweight investors in Asia.
Data points to a steady climb in regional demand over the last few years. As of 2020, the industries for meat and milk substitutes in Asia Pacific were worth a combined $25.6 billion, up from $21.5 billion five years prior, according to market research provider Euromonitor International.
The Singaporean government has also seized on the trend, giving companies further incentive. “We see the growing demand for alternative protein … as an opportunity that would enhance the world’s food security,” according to Johnny Teo, executive director for food, healthcare and biomedical at Enterprise Singapore, an official agency focused on business development in the city-state. 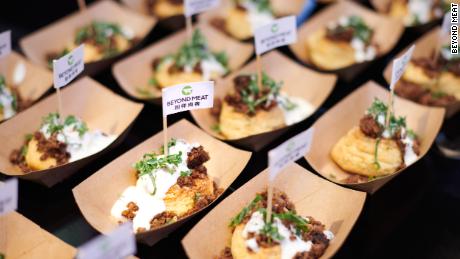 Beyond Meat launches plant-based minced pork in China
To that end, the government is taking steps to drive growth in the space by investing in startups and committing at least 144 million Singapore dollars ($107 million) to areas including alternative protein, he wrote in a blog post last year.
China, too, has set goals to cut down its meat consumption. In 2016, the Chinese Nutrition Society published dietary guidelines that suggested people eat 40 to 75 grams of meat per day, slightly less than the 50 to 75 grams of recommended daily consumption in 2007. The guidelines are released by the group — which is affiliated with but not run by the government — once every decade.
“There’s been a revolution in this sector,” Impossible Foods President Dennis Woodside said in an interview with CNN Business. “We’re seeing that play out in Asia — across Asia — in particular.”

But success in the fast-growing region may not come easy. Competition is fierce, and in some cases, companies have run into regulatory roadblocks.
Impossible, the most prominent example, is still awaiting a green light to operate in mainland China, where it’s been hoping to launch since at least 2019. Regulators have been scrutinizing its star ingredient, “heme,” an iron-containing molecule that is sourced from genetically modified yeast and is pretty much “what makes meat taste like meat,” according to the company.
Woodside admitted that the uncertainty had become a challenge, but said “we trust that the outcome will be positive.” The company is working closely with the regulators, and is recruiting a general manager for China, he added. It’s also in late-stage discussions to launch in Thailand, and has recently obtained approval to start doing business in Australia and New Zealand.
Popular meat alternatives have existed for generations in Asia’s biggest nations. India, for example, has a predominantly vegetarian population and vibrant food culture. And in China, people have crafted their own fake meat dishes from mushrooms, nuts and vegetables for centuries. 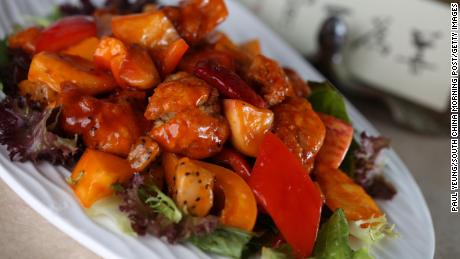 China perfected fake meat centuries before the Impossible Burger
Executives say they aren’t trying to compete with those offerings; just hoping to give people more options.
“We always like to say we’re a third-generation product,” said Blair Crichton, the co-founder of Karana, a Singapore-based startup, which sells imitation pork made from jackfruit.
Crichton noted that there has already been “a lot of innovation in Asia and some amazing product.” His company aims to pay homage to that by experimenting further with regional ingredients and serving up plant-based comfort food, such as dumplings and buns, or “baos.”
Nestle, the world’s biggest food company, is trying a different tack. Part of the Swiss giant’s plan is to tap into the love for its legacy brands, launching plant-based versions of everything from Nescafe lattes in Japan to Nesquik in the United States.
“We’ve got the geographical reach, and we’ve got the distribution capability both in home and out of home,” said Chris Johnson, Nestle’s CEO of Asia, Oceania and sub-Saharan Africa. “Those are things that Nestle brings to the party that makes me feel confident.” 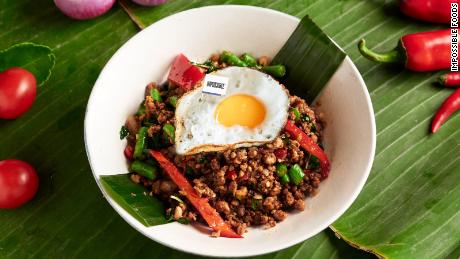 Johnson, who has been with Nestle since the 1980s, said that the company has evolved internally as it races to go big in the plant-based space. “I’ve never seen the sort of speed of innovation, in other words, going from idea to launch … as quickly as we have [on this],” he said.
It took just nine months, for example, for researchers to introduce and roll out a plant-based tuna alternative in Switzerland. And in some ways, the company is taking a chance in Asia, according to the executive.
“We used to be very careful before we’d make … investments to produce things,” Johnson said. “But we actually have invested ahead of demand, in the case of China and Malaysia. So we’re placing some big bets out there.”
— CNN’s Shawn Deng contributed to this report.

Milo chocolate milk has been hugely popular in Southeast Asia for decades. Now the breakfast and teatime favorite is about to get shaken up — the cocoa powder will be offered as a dairy-free, ready-made beverage.