Facebook (FB) announced several new tools for creating and sharing audio on Monday. Similar to its moves into video behind YouTube, disappearing photos after Snapchat and short-form content on the heels of TikTok, Facebook is once again following the growth of a new medium and competitor. Audio has seen a resurgence with the rise of podcasts and more recently with live social audio on Clubhouse and Twitter Spaces.
Facebook wants to “treat audio as a first-class medium in the way that we treat photos and videos,” CEO Mark Zuckerberg said Monday in an interview with journalist Casey Newton on another group-chatting platform, Discord. 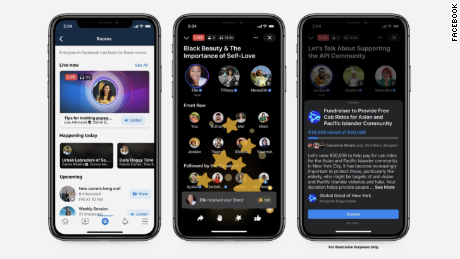 Facebook is working on its own live audio product, called Live Audio Rooms, and will test it in Facebook Groups. The company plans to make the feature available to everyone on Facebook this summer and incorporate it in its messaging app, Messenger. Reddit also announced its own Clubhouse-like product on Monday.
Podcasts are also coming to Facebook. People will soon be able to listen to and discover new podcasts directly on the Facebook app, as they already can on alternative platforms like Spotify (SPOT) and Apple’s podcast app.
Read More
Another new product is called “Soundbites. They are audio clips that are short-form like TikTok videos but are instead audio-focused with captions. The feature will first be available to a select number of creators, including comedian Drew Lynch and motivational speaker Molly Burke. 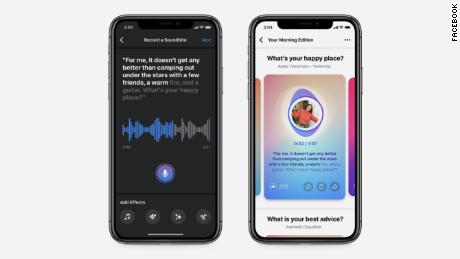 Facebook also announced plans for creators to be able to make money with these new audio tools. This would include charging for access to Live Audio Rooms and using Facebook Stars, its tipping feature. The company is also launching an Audio Creator Fund to support those using its Soundbites feature.
Zuckerberg said Monday that he likes audio since theoretically people can more easily consume it while multitasking and also because the production is “more accessible.”
“A big part of the creator economy is that it’s empowering individuals,” Zuckerberg said. “I think that’s a positive trend in the world.”

Forget mindlessly scrolling through the news feed: The future of Facebook could be closing your eyes and simply listening.