“The Ethiopian government has indicated its open will for independent investigations to be undertaken in the Tigray region,” the office of Prime Minister Abiy Ahmed told CNN in a statement Friday.
The statement added: “Social media posts and claims cannot be taken as evidence, regardless of whether Western media report it or not. Hence why investigations into allegations are welcome for remedial action and accountability. Resultantly the Ethiopian Human Rights Commission together with the UN Office for the High Commissioner of Human Rights are already in the pipeline to carry out investigations.” 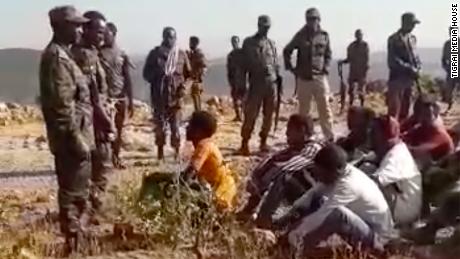 ‘Two bullets is enough’: Analysis of Tigray massacre video raises questions for Ethiopian Army
A CNN investigation, carried out with Amnesty International and published Thursday, verified footage of soldiers executing a group of at least 11 unarmed men before disposing of their bodies near the Tigrayan town of Mahibere Dego.
The Ethiopian government did not respond to CNN’s request for comment until after the investigation was published and broadcast.
Read More
A BBC-led investigation also published Thursday corroborated the same massacre near Mahibere Dego.
The Mahibere Dego execution was not an isolated incident, with CNN’s investigation revealing that a number of mass killings have been reported over the course of the five-month-old conflict.
A previous CNN investigation compiled eyewitness testimonies claiming that soldiers from neighboring Eritrea had crossed the border and were carrying out massacres, extrajudicial killings and deploying rape and sexual violence as a weapon.

Video by Barbara Arvanitidis and Mark Baron. Emmet Lyons contributed to this report.