For every degree Celsius of global warming, monsoon rainfalls will likely increase by 5%, according to one of the key points of the analysis.
While more rain might seem like a good thing, too much (or too little) can harm crops. India depends on this seasonal rainfall to help sustain the crops necessary to feed the second-most populated country in the world. However, the authors suggest climate change will negatively effect their agriculture if left unabated. 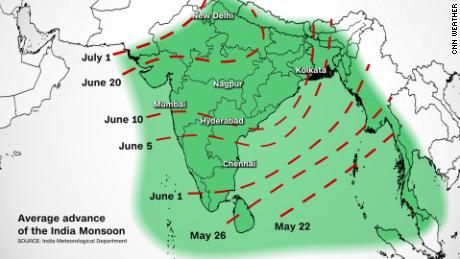 It’s not just an increase in monsoon rainfall this study suggests could be impactful — it is the variability.
This includes more prolonged dry spells where rainfall is needed most.
Read More

A more ‘chaotic’ and’ ‘erratic’ future lies ahead

India’s agriculture sector encompasses nearly 20% of its annual GDP and plays a “crucial role” in the countries well-being, according to the report. If climate change is left unchecked, residents should expect more “chaotic” monsoon seasons, which could negatively impact farming, according to climate scientist Anders Levermann, one of the lead authors of the study.
Rice, for example, a major source of sustenance across the Indian subcontinent, is highly susceptible to changes in rainfall. Crops need the precipitation, especially during the initial growing period. But too little or too much at once can harm the plants. 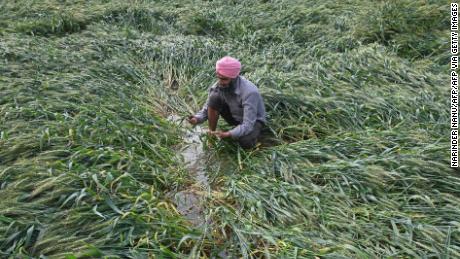 This is called climate variability and its unpredictability is what has experts concerned.
“The problem with increased variability is, however, the reduced predictability, which makes it harder for farmers to deal with the monsoon,” Levermann, who is affiliated with the Potsdam Institute, tells CNN.
Like clockwork, every June thru September, farmers throughout India anticipate the beginning and end of the yearly rains, also known as the Southwest Monsoon. Frequently during this period, reports of flooding inundate international news outlets as heavy precipitation falls erratically, overwhelming the flood management systems in place.
Agriculture policy expert Devinder Sharma told CNN that farming practices will need to adapt to this climate variability, but exactly how remains unknown.
“We don’t know how climate change will work out. It could be heavy rain at one point, followed by drought or cyclones. It won’t be uniform. This will create a lot of problems for the agriculture sector and as well as for the economy.”

Wednesday’s study from PIK confirms that human behavior, such as the burning of fossil fuels, is a major contributor of heat trapping greenhouse gases, even overtaking the slow natural changes seen across thousands of years.
“Under unabated climate change, the CO2 effect is by far the strongest effect and will dominate the change in monsoon over all natural and other human-made effects,” says Levermann.
Despite reductions in pollution levels during worldwide Covid-19 lockdowns, heat-trapping greenhouse gases continue to surge to new record highs.

Global warming is increasing the variability of India’s monsoon rains faster than previously projected, according to a recent study from the Potsdam Institute for Climate Impact Research (PIK).