“The end is definitely in sight but we’re not there yet. This third wave is more serious and we need to hang in there for another few weeks to make sure that we can flatten that curve, drop those numbers down again, to give a chance for vaccines to take hold,” said Canadian Prime Minister Justin Trudeau during a press conference in Ottawa Friday. 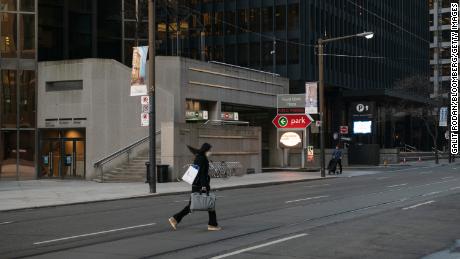 Ontario issues stay-at-home order to 14 million residents as Covid-19 hospitalizations spike
The situation is most serious in Ontario, Canada’s most populous province, where officials say the province is close to its ‘worst case scenario’ projections for the third wave. The province came dangerously close on Friday to shattering a record for a single day increase in cases and has already set a record this week for intensive care unit admissions related to Covid-19.
“We’re seeing more and more young people being admitted to hospital with Covid-19. So to young people: There are more contagious and more serious variants out there, even if you’re younger, you can get sick very, very quickly,” Trudeau said.
Across the country, Canadian health officials say ICU admissions are up more than 20% in the last week alone as all of Canada’s most populous provinces cope with a third wave more threatening to the health care system than the last two.
Read More
“I can understand the frustration, the anxiety, the concern that Canadians right across the country are feeling in seeing these numbers rise, I share it. I think we’re all recognizing that we don’t want to be in this third wave but we’re here,” Trudeau said.

Vaccine rollout will not slow new growth in cases

Although Canada broke a record this week for vaccine doses administered, Dr. Theresa Tam, Canada’s chief public health officer, says the vaccine rollout will not slow the rapid growth in cases as more contagious variants spread throughout the country.
“Right now my concern is … the ICUs filling up, not just hospitalizations, because there is an absolute limit to ICU capacity, not necessarily because of equipment, but because of people,” Tam said during Friday’s press conference. 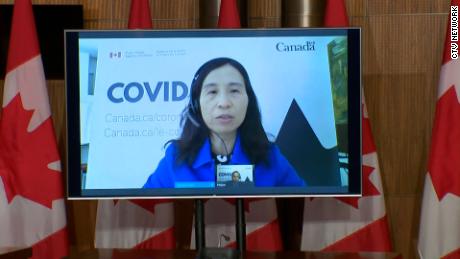 Covid-19 variants have likely replaced original virus in many parts of Canada, health officials say
The province of Ontario, including Canada’s most populous city, Toronto, imposed a provincewide stay-at-home order for at least four weeks beginning Thursday as the third wave threatens to overwhelm hospitals. However, restrictions have only moderately decreased new infections despite the fact that cities like Toronto have been in some form of lockdown since late November.
Ontario Premier Doug Ford imposed the province’s third state of emergency since the pandemic began. Nonessential retail stores including malls will close to in-person shopping with only grocery stores, pharmacies and garden centers open to the public.
Restaurant dining rooms, personal care services, and gyms were already closed across the province as last week province official shut down many places but stopped short of a stay-at-home order.
Toronto and the adjacent region of Peel moved students to virtual learning earlier this week just ahead of a previously scheduled spring break. The Ford government says its priority is to keep schools open throughout the province.
Outside of Canada’s Atlantic provinces, the third wave of the pandemic is straining hospitals throughout most of the country.
In a statement released Wednesday, Tam underscored the threat of variants spreading and leading to more infections and severe illness, especially among younger Canadians.
“While COVID-19 continues to impact people of all ages in Canada, infection rates are highest among those aged 20 to 39 years of age. As well, we are seeing an increased number of adults, under the age of 60 years being treated for COVID-19 in hospital, including in intensive care units,” Tam said.

Canada’s third wave of the pandemic is now more serious than the previous two, as hospitalizations and critical care admissions spike and the vaccine rollout is unlikely to change things over the next few weeks.