In a video of the awkward moment in Ankara, von der Leyen seems unsure of where to sit, gestures with her right hand and says “ehm” as Erdogan and European Council President Charles Michel take their seats.
Von der Leyen was eventually offered a seat on a nearby sofa, opposite Turkish Foreign Minister Mevlut Cavusoglu, who occupies a lower-status rank in diplomatic protocol.
In previous meetings the three presidents have all sat together.
Eric Mamer, chief spokesperson for the European Commission, said von der Leyen “was clearly surprised and that is something which you can see from the video.” He added that “it’s difficult to judge the reasons why she was offered one type of seat rather than another, that’s something which you’d have to ask the Turkish authorities about.”
Read More
Mamer said Turkey had been responsible for organizing the meeting. 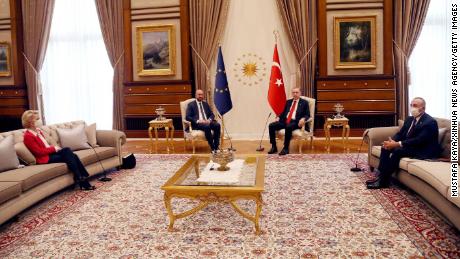 He added that when it comes to “the view of the Commission abroad, what I can say is that the protocol level of our President is exactly the same as that of the President of the European Council. Our President is a member of the European Council in her own right and generally, normally, when she goes to foreign countries, she is treated in exactly the same way as the President of the European Council would be.”
As leader of the European Commission, the European Union’s executive branch and most powerful institution, von der Leyen is one of the most influential women in the bloc. She previously served as Germany’s defense minister.
The diplomatic hiccup is especially uncomfortable considering the EU’s recent condemnation of Turkey’s withdrawal from the Istanbul Convention, an international treaty aimed at preventing violence against women.
CNN has reached out to both to the EU Council and the Turkish Presidency for comment.

Turkish leader Recep Tayyip Erdogan’s meeting on Tuesday with the European Union’s two presidents has raised eyebrows after European Commission President Ursula von der Leyen appeared to be left standing while her male counterparts settled into two gilded chairs at the focal point of the room.