London (CNN) — Why does Britain have a monarchy? It’s a question as old as the institution itself. But an even bigger one is why countries, beyond the UK, have the same monarchy.
The Queen is head of state in 15 other countries that were formerly under British rule, stretching as far as Australia and New Zealand — literally on the other side of the planet.
Due to her age, Her Majesty hasn’t traveled to these countries for years, which makes it even more remarkable that she has retained her positions there. More recently, senior royals such as her son, Prince Edward, and grandchildren, the Sussexes and Cambridges, have visited on her behalf.
So how does she keep the relationships strong? Well, she demonstrated that this week with a fleeting yet symbolic visit down the road from Windsor Castle.
Read More
The 94-year-old visited the Air Forces Memorial at Runnymede on Wednesday to mark the centenary of the Royal Australian Air Force. The surprise appearance by the monarch was her first in-person public engagement this year. 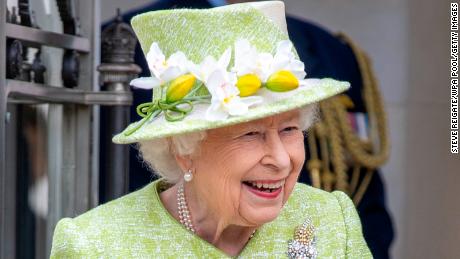 NEWS OF THE WEEK

Diana’s legacy to be honored in London
The late Princess of Wales is getting one of London’s famous blue plaques later this year. The sign will be placed outside Coleherne Court, her old apartment building in Earl’s Court, west London, where she lived with girlfriends before marrying Prince Charles. Diana’s brother, Charles Spencer, thanked English Heritage — the charity that oversees historic buildings and the commemorative plaque project — saying it was “such a very happy place” for his sister. The tribute will no doubt be special to her family as Diana is being recognized in the year in which she would have celebrated her 60th birthday. 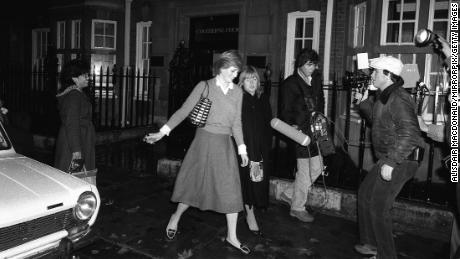 Archbishop gives more insight on Meghan and Harry’s wedding
The Duke and Duchess of Sussex were legally married at their televised wedding, Archbishop of Canterbury Justin Welby confirmed this week. His remarks shed more light on a comment made by Meghan in the recent Oprah interview, where she mentioned a backyard wedding in the days before the big event on May 19, 2018. “The legal wedding was on the Saturday. I signed the wedding certificate, which is a legal document, and I would have committed a serious criminal offense if I had signed it knowing it was false,” Welby said in remarks reported by Italian newspaper La Repubblica and confirmed to CNN by Lambeth Palace. “So, you can make what you like of that. But the legal wedding was on the Saturday, but I won’t say what happened at any earlier meetings,” the archbishop added.
The royals also had lockdown projects
Whether it’s baking, redecorating or learning a new skill, many have found new projects to take advantage of the endless hours indoors — including the Duchess of Cambridge. Catherine has spent the last year working on her own passion project — combining her love of photography with community outreach. Last year, she invited people across the UK to submit portraits they had taken during the first national lockdown as part of her “Hold Still” initiative. With the help of the National Portrait Gallery, 31,000 submissions have been whittled down to 100, which will be published in a new book in May, it was announced this week. The duchess wrote in the book’s introduction that she “wanted to use the power of photography to create a lasting record of what we were all experiencing — to capture individuals’ stories and document significant moments for families and communities as we lived through the pandemic.”

FROM THE ROYAL VAULT

The Queen has revealed her sadness over having to cancel the traditional Royal Maundy service for the second year in a row due to the pandemic. As “Defender of the Faith and Supreme Governor of the Church of England,” the Queen ordinarily marks the Holy Week with a service held on the Thursday before Easter Sunday.
This year’s event was supposed to be held at Westminster Abbey in London. Instead, the monarch sent out gifts to the 190 people who would have been invited this week.
“I am sure you will be sad, as I am, that present circumstances make it impossible for that Service to take place. I hope however that this Maundy Gift will remind you for years to come that your efforts have been truly appreciated,” the Queen wrote in a letter to each recipient.
The Royal Maundy service is an ancient ceremony that dates back to 600 AD and, for Christians, remembers how Jesus washed the feet of disciples at the Last Supper. The Queen observes Maundy by offering gifts to senior citizens put forward by local clergy of all denominations in recognition of their service to the church and to the local community.
During the Queen’s reign, she extended the ritual of Maundy money beyond London and has traveled to different cathedrals and abbeys across the United Kingdom to distribute the symbolic gifts. As part of the service, Elizabeth hands out two leather purses which have been blessed: One red and one white. 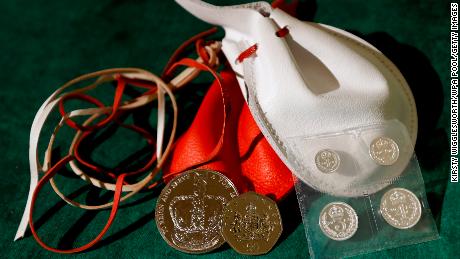 The red pouch this year includes two newly minted coins: A GBP5 coin in honor of the Queen’s upcoming 95th birthday as well as a 50p piece that marks the 50th anniversary of decimalization of the currency. Historically, the amount of GBP5.50 represents the sovereign’s gift for food and clothing.
The white purse holds bespoke Maundy money minted for the occasion in denominations of one, two, three and four silver penny pieces, which add up to her age.
Customarily, the Queen celebrates Easter weekend privately with her family at Windsor Castle — where she has been holed up with her husband, Philip, and a bubble of their staff since the virus struck last year.
We usually get a glimpse of the monarch as she attends church on Sunday morning at St. George’s Chapel — the beautiful chapel that was constructed in the late 15th century and is still the scene of many royal baptisms, weddings and burials — accompanied by some members of the clan. But the traditional family gathering is unlikely to happen this year, with Covid-19 restrictions preventing more than six people or two households meeting up. 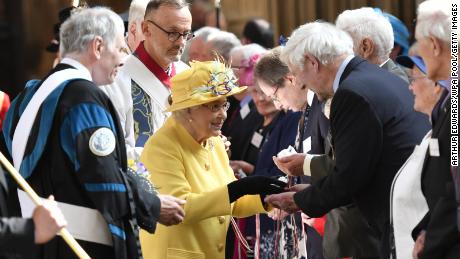 The Queen may opt to worship privately — which she does at the Chapel of All Saints, near Prince Andrew’s Royal Lodge home in Windsor Great Park — but she will certainly forego the usual trip to St. George’s to avoid drawing any crowds.
In lieu of public appearances, it’s possible we may still hear from a member of the royal family. Prince Charles has often recorded special Easter messages to mark the holiday, including participating in the “Abbeycast” podcast last year and sending a supportive video message to people persecuted for their faith in 2018.

A WORD FROM THE ROYALS

“How much we’ve missed it and how much we’re looking forward to being able to have that collective experience again.”

The pandemic has forced the arts to explore the digital realm like never before. And while the online landscape has allowed global theater to present some virtual offerings, many fans — including the 57-year-old Earl of Wessex — are looking forward to the day they can return to playhouses.

A version of this story appeared in the April 2 edition of CNN’s Royal News, a new weekly dispatch bringing you the inside track on the royal family, what they are up to in public and what’s happening behind palace walls. Sign up here.