Speaking to CNN Sport contributor Darren Lewis, Ceferin did not hold back on the proposals which threaten to rock the foundations of the sport but was confident the new league would not be a success.
“Because we [UEFA] respect the fans, the traditions, football, the football community, our society, we will win. In the end, we will win,” Ceferin says.
“If 12 people want to meet to take football hostage, just to fill their pockets that are already so full that it’s hard to put anything in, they can’t win. Long term, they can’t win.”
In a joint announcement Sunday, six English clubs — Arsenal, Chelsea, Liverpool, Manchester City, Manchester United, and Tottenham Hotspur — alongside three teams from Italy — AC Milan, Inter Milan and Juventus — and three from Spain — Atletico Madrid, Barcelona and Real Madrid — laid out plans to form a breakaway competition.
Read More
The announcement has resulted in widespread condemnation, with fans, players and politicians all criticizing the founding members for prioritizing financial gain and creating a closed shop for the richest clubs.
“I’m proud and happy that fans respect football, that they love football, that they respect history and they’re not for sale,” Ceferin added.
“Fans are not for sale and football players as well. And I hope they will raise their voice and stop this nonsense of a project that would kill football not only in the UK, but in all Europe.”
Ceferin says he had previously been reassured by both Juventus and Manchester United that neither club would sign up to the new structure and was left surprised by the news.
He was particularly frustrated with Juventus chairman Andrea Agnelli, who he said had been ignoring his calls since the rumors of the major announcement were circulating.
“I thought we are also friends, but I was wrong. For me, it’s always better to be naive than to lie all the time,” Ceferin said, previously referring to those involved as “snakes.”
“Their chairman approved something and then ran away, and he’s still hiding probably somewhere, I don’t know where he is.”
Juventus did not want to comment on Ceferin’s latest comments.
The president of European football’s governing body had reiterated in a press conference Monday that any players involved in the proposed breakaway will be banned from the World Cup and European Championships.
He confirmed UEFA would be taking legal advice as soon as possible in relation to this year’s Champions League semifinals, which features three teams currently signed up to the new Super League.
UEFA on Monday voted to approve new plans for an expanded and restructured Champions League to kick-in from the 2024-25 season.
The total number of teams participating will increase from 32 to 36 with the traditional group stage being remodeled into a single league stage. There had been hopes the new format would hold off the new Super League.
“I was a criminal lawyer for years and I’ve met many tricky people that I’ve represented but I’ve never seen something like that. Ethics doesn’t exist in the group,” Ceferin added.
“It’s hard for me to call it Super League because it’s all but super.”
LIVE UPDATES: European Super League intent on shaking up ‘beautiful game’ 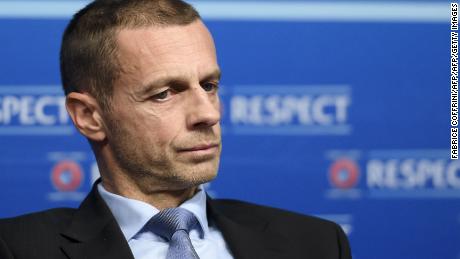 The breakaway group hopes to add three additional founders before the inaugural season, which is “intended to commence as soon as is practiceable,” according to the announcement posted on the 12 clubs’ websites.
The league is ultimately expected to consist of 20 teams and be governed by the founding clubs themselves. There would be no promotion of relegation from the league, with only five qualification places available each year.
The new structure would all but end competition at the highest level and would make it almost impossible for smaller teams to break into Europe’s elite, shattering the sport’s long-standing ethos.
Rumors of a proposed Super League have been circulating for years with the game’s most recognized clubs keen to have more control over TV deals and financial rewards.
However, Joel Glazer, co-chairman of Manchester United and vice-chairman of the proposed Super League, insists the plans would help the wider game.
“By bringing together the world’s greatest clubs and players to play each other throughout the season, the Super League will open a new chapter for European football, ensuring world-class competition and facilities, and increased financial support for the wider football pyramid,” he said in a statement.
American investment bank JP Morgan confirmed to CNN on Monday that it will be financing the proposed tournament, underlining yet again the importance of money to those seemingly running the modern game. 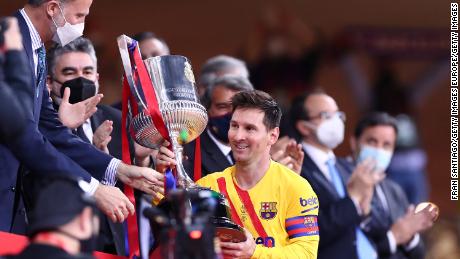 FIFA, the global governing body for football, denounced the formation of the Super League, saying it goes against FIFA’s core principles of solidarity, inclusivity, integrity and equitable financial redistribution.
“FIFA can only express its disapproval to a ‘closed European breakaway league’ outside of the international football structures and not respecting the aforementioned principles,” FIFA said in a statement.
In a statement issued in January, after rumors of the new Super League began circulating, FIFA said that it would not recognize the breakaway organization and went so far as to say that “any club or player involved in such a competition would as a consequence not be allowed to participate in any competition organized by FIFA or their respective confederation.”
That would include soccer’s top competition, the World Cup, which is held every four years and the Champions League, which now brings together Europe’s best clubs every year.
In UEFA’s Sunday statement, it referenced FIFA’s threat of action, stressing that Super League clubs “will be banned from playing in any other competition at domestic, European or world level, and their players could be denied the opportunity to represent their national teams.”
UEFA — which oversees all European football — along with the English, Spanish, and Italian governing bodies and the top flight leagues from those three countries co-signed the statement.
“We wish to reiterate that we — UEFA, the English FA, RFEF, FIGC, the Premier League, LaLiga, Lega Serie A, but also FIFA and all our member associations — will remain united in our efforts to stop this cynical project, a project that is founded on the self-interest of a few clubs at a time when society needs solidarity more than ever,” their statement reads in part.
“We will consider all measures available to us, at all levels, both judicial and sporting in order to prevent this happening. Football is based on open competitions and sporting merit; it cannot be any other way.” 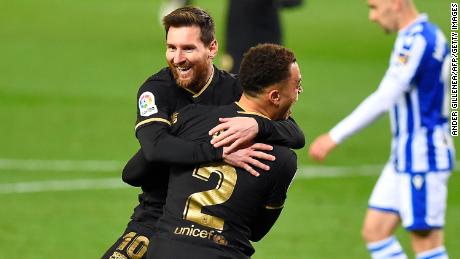 Barcelona pips fierce rival Real Madrid to be named the world’s most valuable club
No German or French club has yet signed up to the Super League. Christian Seifert, CEO of the German Football Association (DFL), said his organization opposes the concept of a European Super League.
“Economic interest of a few top clubs in England, Italy, and Spain should not lead to the abolishment of established structures in European football as a consequence,” Seifert said in a statement.
England’s Premier League, the most watched of the world’s soccer leagues, condemned the Super League plan as a blow to the hopes of the millions of soccer fans who support smaller clubs in England and around Europe.
“Fans of any club in England and across Europe can currently dream that their team may climb to the top and play against the best. We believe that the concept of a European Super League would destroy this dream,” a Premier League statement said.
“It is clear that this would be damaging to English and European football at all levels and will attack the principles of open competition and sporting merit which are fundamental to competitive sport,” said a statement from England’s Football Association, which oversees one of the sport’s oldest and most-storied competitions, the FA Cup.

European political leaders quickly came out against plans for the new league.
“They would strike at the heart of the domestic game, and will concern fans across the country. The clubs involved must answer to their fans and the wider footballing community before taking any further steps,” UK Prime Minister Boris Johnson said.
“The president of the Republic welcomes the position of French clubs to refuse to participate to a European football Super League project that threatens the principle of solidarity and sporting merit,” French President Emmanuel Macron said in a statement, according to Reuters. 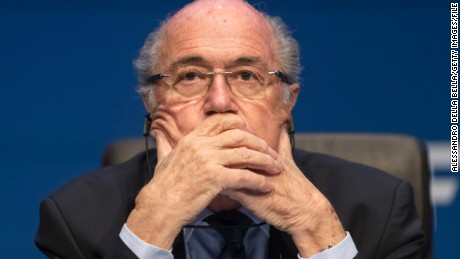 A look at FIFA — international soccer’s governing body
Florentino Perez, president Real Madrid CF and the first chairman of the Super League, disagrees with critics of his group’s potential impact on the sport.
“We will help football at every level and take it to its rightful place in the world. Football is the only global sport in the world with more than four billion fans and our responsibility as big clubs is to respond to their desires,” Perez said in a statement,
The Super League announcement said the global Covid-19 pandemic showed that change was needed to sustain the sport, which has seen revenues damaged as games have been canceled or playing in empty stadiums.
“The global pandemic has accelerated the instability in the existing European football economic model,” the statement said.
“The pandemic has shown that a strategic vision and a sustainable commercial approach are required to enhance value and support for the benefit of the entire European football pyramid,” it said.
The Super League says its founding clubs “look forward to holding discussions with UEFA and FIFA to work together in partnership to deliver the best outcomes for the new League and for football as a whole.”
The organizers of the Super League also announced plans to launch a corresponding women’s league “as soon as practicable after the start of the men’s competition.”

Twelve of Europe’s top soccer clubs have announced plans to form a so-called European super league, in a move that looks set to rock the foundations of the sport’s top competitions, including preeminent leagues in England, Spain and Italy and extending all the way up to the World Cup.