A version of this story first appeared in CNN Business’ Before the Bell newsletter. Not a subscriber? You can sign up right here.
It’s also a wake-up call to regulators about hidden risks within the financial system.
“It is a dereliction of duty for regulators at the Securities and Exchange Commission, the Federal Reserve, the Treasury Department and elsewhere, including most prominently the members of the Financial Stability Oversight Council, to allow these systemic risks to continue to build up unseen and unregulated,” Dennis Kelleher, CEO of financial reform group Better Markets, said in a statement Monday. 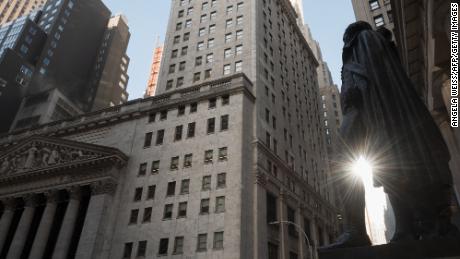 A little-known hedge fund caused widespread chaos on Wall Street
What’s happening: Few people had heard of Archegos before this week. But the investment firm is in the spotlight after its bets on media companies using tons of borrowed money and complex derivatives backfired. That forced lenders on Wall Street to step in and demand that Archegos unwind its positions. Major banks, including Credit Suisse (CS) and Nomura (NMR), now face huge losses from their exposure.
Some market watchers expect fallout from the episode will be relatively contained.
Read More
“This is likely not Long-Term Capital,” Art Hogan, chief market strategist at National Securities Corporation, told my CNN Business colleague Matt Egan. The failure of that massive hedge fund in 1998 threatened the financial system, forcing the US government to intervene.
Others aren’t so sure, reflecting on the collapse of Bear Stearns hedge funds in the summer of 2007.
“We don’t know how far the tentacles go,” said Joe Saluzzi, co-head of trading at Themis Trading. “Early in the Bear Stearns crisis, the market was fine — until it wasn’t.”
Driving these concerns is the fact that there’s no paper trail for Archegos’ holdings with the Securities and Exchange Commission. Bill Hwang, the firm’s founder, ran it as a family office, a type of financial entity that receives little scrutiny from regulators.
Family offices — which were pioneered by finance titan John Pierpont Morgan — are used by the wealthy to manage fortunes and pass money from generation to generation.
Ernst & Young estimates that that private family capital is now bigger than private equity and venture capital put together, and that there are at least 10,000 single family offices around the world.
Historically, family offices were not compelled to register with the SEC under the Investment Advisers Act of 1940 because of an exemption granted to firms with fewer than 15 clients.
The Dodd-Frank reforms passed after the 2008 financial crisis gave the SEC more power to monitor hedge funds and other private fund advisers. But the legislation also allowed family offices to continue to be excluded from the Advisers Act if they are “wholly owned” and “exclusively controlled” by family clients.
There could be pressure to change that rule after the blow-up of Archegos, which has rippled across markets.
“I think the marketplace is entitled to understand what positions they have and what they’re doing,” Doug Cifu, the CEO of Virtu Financial, said Monday in a Bloomberg TV interview.
Watch this space: Greater regulation of hedge funds is already being discussed after the huge run-up in GameStop (GME) shares earlier this year slammed Melvin Capital.
Hedge fund activity is on the agenda when Treasury Secretary Janet Yellen presides over a meeting of the Financial Stability Oversight Council on Wednesday. Thanks to Archegos, perhaps family offices should be, too.

What could happen next with Amazon’s big union vote

One year after workers first stepped inside a new Amazon (AMZN) warehouse in Bessemer, Alabama, a milestone union vote at the facility has come to an end.
Monday was the final day for ballots to be received by the National Labor Relations Board in order to be counted in the election. The vote — a tally of which begins Tuesday — will determine whether the Bessemer workers form the first US union in Amazon’s 27-year history, my CNN Business colleague Sara Ashley O’Brien reports.
For nearly two months, thousands of Amazon warehouse workers have been eligible to vote by mail on whether to unionize. Workers have had to make the decision while sifting through competing messages from union organizers, celebrities and politicians, as well as from Amazon itself, which posted signs in bathroom stalls and pulled workers into meetings before the start of the election period.
The heated back-and-forth around the election intensified in recent days. Sen. Bernie Sanders, who has long been critical of Amazon’s pay policies, rallied with workers at the union headquarters in Birmingham Friday as part of a last-minute push.
“The reason Amazon is putting so much energy to try to defeat you is they know if you succeed here, it will spread all over this country,” Sanders said.
Amazon has maintained that it delivers a “progressive workplace,” touting its $15 hourly minimum wage as proof.
What comes next: If the vote is successful, Amazon would need to come to an agreement with the union on a contract, something that the e-commerce giant could draw out. If it fails, the union may seek to file unfair labor practice claims against Amazon.
“We can already start to see the legal strategy on both sides depending on the outcome,” said Rebecca Givan, a labor expert and associate professor at Rutgers University.

The next time you attend a wedding or concert, visit a place of worship, eat indoors at a restaurant or even go to work, you may need to show digital proof of vaccination or negative Covid-19 test results.
New York has become the first state in the United States to roll out a vaccine verification app, often referred to as a digital vaccine passport. It’s using IBM’s Excelsior Pass, which leans on the blockchain and displays a personalized QR code to verify health status.
The state tested the app earlier this month at a Brooklyn Nets basketball game at the Barclays Center and a New York Rangers hockey game at Madison Square Garden.
Vaccine verification apps could play a key role in helping us get back to normal. But the companies behind them may first need to convince millions of Americans — scarred from years of headlines about data scandals — that these apps don’t pose significant privacy risks, my CNN Business colleague Samantha Murphy Kelly reports.
“Some of these everyday life apps will create a new layer of digital infrastructure that was previously anonymous,” said Albert Fox Cahn, founder and executive director of the Surveillance Technology Oversight Project and a fellow at the NYU School of Law. “You don’t need that type of surveillance to pick up a quart of milk from a bodega.”

The dramatic implosion of Archegos Capital Management is another warning to Wall Street about the dangers of hefty leverage and speculative behavior fueled by rock-bottom interest rates.