Explaining their decision in a lengthy note on Monday, the Holy See referred to same-sex unions as a “choice,” described them as sinful and said they “cannot be recognized as objectively ordered” to God’s plans. The stance is certain to disappoint millions of gay and lesbian Catholics around the world.
“The blessing of homosexual unions cannot be considered licit,” the Vatican’s top doctrinal office, the Congregation for the Doctrine of the Faith, wrote in the statement.
God “does not and cannot bless sin,” the statement added.
Pope Francis, who has frequently been praised for his welcoming tone towards LGBTQ people both within and outside the Church, approved the note.
Read More
The decision is a setback for Catholics who had hoped the institution would modernize its approach to homosexuality. Dozens of countries, include many in western Europe, have legalized same-sex marriages, and the Church’s reticence to embrace LGBTQ people has long held the potential to alienate it from younger followers.
“It is not licit to impart a blessing on relationships or partnerships, even stable, that involve sexual activity outside of marriage, as is the case of the unions between persons of the same sex,” the statement said. 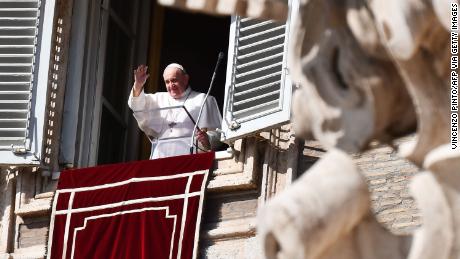 Vatican says Pope’s comments on same-sex civil unions were taken out of context
The statement says that gays and lesbians, as individuals, may receive a blessing if they live according to Church teaching.
But blessing same-sex unions, the Vatican said, would send a sign that the Catholic Church approves and encourages “a choice and a way of life that cannot be recognized as objectively ordered to the revealed plans of God.”
The statement was issued as a “response” to questions from pastors and the faithful on the question. In a commentary provided with the Monday statement, the Vatican insisted that “the negative judgment on the blessing of unions of persons of the same sex does not imply a judgment on persons.”
The decision will alarm those who pinned their hopes of a more open and progressive Catholic leadership on the reformist Pope.
Last year, it seemed that Francis had advocated for civil union laws for same-sex couples when he gave an interview for a documentary.
“Homosexual people have a right to be in a family. They’re children of God and have a right to a family. Nobody should be thrown out or be made miserable over it,” the Pope said, adding: “What we have to create is a civil union law. That way they are legally covered.”
But the Vatican quickly rowed back from those remarks, saying they had been taken out of context and did not indicate a change in doctrine.
This article has been corrected to reflect that the Vatican’s Congregation for the Doctrine of the Faith referred to same-sex unions, not homosexuality itself, as a “sin” and a “choice.” A push alert with the incorrect wording was also sent.

The Vatican said Monday that the Catholic Church would not bless same-sex unions, in a combative statement approved by Pope Francis that threatens to widen the chasm between the church and much of the LGBTQ community.