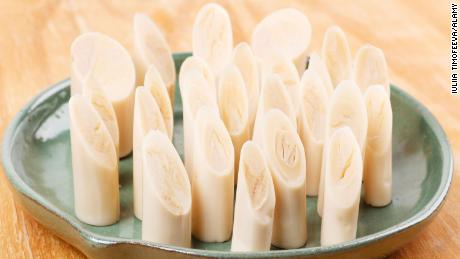 Now, a Brazil-based startup says it has found a solution. Jucai harvests the tree’s berries, rather than its palm hearts, so the tree can remain standing — producing fruit every year and helping the forest to flourish.
Founded in 2015, Jucai works with a network of local farmers and buys jucara berries for its products, including smoothies and sorbets, says Bruno Correa, the company’s general manager.
“The idea from the start was to build a range of products that was not only good quality and nutritious, but also that created a positive, virtuous circle to preserve the tree,” he says.

Farming can help save the forest

The Atlantic Forest is protected by law, says Rafael Bitante, forest restoration manager for the SOS Mata Atlantica, a non-governmental organization that supports reforestation initiatives. However, weak enforcement has led to illegal exploitation of the jucara palm, he says.
That’s where Jucai comes in. Through farming cooperatives, the company works with nearly 900 families in Espirito Santo State, and its reach is extending south into Parana State. Farmers plant new trees, or nurture existing ones, while Jucai oversees logistics and provides the equipment needed to turn the berries into pulp and separate out the seeds — which are then planted. 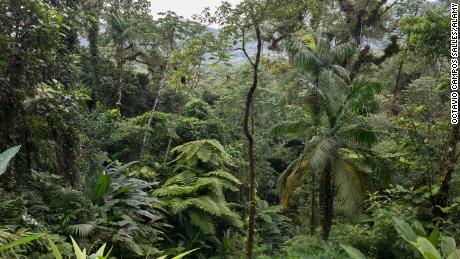 Illegal cutting in the forest is still an issue, but harvesting berries offers a comparable income and is a “clear and straightforward” option for farmers, says Correa. The tree’s economic value incentivizes farmers to preserve it, he says, and that benefits the whole ecosystem.
“The tree is important not only in terms of forest coverage and how it protects the soil but also for the fauna, especially birds,” he says, adding that farmers leave a third of the berries on the tree during each harvest, to support wildlife. 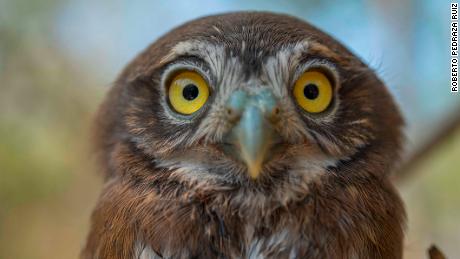 Growing up wild: This photographer captures the beauty of Mexico’s mountains
Others have also seen the value of the living tree. Acai Barbacua, a family-run business, and EcoNativa, an organic farming cooperative, have created networks for local famers to harvest and sell jucara berry pulp.
These jucara projects are a form of “agroforestry.” This approach to land management mixes nature and agriculture, by establishing farms on forest fringes and planting crop-yielding trees on farms and in gardens, says Laury Cullen, a forest engineer with Instituto de Pesquisas Ecologicas, an environmental research organization in Brazil.
Combined with reforested “corridors,” agroforestry zones can provide “stepping-stones” that help wildlife like butterflies and birds move between fragmented sections of the remaining forest, says Cullen.
Agroforestry also benefits communities, says Cullen. In Sao Paulo State, where he works, farmers grow coffee trees beneath the shade of the forest canopy. According to Cullen, biodiversity and canopy coverage have increased, while farmers’ incomes have grown by 26%. 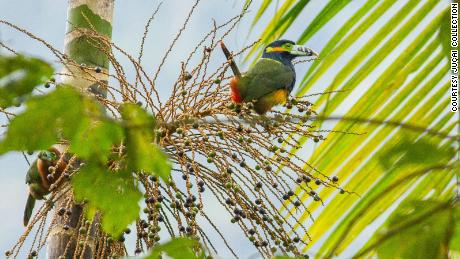 Bitante says the type of sustainable farming Jucai promotes benefits the environment and the economy. “It is essential to strengthen the link between the maintenance of biodiversity and society, valuing the standing forest and guaranteeing the protection of this beautiful biome.”

Jucai hopes that creating a strong market for the jucara berry can help build a better future for the farmers and, in turn, the forest.
Just like the acai berry, the superfood is finding a fan base among the wellness crowd, says Correa. Jucara berries are high in energy-dense fatty acids and packed with antioxidants in the form of polyphenols, known for promoting heart health. A 2020 study on the effect of jucara and acai consumption in healthy adults found that after four weeks, levels of antioxidant enzymes and “good” cholesterol increased. 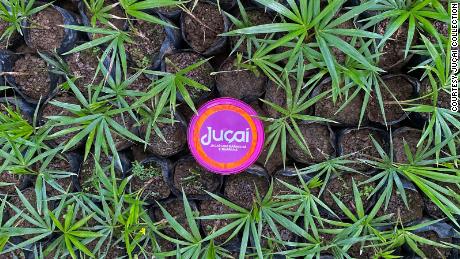 Certified organic and vegan, Jucai currently sells its products in both supermarkets and specialized health food stores in Brazil, Chile and Canada, and hopes to expand into other markets. “People are increasingly aware of what they eat, both from a nutrition perspective as well from a sustainable one,” says Correa.
Since its launch, Jucai has been responsible for keeping around 31,000 jucara palm trees standing, Correa says. For Jucai, preserving the Atlantic Forest and its biodiversity is what drives the business.
“Jucara is the iconic tree of the Atlantic Forest,” he says. “The product only exists because of that sustainability mission.”

Small, round, and midnight blue, you’d be forgiven for mistaking the jucara berry for its superfood cousin, the acai berry, or even the humble blueberry.