In the small, central town of Myaing, police shot into a crowd of unarmed people, killing at least eight, according to advocacy group Assistance Association for Political Prisoners (AAPP). Images posted on social media showed the town’s roads streaked with blood and bodies laying crumpled and lifeless in the street.
In one unverified graphic image, a body can be seen with the head blown apart and brain remnants spilled onto the road.
The shootings in tiny Myaing are further evidence the military junta, which seized power in a coup on February 1, is attempting to crush peaceful opposition to its enforced rule in every corner of Myanmar, not just the big towns and cities.
In the biggest city, Yangon, Thursday, protester Chit Min Thu was killed in North Dagon area, according to Reuters. His wife, Aye Myat Thu, told the news agency he had insisted on joining the protests despite her appeals for him to stay home for the sake of their son.
Read More
“He said it’s worth dying for,” she said. “He is worried about people not joining the protest. If so, democracy will not return to the country.” 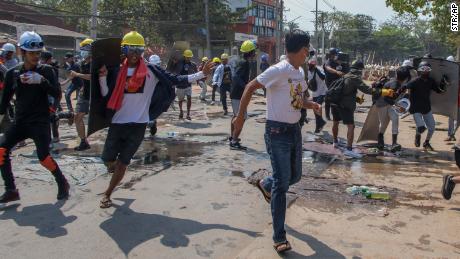 There is evidence the violence is forcing people to flee the country. Between 200 and 300 people have crossed the border from Myanmar into India’s northeastern state of Mizoram, fleeing the unrest, Mizoram’s chief minister told CNN.
That number includes police, civil servants, their family members, and other civilian and the number of people fleeing increases daily, according Chief Minister PU Zoramthanga.
“We (the Mizoram government) are not sending them back as a humanitarian point of view. When somebody enters the land, the country’s border, for fear of their lives we cannot simply send them back. They are not criminals. It is a political issue,” he said.
Zormanthanga added that people are given food and shelter, and many have family in Mizoram. He said it is up to the Indian central government on how to deal with people crossing the border. 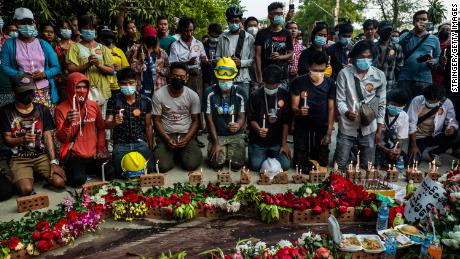 Chan Aye also said the military leadership remains committed to “free and fair multiparty democratic elections.”
But speaking to CNN’s Christiane Amanpour, Kyaw Moe Tun, Myanmar’s ambassador to the UN, said the country doesn’t need fresh elections as the last poll was free and fair.
His comments came after the 15 countries of the UN Security Council unanimously backed the strongest statement since the coup, saying it “strongly condemns the violence against peaceful protestors” and called on the military to “exercise utmost restraint.”
UN diplomats told CNN that China, Russia, and Vietnam objected to tougher language calling events “a coup” and in one draft forced the removal of language that would have threatened further action, potentially sanctions.
In a statement, China’s ambassador to the UN, Zhang Jun, said “it is important the Council members speak in one voice. We hope the message of the Council would be conducive to easing the situation in Myanmar.”
Kyaw Moe Tun said the message “does not meet the peoples’ expectation,” saying up against the brutality of the military “we all feel helpless” and called on the international community for protection.

Bloodshed continues in Myanmar after another violent day Thursday saw at least 12 people killed by the ruling junta, according to a watchdog group, prompting a top UN official to say the crackdown on peaceful protests is “likely meeting the legal threshold for crimes against humanity.”