The following morning, in footage shared to CNN and from witness accounts, among the detritus left scattered around the desecrated grave were razor blades, rubber boots, surgical gowns, shovels, and a bloodied plastic glove.
Angel’s grave had been filled with cement — a thick gray slab in place of flowers and tributes. 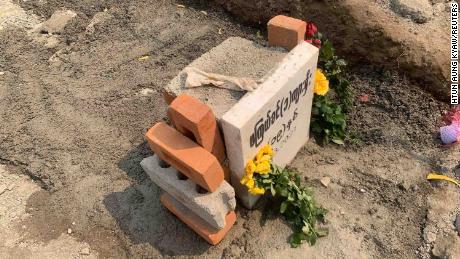 Outrage and grief followed for a second time.
Angel, whose real name was Ma Kyal Sin, died after she was shot in the head in the city of Mandalay on March 3, during a demonstration against the military coup that forced Myanmar’s elected government from power.
Read More
Wearing a T-shirt with the slogan “Everything will be OK,” the 19-year-old quickly became a symbol of the country’s deadly fight for democracy — her image carried high on signs at protests and in artwork shared online. 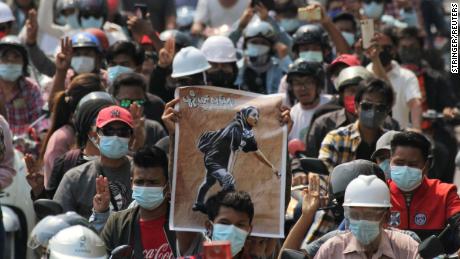 Her struggle was emblematic of a generation fighting for freedom and democracy against a brutal and unrelenting junta that has launched a systematic attack against peaceful demonstrators. At least 80 people have been killed and hundreds injured since the coup, according to the United Nations. More than 2,000 have been detained, with allegations of torture and enforced disappearances. Many have not been heard from since.
The pain of a generation of young people cut down in the streets by armed police and soldiers is fueling a white-hot anger and determination that activists say will not be extinguished so easily.
“We will fight till the end, we will never step back, we will not be scared,” said Min Htet Oo, a friend of Angel’s who was with her when she died.

The day of Angel’s death, March 3, was one of the bloodiest since protests against the military coup broke out, as security forces opened fire on crowds of people across the country, killing at least 38. Images and footage, captured by bystanders, local reporters and citizen journalists, showed bodies lying in the streets surrounded by pools of blood as protesters ran to take cover.
Angel had joined the protests in Mandalay and was part of a core group of activists on the front lines that shielded other protesters from police advances, snuffed out tear gas canisters with wet cloths or led crowds in chanting, according to her friend Min Htet Oo.
“It was very dangerous as we are at the front line and Angel was with us, she was the only girl in the group. She was the bravest, she was the most active one and commanding everyone at the front line,” he said. 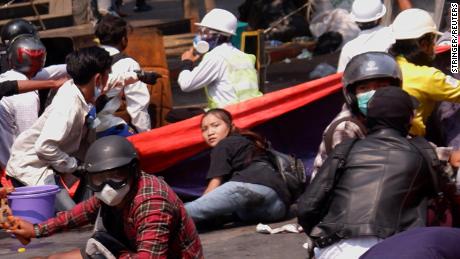 Around noon, demonstrators faced off with security forces down Mandalay’s 84th street. Footage shows Angel shouting: “I’m afraid, but we will fight for our freedom” and “we won’t run.”
About half an hour later, activist videos show Angel and the other protesters retreating and crouching, as the sound of gun shots rings out. In one video before her death, she can be heard yelling: “People at the front, please sit down. You cannot be allowed to die.”
In the moments before she was killed, photographs showed the back of her head turned toward the line of security forces. In a short video, activists say Angel’s arm is visible before she falls to the ground.
Fellow protesters can be seen carrying her to a motorcycle, which races to a makeshift clinic. A doctor pronounced her dead on arrival. The primary cause of death was brain injury caused by gunshot wound, said the doctor, who didn’t want to be named for security reasons.
“She was ready to risk her life way before that day,” said Min Htet Oo.
A few days before her death, Angel had posted a message on Facebook offering to donate her blood and organs to anyone who might need it.
“Her last words were that she was ashamed that she won’t be a dutiful citizen for the country. I asked her what if she died, and she said its worth it if she risks her life to end this system,” said Min Htet Oo.

Concerns of a cover up

Thousands of people attended Angel’s funeral or followed the hearse procession to the cemetery on their motorcycles. Many held up the three-finger salute from the “Hunger Games” movies that has become a symbol of resistance among protesters. 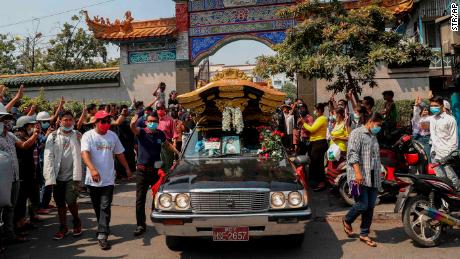 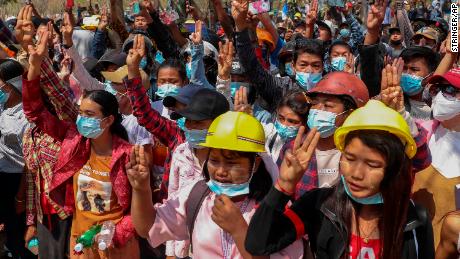 But just hours after she was buried, Myanmar police dug up Angel’s body to perform what they claimed was an autopsy required to investigate the cause of her death.
An eyewitness, who CNN is not identifying for their safety, said between 4 p.m. and 7 p.m., about 20 people arrived at the cemetery gates.
“They got here with a car first and a motorcycle and they pointed with guns and asking to open the gate. There was another car from military at the back,” the witness said.
“I saw a guy opened the gate for them … They said we are not allowed to enter, not allowed to come see, and do not inform anyone about it.”
The witness said they could not see what the group were doing in the cemetery once they entered, but the following morning saw they had “rebuilt the grave,” referring to Angel’s plot.
Footage taken by a passerby showed litter strewn around the grave site, including shovels, a bloody plastic glove and razors, apparently left by police from the night before. 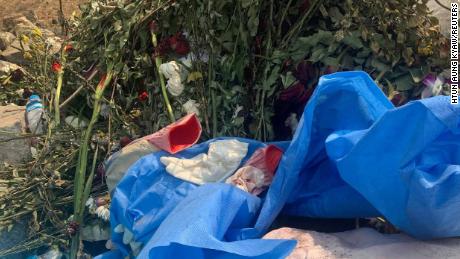 News of the exhumation has shocked many, including the doctor who received Angel’s body after her death.
“In previous cases that we have dug the body for autopsy we need a lot reasons, like there is a complaint or the family allowed to do it or and so on. For this case I think it is disregard with rules and regulations,” said the doctor, who did not want to be named for fear of safety.
Activists had previously raised concerns the military would attempt to cover up how Angel died.
Phil Robertson, deputy Asia director for Human Rights Watch said, “People are hardly ever exhumed in Myanmar to start with, so there was shock the authorities would go this far.”
“But going without notice, in the middle of the night, is a symbolic recognition of the changing rules of the game, because the soldiers and police didn’t want to be filmed doing their dirty work,” he added.
The Myanmar Police Force said it needed to investigate Angel’s death but her family had not consented to an autopsy. In a statement in state media, police said her body was exhumed “with the permission of a judge, district police chief officials, forensic pathologists and witnesses.”
The military junta has sought to distance itself from her death, saying security forces used “minimum force” to disperse protesters that day. The conclusion from the police’s autopsy on March 4 was that the 1.2 centimeter (0.48 inch) long and 0.7 centimeter (0.28 inch) wide piece of lead lodged in Angel’s head, just behind her left ear, did not come from a police bullet.
“The lead piece found in the head was a type of ammunition that can be fired with a shotgun with 0.38 round of ammunition,” the police statement said, adding that it “is different from the riot control bullets used by the Myanmar Police Force.” 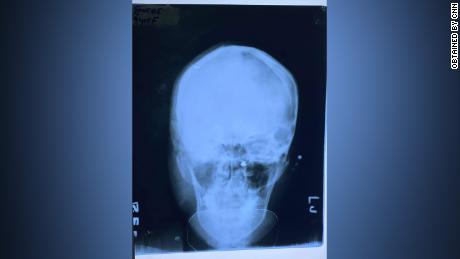 The police appeared to further distance themselves, saying although their forces were “in a face-to-face position to the crowd, the injury was in the back of the deceased person.”
“Those who do not want stability in the country are attempting to escalate the conflict,” the police said.
But an activist video, filmed moments after Angel’s shooting and on the same street where she was fatally wounded, shows a member of the military, firing what appears to be a rifle at the protesters.
Human rights observers raised concerns the junta went to the lengths they did over Angel to try and conceal their actions and to avoid turning her into a martyr.
“The Tatmadaw is willing to kill scores of protesters but they are afraid of making martyrs, and they saw Kyal Sin was rapidly becoming one. So in typical ham-fisted, military style they did their midnight exhumation to justify a coverup medical finding that no one believes,” said Robertson.
“The only people out on the street that day with guns were the army and the police, and there were plenty of people who saw her shot and die. By desecrating her grave and her memory, all the authorities did was further stoke the justifiable outrage at her death, and raised her profile even more.”
Angel’s family has not spoken to the media since her death. When CNN reached out, a family member said they would not comment on her death or graveside autopsy for fear of repercussions. 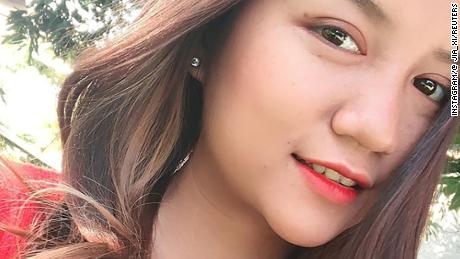 The teenager — who loved to dance, film Tik Tok videos and train in taekwondo — will be remembered as a symbol of defiance, her friends say.
“She liked to live freely, she was a good-hearted girl,” said Min Htet Oo. Like many protesters, he is in hiding — protesting by day and trying to evade security forces who come patrolling at night.
“She has fallen by helping others. She risked her life for the democracy of Myanmar,” he said.

Hours after her family, friends and thousands of mourners laid Angel’s body to rest, Myanmar’s security forces entered the cemetery under the cover of darkness, dumped the carefully placed flowers and wreaths, and dug up her grave.