This proposal follows a recent CNN investigation which revealed that not a single oil tanker has been able to dock in the Houthi-controlled port of Hodeidah this year because of the blockade enforced by Saudi warships. CNN’s investigation triggered calls from the UN Yemen Envoy Martin Griffiths and WFP Chief David Beasley for Saudi Arabia to lift its blockade and allow fuel into the country.
Saudi Foreign Minister Prince Faisal bin Farhan told Saudi State-TV on Monday that the initiative aimed to “end the conflict” in Yemen and would look to implement a countrywide ceasefire, open Sanaa airport and allow ships carrying oil to enter the Hodeidah port. 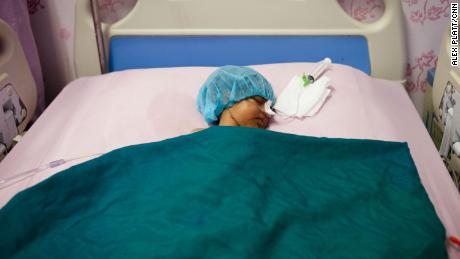 Famine has arrived in pockets of Yemen. Saudi ships blocking fuel aren’t helping
His statement marked the first time that Saudi Arabia has publicly acknowledged obstructing fuel ships into Hodeidah, which the UN calls “unacceptable” on humanitarian grounds. The blockade has starved the Houthis of income from oil taxes — but has also critically hampered humanitarian agencies’ ability to deliver aid, including food, as famine creeps into the country.
Saudi Arabia said that the initiative is pending acceptance by both the Houthi rebels and Yemen’s internationally recognized government, which has Saudi backing.
Read More
“We hope the Houthis will accept this initiative this time, to avoid the spilling of Yemeni blood,” Prince Faisal said.
Houthi Vice Minister for Foreign Affairs Hussin Al-ezzi told CNN the blockade needed to be lifted first, before they would agree to enter peace talks.
“If they [Saudi Arabia] lift the blockade and open the airport then there will be a supportive atmosphere for the entering into negotiations and reaching credible conclusions.”

The latest attempt to establish a ceasefire

The Saudi-led coalition has intensified airstrikes over Yemen in recent weeks, hitting dozens of targets, including the capital Sanaa and a grains port on the Red Sea coast.
Houthi rebels have also ramped up attacks on Saudi Arabia over the past few months, launching almost daily explosive-laden drones and ballistic missiles targeting airports, military bases and key oil facilities.
The Iran-aligned Houthi group controls northern Yemen, including the capital Sanaa and the strategic port city of Hodeidah, and has been at war with a Saudi-led military alliance since 2015.
The initiative announced Monday is the latest of several attempts to establish a ceasefire between Yemen’s warring parties. The UN has been part of stalled years-long negotiations between the opposing sides. More recently, the US Secretary of State Anthony Blinken received no response after offering peace talks to the Houthis.
According to State Department spokesman Ned Price, Blinken spoke to the Saudi Foreign Minister on Monday about Yemen, discussing the need for all parties to support peace efforts, commit to a ceasefire, and facilitate the delivery of humanitarian aid.
President Joe Biden announced earlier this year that the US would end support for Saudi Arabia’s offensive operations in Yemen, in a move hailed by lawmakers as “historic.” The United States has not however publicly rescinded its support for the Saudi blockade.

Saudi Arabia’s top diplomat announced on Monday a proposal to end the six-year conflict in Yemen, including an offer of a ceasefire and political agreement with the Iran-backed Houthi rebels who control strategic parts of the country.