The “Kill the Bill” protest was denounced by the government and local lawmakers after protesters clashed with police, attacking a police station and leaving some officers with broken bones on Sunday evening.
“Thuggery and disorder by a minority will never be tolerated,” the UK’s Home Secretary, Priti Patel, tweeted, calling the scenes “unacceptable.”
The event had begun as a demonstration against Prime Minister Boris Johnson’s flagship policing bill, which critics say would hand the police and ministers powers that could seriously curb the ability of citizens to protest peacefully.
But tensions escalated as the protest wore on Sunday, leading to violent scenes that have been condemned by officers and lawmakers across the political spectrum. 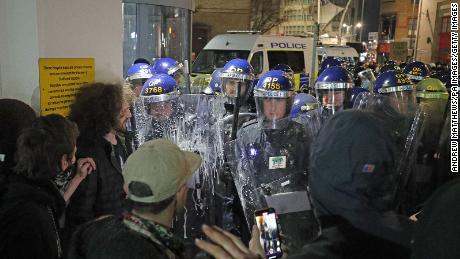 Read More
“Officers have been subjected to considerable levels of abuse and violence. One suffered a broken arm and another suffered broken ribs. Both have been taken to hospital,” Avon and Somerset Police said Sunday night. “They should never be subjected to assaults or abuse in this way. At least two police vehicles have been set on fire and damage has been caused to the outside of the station.”
Andy Roebuck, chairman of the Avon and Somerset Police Federation, called the protesters “a mob of animals,” while the national chairman of the Police Federation of England and Wales, John Apter, questioned their motives. “This is not about protecting the right to protest, it’s violent criminality from a hardcore minority who will hijack any situation for their own aims,” he said.
And local Member of Parliament Darren Jones, from the opposition Labour party, said: “You don’t campaign for the right to peaceful protest by setting police vans on fire or graffitiing buildings.” 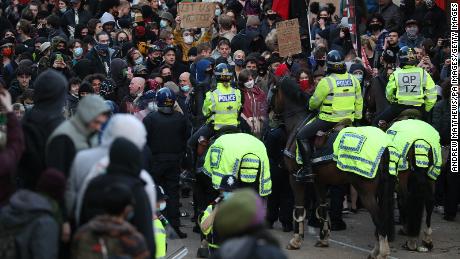 The proposed policing bill, along with the violent break-up of a vigil to a murdered woman last weekend and the arrest of a serving police officer on suspicion of her murder, has put relations between British police and much of the public under severe strain.
Metropolitan Police officer Wayne Couzens was charged with the kidnap and murder of Sarah Everard earlier this month, in a case that has been intensely followed and led to a renewed national discussion about intimidation, harassment and violence against women.
But the police became subjects of ire, too, when they moved in on a peaceful vigil to Everard in south London on March 13 and appeared to force women to the ground, an approach that has led to a review and cast scrutiny on pending legislation that would boost their powers to dismantle protests and mass gatherings in the future. 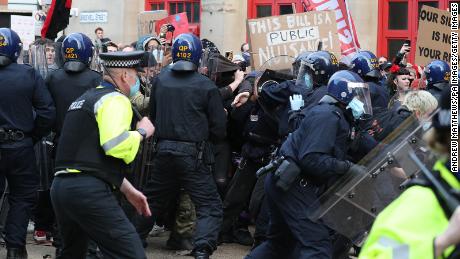 Bristol’s mayor, Marvin Rees, said he had “major concerns about the Bill myself, which is poorly thought out and could impose disproportionate controls on free expression and the right to peaceful protest.”
But he condemned violent demonstrators in his city for making it more likely that the bill would pass. “Smashing buildings in our city center, vandalizing vehicles, attacking our police, will do nothing to lessen the likelihood of the Bill going through. On the contrary, the lawlessness on show will be used as evidence and promote the need for the Bill.” 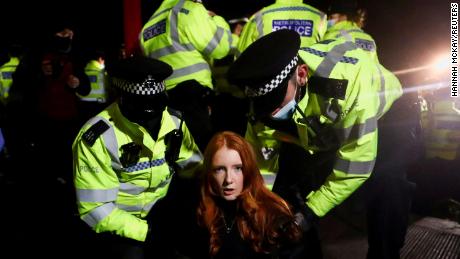 The bill was debated in Parliament last week. It suggests, in somewhat vague language, that demonstrations and protests should not “intentionally” or “recklessly” cause “public nuisance,” and elsewhere says that damage to monuments could carry a punishment of up to 10 years in prison — a clause seen as a response to Black Lives Matter protesters, who tore down or condemned statues of slave traders in Bristol and elsewhere last year.
At the top of a fact sheet for the bill on the government’s website, Cressida Dick, Metropolitan Police Commissioner, is quoted as saying that ever since the Extinction Rebellion climate change protests in London, police forces have needed “change to powers and to legislation that would enable the police to deal better with protests” that “are not primarily violent or seriously disorderly,” but “had an avowed intent to bring policing to its knees and the city to a halt.”

Officials have condemned violent scenes at a protest in Bristol, England that left police officers injured and vehicles ablaze, as tensions mount between law enforcement and activists over a controversial crime bill that could curtail people’s ability to demonstrate.