The Pope visited Ur on Saturday, the second day of the first ever papal visit to Iraq. Addressing a meeting of inter-faith leaders, Francis condemned the violence that has plagued Iraq in recent years and called for friendship and cooperation between religions.
“All its ethnic and religious communities have suffered. In particular, I would like to mention the Yazidi community, which has mourned the deaths of many men and witnessed thousands of women, girls and children kidnapped, sold as slaves, subjected to physical violence and forced conversions,” he said. 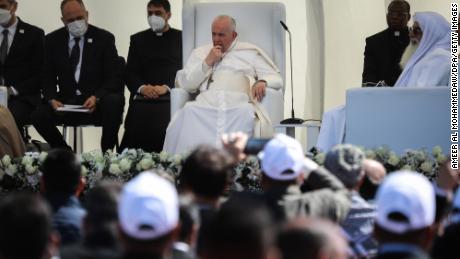 Pope Francis has held a historic meeting with revered Shia Muslim cleric Grand Ayatollah Ali al-Sistani on the second day of the pontiff’s visit to Iraq.

AP explains why it fired Emily Wilder for pro-Palestinian tweets

WHO Africa encourages the use of AstraZeneca vaccine despite variants

The Americans who bought a house in Italy over the internet

How a garage filled with dusty old machines is helping South...