The fire destroyed at least 3,000 shelters as it tore through the camp, Rashedul Islam, an official in charge of Kutupalong refugee camp, said Tuesday.
“I don’t know what is the exact number of the (dead) children, but (the death toll), including children, is five,” he said. “At this very moment we are trying to identify how many people have been sheltered.”
Fire services, Bangladesh’s Refugee Relief and Repatriation Commissioner, and rescue and response teams remained at the scene on Monday evening, where they continued to try to control the fire and prevent its further spread, the UN refugee agency UNHCR said late Monday afternoon local time.
Antonio Vitorino, Director General of the UN’s International Organization of Migration (IOM), said “tens of thousands of Rohingya refugees are affected.”
Read More
“I am deeply concerned by the impact of a terrible fire today in Cox’s Bazar, Bangladesh,” Vitorino said, adding that “IOM teams and partners are working together to respond to the crisis and ensure the safety and well-being of all.” 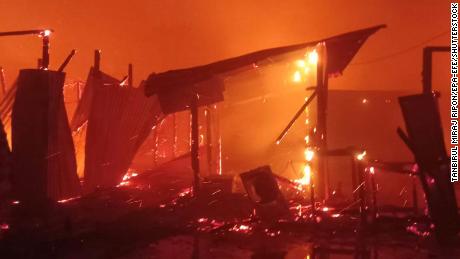 Images from witnesses showed a massive blaze consuming huts and scores of refugees fleeing on foot. The cause of the fire has not yet been determined.
“The fire spread so quickly that before we understood what happened, it caught our house,” said Tayeba Begum, a Save the Children volunteer who witnessed the fire. “People were screaming and running here and there. Children were also running scattered, crying for their family. It is the most horrific incident I have witnessed recently.”
Monday’s blaze marks the largest of multiple fires that have plagued the camp this year alone, Onno Van Manen, the country director for Save the Children in Bangladesh said.
“It is another devastating blow to the Rohingya refugees who live here. Just a couple of days ago we lost one of our health facilities in another fire. The risks of fires in these extremely densely populated and confined areas are enormous,” Van Manen said. 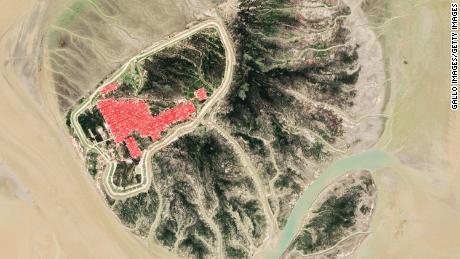 Fears of forced removals as Bangladesh moves hundreds of Rohingya refugees to remote island
Estimates of the number of Rohingya refugees living in Cox’s Bazar range from 800,000 to more than 900,000, according to the UNHCR and Save the Children.
Most of the refugees have fled from persecution in neighboring Myanmar.
In 2016 and 2017, Myanmar’s military launched a brutal campaign of killing and arson that forced more than 740,000 Rohingya minority people to flee into neighboring Bangladesh, prompting a genocide case to be heard at the International Court of Justice. In 2019, the United Nations said “grave human rights abuses” by the military were still continuing in the ethnic states of Rakhine, Chin, Shan, Kachin and Karen.
Myanmar denies the genocide accusations, and maintains the “clearance operations” by the military were legitimate counter-terrorism measures.

A fire has swept through a sprawling Rohingya refugee camp in Cox’s Bazar, Bangladesh, destroying shelters and endangering the lives of tens of thousands of refugees, the UN refugee agency UNHCR reported Monday.